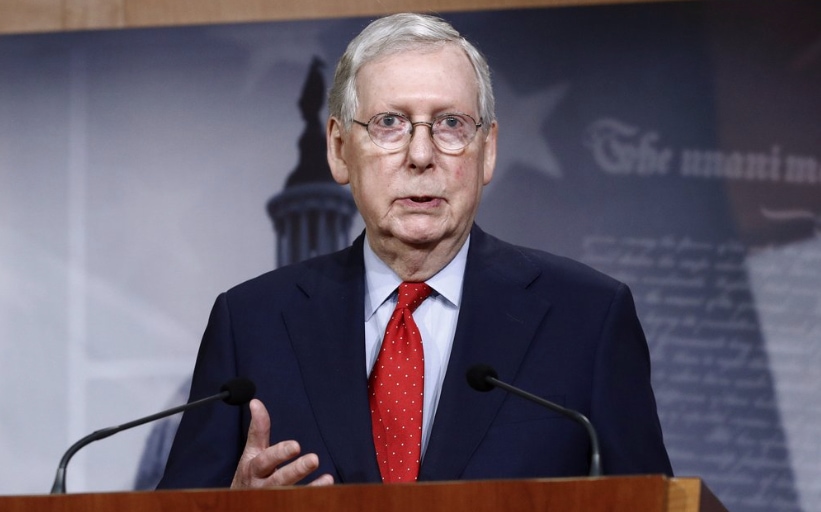 About-face comes after criticism on his suggestion states should be allowed to go bankrupt.

Reversing course, Senate Majority Leader Mitch McConnell said Wednesday he is “open” to considering additional funds for state and local governments in the next coronavirus relief bill as Democrats seek more than $500 billion to cover costs of police, fire and other front-line workers.

But McConnell insisted the new package must include federal liability protections from what he warned will be an “avalanche” of lawsuits against businesses that reopen during the pandemic.

“There’s no question all governors, regardless of party, would like to have more money, I’m open to discussing that,” McConnell said on Fox News Radio.

The about-face from the Republican leader comes after governors across the country heaped criticism on his suggestion that states should simply be allowed to go bankrupt.

Chief among them was New York Gov. Andrew Cuomo, who urged the nation’s political leaders on Wednesday to support the states, including thousands of doctors and nurses who descended on New York to help in the crisis.

“You have human suffering, you have people dying. You can’t stop the politics, even in this moment?” Cuomo, a Democrat, said during a press briefing.

As Congress delves into the next round of aid, Democrats are putting forward their own priorities, including a new effort Wednesday to federalize the nation’s medical supply chain.

Senate Democratic leader Chuck Schumer said new rules are needed to prevent the favoritism some argue the Trump administration used in handing out vital gear during the health care crisis. The proposal would rely on the Defense Production Act to ensure adequate supplies.

President Donald Trump’s “failed leadership” during the crisis “has put our frontline health care workers in a scavenger hunt for their lives and forced Governors to bid against each other for desperately needed resources,” Schumer said in a statement.

McConnell said Wednesday as the new package takes shape he wants to prevent “the second pandemic — which is going to be lawsuits against doctors, nurses, hospitals and brave business people opening up.”

House and Senate leaders are reaching beyond the nearly $3 trillion already provided to fight the pandemic crisis even as they face the stark, startling reality that Congress may not be able to fully resume for a year.

McConnell is reconvening the Senate next week, but House Speaker Nancy Pelosi dropped plans for her chamber to return after a revolt from lawmakers and a warning from the Capitol physician that the health risks of reconvening the 400-plus representatives were too great.

“We’ll practice the proper safeguards,” McConnell said. “We’re not going to sit on the sidelines.”

Senate Republicans are planning to hold their regular Tuesday lunch, in what will perhaps be one of the largest gatherings in the area.

McConnell’s office would not say if he consulted with the Capitol physician on his plans to resume Senate operations.

It’s not just the elected officials at risk. The U.S. Capitol is a throwback of crowded hearing rooms, packed hallways and thousands of congressional staff crunched in office cubicles and cafeteria lunch lines — all unwelcome in the new era of social distancing. It additionally relies on an army of cooks, custodians, electricians and police, who keep the iconic domed building and sprawling maze of offices running.

The House and Senate sergeants at arms extended a halt in public tours through mid-May.

Closing normal operations for weeks, months or even longer seems unthinkable to some, more dire than actions taken during the deadly 1918 Spanish flu or the Sept. 11 attack. There really is no direct comparison in U.S. history.

Trump scoffed from the White House that the stay-home House members were “enjoying their vacation.”

Pelosi quipped later on MSNBC that a freezer full of ice cream was “better than Lysol in the lungs.” Hers was an attack on Trump’s suggestion — which raised alarm among health care professions — that disinfectants could help clear the virus.

While frustrated lawmakers long for what’s being lost as a co-equal branch of government, many are also older and in high-risk categories that make them more vulnerable to COVID-19. Some care for children and families. Most have to commute from their states while airlines are running fewer flights.

The Capitol physician has privately warned key lawmakers it will be at least a year before Congress can return to business as usual.

As lawmakers envision the new norm in Congress, one top priority for both parties is to reopen their committees to conduct oversight of the coronavirus relief and to draft legislation, including the next virus aid package.