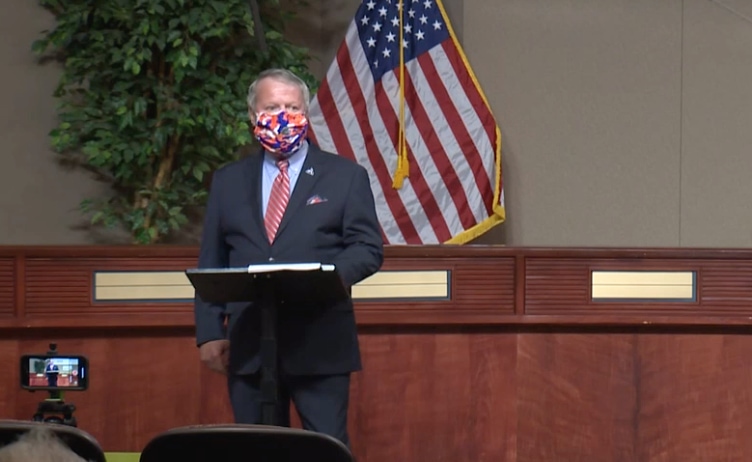 Restaurants and retail businesses in Orlando will be allowed to provide more outdoor dining and retail, including into parking areas and, soon, public rights of way.

Orlando Mayor Buddy Dyer announced a series of immediate initiatives plus efforts he intends to take to the Orlando City Council to make reopening such businesses a little more expansive than interior space would allow under guidelines still requiring strict social distancing.

“Today marked the start of (Gov Ron DeSantis‘) phase one of the statewide reopening, and in the last few weeks the city has been working with local businesses to get them on the path of recovery,” Dyer said. “As a result today we announced immediate actions that we are taking to allow businesses within the city limits to temporarily expand their operational space and offer their businesses outside.”

— Authorizing small tents to accommodate sales and seating outside.

— Granting businesses the ability to use banners and extra signage.

Those changes went into effect immediately Monday as DeSantis’ phase one order offered the first steps, statewide, for restaurants to begin providing on-premise dining and for other retail businesses to open again, for the first time since they were shut down through local and state orders.

Businesses reopening still face some restrictions, including Orange County Mayor Jerry Demings‘ order that employees working within 6 feet of others wear face masks. Demings has continued to pursue broader reopening changes for the county through his Orange County Economic Recovery Task Force, which continues to develop final recommendations for standards, and to prepare for a phase two of reopening.

Next Monday, Dyer said, he will ask the City Council to authorize businesses to safely expand sales and seating into public rights of way and to approve a program for the city to cover the cost of parking in city garages and on the street outside of businesses.

Dyers’ initiatives follow those of other cities, notably Edgewood, the southern Orange County city that announced a similar set of initiatives last week.