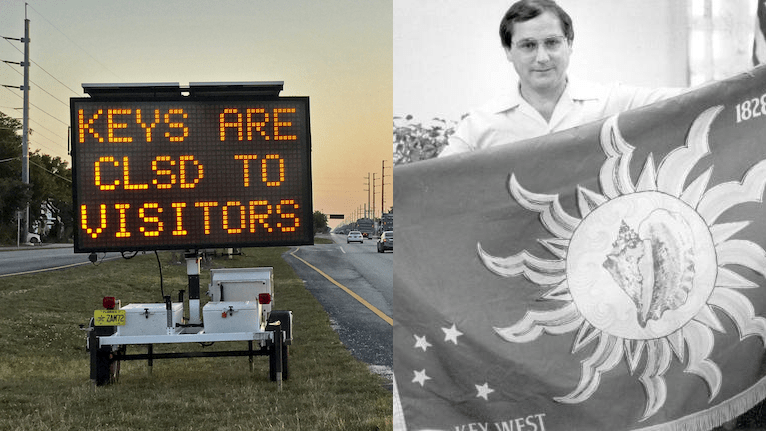 The secession of Key West in 1982 became an instant and precious piece of Florida lore. The historical tidbit produced the Conch Republic, branding still prominent on T-shirts and tchotchkes sold at booths up and down Duval Street.

But a forgotten part of the historic event almost lost to the marketing became the catalyst itself. U.S. Border Patrol, concerned about illegal immigration and drug smuggling, set up a road blockade on U.S. 1 and searched every vehicle entering or leaving the Florida Keys. Traffic backups crippled commerce on a community depending on tourism as its faraway leading industry.

It’s ironic to many a business owner on the Keys then that an entirely different blockade hinders island tourism in much the same fashion as the Ronald Reagan-era policy. But this time, it’s local government stopping traffic, fearful not of human traffickers but a deadly coronavirus.

Monroe County leaders say when neighboring Miami-Dade County becoming a national hotspot for COVID-19 infections, it was important to isolate the islands.

“We had to do what we could to dampen down the virus,” said Monroe County Mayor Heather Carruthers. “And as we have seen, we have been very successful.”

While a checkpoint will cease operations on June 1, county leaders say it could be put back up again in the event of a spike in infections or signs of spread of the disease from Miami-Dade to Monroe.

But business leaders impacted by the extreme measure say government leaders not only over-reacted but reached beyond what’s allowable under the Commerce Clause.

“Monroe County is violating law by preventing interstate commerce as they were not excluded from the most recent executive order of Phase 1,” said Jordan Letschert of TTJ Investments. “As such, 16,500 hotel rooms and employees remain closed. Some restaurants forever closed. Residents forget a road block was why the Conch Republic wanted to secede. And now they have a block.”

Even through the Civil War, Key West as a community remained a part of the proper United States. The island served as a Union outpost after Florida seceded from the Union. So it was quite the step in 1982 when Monroe County’s most prominent locality announced its own secession, according to the Florida Historical Society.

After losing a case in federal court to end the road blockade, Key West Mayor Dennis Wardlow announced on the courthouse steps that if federal agents were going to treat U.S. 1 like the border to a foreign nation, it might as well become one. The next day, he declared himself Prime Minister of Key West at a City Council meeting and declared war on the United States, following up with the act of aggression of hurling stale Cuban bread loaves at a man dressed in a Naval uniform.

The revolution would be short-lived. Wardlow quickly traveled, with reporters in tow, to the Naval Air Station Key West to surrender to his foreign adversary, but demanded a billion dollars be provided in aid to the Conch Republic following the long American siege.

The story not only earned national media attention but came to define a sense of strident independence within the highly isolated island destination.

But with the Conch Republican once again on the other side of a road checkpoint from most of Florida, businesses fed up with lockdown say the lessons of history should be taken more seriously.

“It is ironic that Key West’s faux, tongue-in-cheek succession (which branded itself and, later, the entire county, as the “Conch Republic”) was due to the U.S. Border Patrol’s implementation of a roadblock on US.. 1, south of Florida City, and represented the community’s objection to being treated as a foreign nation,” said attorney Alan Fowler, “and now, our own county government has implemented a roadblock, functionally creating a border crossing that prohibits entry from unauthorized persons.”

Fowler represents Bettina and Jonathan Haim, business owners who argue the roadblock worsened the hit to their retail business delivered by the coronavirus crisis.

“Mr. and Mrs. Haims’ businesses have been dramatically impacted by the County’s banning of visitors, like all businesses in the Florida Keys,” Fowler said. “It seems only government employees have been un-impacted, and many county employees recently received special pay.”

And they aren’t the only irritated business owners. Letschert, a member of the board of trustees for the Florida Democratic Party, said the blockade has actually done less to stop individuals living in Miami from accessing the island but plenty to the tourism industry. His family holds a family interest in Galleon Resort and Marina.

“The blockade itself is a bit of a political show,” he said. “The right lane was open for commercial traffic, who can come on the islands, and for residents. It’s not truly quarantining off from the rest of the world.” While a ferry connecting Fort Myers Bach and Key West hasn’t traveled amid the restrictions, Letschert said those with private planes simply bypass the checkpoints by air. But the policy has effectively shut out nearly all tourists, the economic lifeblood of the island.

Fowler plans to bring the Haims’ lawsuit to court in June, even after the roadblock stops. That’s in part because he wants to prevent another action being taken in the future. And for what it’s worth, government leaders on the island maintain they have the right to do just that if fall or winter brings a second spike in COVID-19 cases.

Monroe County officials on March 24 issued the order to close down the Florida Keys Overseas Highway, with traffic blocked as of March 27. The action was a step unparalleled in Florida, but perhaps for a Levy County decision to close down the much smaller Cedar Key amid the health crisis; that island reopened to visitors as of May 4.

Carruthers maintains the checkpoint — her office corrects quests about the “roadblock” — was a necessary move. She points to the vast difference in coronavirus infections on the Keys compared to nearby Miami.

Nearly 17,000 of Florida’s more than 50,000 diagnosed cases of COVID-19 are for Miami-Dade County residents or visitors diagnosed while there, and as of Saturday, 629 Miami-Dade residents had died.

The Keys, of course, have fewer residents, but there are also only two hospitals on the island, Carruthers notes. The tiny number of cases has never stressed the infrastructure there, but had on outbreak put heavy demands on facilities, the isolation of the Keys would made it difficult to simply transport patients to the mainland.

“We are at the doorstep of the three counties in Florida with the greatest number of cases,” she said.

Rep. Holly Raschein, a Key West Republican, has seen her office besieged with phone calls both in favor and against the roadblock.

“The input has run the whole gamut,” she said. “There’s folks that never wanted it to go up, and folks who want it to stay up forever. Welcome to the Keys.”

Raschein provides county government’s number if people call with irate questions about the policy. The controversial direction wrought countless questions about commercial regulation, local restrictions on a federal road and even racial profiling of drivers at a time when only residents are allowed to be in the community.

The state lawmaker has some concerns the move may have artificially stifled the local economy. But from a public health point of view, she notes, stopping traffic on U.S. 1 provided remarkable results. It may have seemed like a dramatic move, but it worked.

And unlike any other major locale in Florida, it was an easy task for an island government to pull off.

“We are able to isolate ourselves from the mainland,” she said. “And quite frankly, we are one of the only counties and communities in the state that can.”

Carruthers ultimately dismisses the comparison of the existing checkpoint on U.S. 1 to the Border Patrol disruption in 1982.

“That particular blockage was based on an assumption everyone coming into and leaving the Keys was involved in the drug trade,” the Mayor said. “This was the whole thing of a county on the other side of the checkpoint being infected.”

As for public opinion, her office has received far more calls in favor of the policy than opposed, maybe a 9-to-1 ratio. Islanders themselves always hold an uneasy relationship with tourists who pile onto the island off cruise ships and crowded buses.

If necessary, Carruthers is prepared to set the checkpoint up again after June 1. But she said the policy isn’t one she takes at all lightly. “This entire pandemic is the most stressful thing I’ve ever faced in my years of public service,” she said. Halfway through her third term in office, she counts closing the highway to non-residents as the toughest decision she’s ever made.