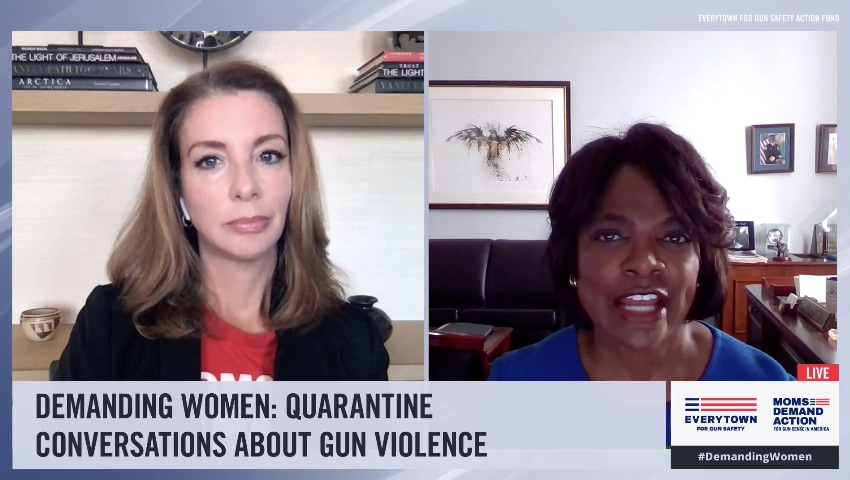 'The nation is on fire and the President is standing there with gasoline.'

In an Facebook forum hosted by two gun law reform groups Friday, Demings, who is being considered for a vice presidential running mate for Democrat Joe Biden, discussed the President’s tweets relating to the Minneapolis police slaying of George Floyd and the subsequent protests that have led to violence and spread to other major American cities.

“These THUGS are dishonoring the memory of George Floyd, and I won’t let that happen,” Trump tweeted just after midnight Friday. “Just spoke to Governor Tim Walz and told him that the Military is with him all the way. Any difficulty and we will assume control but, when the looting starts, the shooting starts. Thank you!”

“This President, time and time again, demonstrates that he is totally unfit for the office he holds,” she said.

“To hear that coming out of the mouth, or the brain, of the President of the United States is disgraceful or sad or disgusting,” Demings said.

Trump’s “when the looting starts, the shooting starts” line was a direct quote borrowed from comments made 53 years ago, when then-Miami Police Chief Walter Headley reportedly discussed his plans to crack down on the city’s black neighborhoods if there was any trouble during a Republican National Convention.

Responded Demings Friday: “America is on fire. And I mean that literally. This isn’t just about what’s happening in Minnesota. This is about America as a nation. The nation is on fire. And the President of the United States is standing there with gasoline.”

She was speaking on a weekly forum in the “Demanding Women” conversation series, billed as a discussion of gun violence in the time of a pandemic, and hosted by Everytown for Gun Safety Action Fund and Moms Demand Action.

“In a tragic time like this, when we look to our leaders to unify us, to be a bridge-builder, to bring compassion and peace and calm, but also accountability, if  he wants to bring America together, then talk about what justice looks like. Talk about the persons involved needing to be held accountable. Talk about moving forward and how we need to build community and build relations among different ethnic lines,” she continued. “But once again, this President does not have it in him to rise to the occasion.”

There have been riotous scenes in Minneapolis, with buildings, including a police precinct, being torched, and stores smashed and looted. Looting also has been reported in other cities, including Columbus, Ohio, and Louisville, Kentucky, as frustration boils over the Floyd case.

For that reason, Twitter put a warning label on Trump’s tweet signifying that it glorifies violence. When the White House expressed defiance by repeating the President’s tweet later Friday under the official government Twitter amount, Twitter labeled that with a warning too.

Demings expressed exasperation at the logic behind Trump’s statement.

“It is sad to even suggest that property is somehow equal or more valuable than a human life,” she said.