It was a good week for Florida Republicans, but not so hot for relations with China.

We devote this particular space to choosing the winners and losers of the week in Florida politics. And we’ll get to that in a moment because on that front there was some good news.

Actually, on Saturday there was extraordinary news (spoiler alert in T-minus: 10-9-8 …)

But we also know what else is going on, and it’s far from good.

Just when we all thought COVID-19 might be leveling out, with people headed back to work and the stock market trending in the right direction, rage erupted across the land.

It shows no signs of stopping, and we know why, too.

The death of George Floyd at the hands — well, knee — of Minneapolis police led to riots,  fires, and destruction across the land.  That former cop was arrested Friday and charged with murder, but the destruction in multiple cities continues, and it’s outrageous.

That’s not an acceptable way to protest, and there’s no “but” about that.

I mean, rioters trashed downtown Atlanta, where the civil rights movement started. The College Football Hall of Fame there was smashed and looted. That’s despicable, and, even worse, it obscures what the protest is about.

Florida Attorney General Ashley Moody and the Florida Sheriff’s Association properly condemned the actions of the Minnesota cops, and we all should.

Coming on the heels of the murder of Ahmed Aubrey in Georgia and other incidents of blacks being attacked for being black, this demands a long-overdue reckoning coming about the kind of nation in which we want to live.

This garbage with targeting blacks has to stop, but so does the rioting and looting.

Normally, we choose three winners and three losers, but this week we’ll make it four winners and two losers. That’s how we roll here sometimes but just deal with it.

Second honorable mention: Gov. Ron DeSantis. The Governor is feeling feisty these days as Florida methodically reopens, but we can understand why. Seize the moment. He took a pounding in the media for what many believed was a too aggressive plan, but about a month into this, things are working as well as can be hoped.

Theme parks have plans to reopen, and behavior on the beaches seems relatively tame. Universities are planning in-person classes this fall. And professional sports are mapping out plans to resume play.

He has turned this into a victory tour of sorts, but we probably shouldn’t begrudge him that.

That is, at least as long as the virus that caused all this havoc doesn’t decide to be a pain again.

First honorable mention: Val Demmings. She appears to be on a shortlist of possible Vice President choices for Joe Biden.  Her profile has been steadily rising in recent months and, oh yeah, she comes from a state with 29 electoral votes and a history of close presidential races. Choosing her might just be enough to tip Florida into the blue column in November, and that’s what it’s all about for Democrats.

Almost (but not quite) biggest winner: A gaggle of Florida GOP lawmakers.  What, you say? We’re talking about the 2024 election already? Can’t we get through this one first?

I guess not because Rick Scott and Matt Gaetz aren’t waiting, and we shouldn’t be surprised. Scott is throwing sharp elbows about what he calls the failure of Democratic governors throughout the country. He also has a well-oiled organization that is setting him up for a national run, and it’s looking increasingly likely that he has that in mind.

Gaetz,  meanwhile, jumped on the Twitter controversy with President Donald Trump. He filed a complaint with the Federal Election Commission against Twitter, and then doubled down on the specifics of that in his new “Hot Takes with Matt Gaetz” podcast.

And we can’t forget Wilton Simpson. The incoming Senate President didn’t see eye-to-eye with fellow Republican Tom Lee, and everyone knew that. On. Friday, Lee formally announced his resignation from the Senate, effective in November.

Simpson quickly endorsed Danny Burgess to succeed Lee, and that should lower Simpson’s blood pressure and make for a better working environment.

But there can only be one outright winner, and this week it’s easy.

The Biggest Winner: SpaceX. If there wasn’t a lump in your throat when the Falcon 9 rocket lifted off right on time Saturday from Launch Pad 39-A at Cape Canaveral, then you need to get out more. It was the start of a new era in space travel for the United States, and that’s beyond awesome. 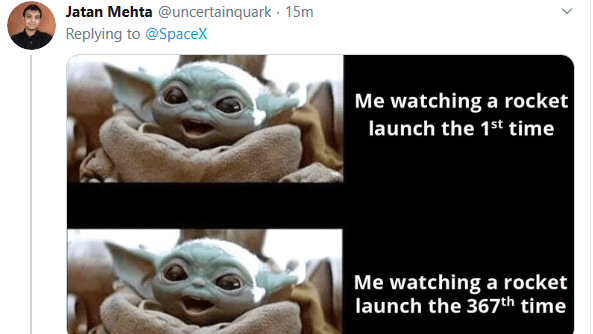 Astronauts  Doug Hurley and Bob Behnken became the first Americans launched into space from the U.S. since 2011. And, considering what’s going on in the country today, we needed this.

Oh man, did we need this. It opens up a universe of possibilities for future space exploration, and we need that too.

Dishonorable mention: Margaret Good. She’s back in the wrong part of this “winner-loser” thing for the second time in recent weeks. The Sarasota Democrat is trying to unseat Republican incumbent Vern Buchanan in Florida’s 16th Congressional District, but her campaign stepped in it when it retweeted a video that mentioned Good.

The problem is that it showed footage of Good over the Nikki Minaj track “Yikes.”

The lyrics include just about any racist remark you can think of, and even insults the memory of Rosa Parks.

What were they thinking?

The biggest loser: China. It’s game-on in the big chill between the U.S. and China, and Florida lawmakers are getting in their punches. It sounds like they’re just getting warmed up, too.

Scott opined on the Fox Business Network that “every citizen of Communist China by law has to spy on behalf of their country.”

He demanded that Florida divest itself of investments in China that help fund the state pension program.

U.S. Rep. Michael Waltz, a former Green Beret who represents Florida’s 6th District, co-signed a letter with Rubio that read in part, “Florida’s hardworking civil servants may not suspect that their publicly administered or managed retirement account invests in firms owned or controlled by the Government of China or the CCP (Chinese Communist Party).”