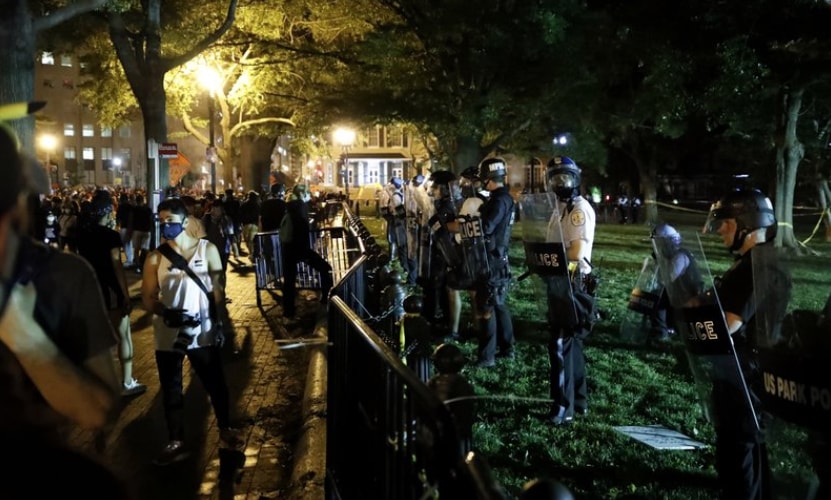 A Fox News reporter was pummeled and chased by protesters who had gathered outside the White House early Saturday adding to a growing number of journalists targeted by protesters, counter-protesters, and police in the nationwide unrest following the death of George Floyd.

For several journalists across the country, the demonstrations were taking an ominous, dangerous turn.

A television reporter in Columbia, S.C., was hurt by a thrown rock Saturday and a journalist in Minneapolis was shot in the thigh by a rubber bullet. A television news photographer in Pittsburgh said he was beaten by demonstrators, and police in Louisville, Kentucky, apologized after an officer fired what appeared to be pepper bullets at a television news crew.

Fox’s Leland Vittert was rattled following the Washington attack that he said was clearly targeted at his news organization.

“We took a good thumping,” he told The Associated Press. A live shot he was doing was interrupted by a group of protesters who shouted obscenities directed at Fox. Flanked by two security guards, he and photographer Christian Galdabini walked away from Washington’s Lafayette Park trailed by an angry group before riot police dispersed them.

Vittert said there were no markings on him or the crew’s equipment to identify them as from Fox. But he said during the demonstration, one man continually asked him who he worked for. He didn’t answer, but the man found a picture of Vittert on his cell phone and shouted to other protesters that he was from Fox.

“The protesters stopped protesting whatever it was they were protesting and turned on us,” he said, “and that was a very different feeling.”

He compared it to when he was chased away from a demonstration in Egypt during the Arab Spring of 2011 by a group that shouted, “Fox News hates Muslims.”

A correspondent from the website The Daily Caller followed Vittert and the demonstrators as they left the park. At one point, someone took Vittert’s microphone and threw it at his back. One woman chasing him wore a t-shirt that said, “I can’t breathe,” a reference what Floyd said earlier this week when a Minneapolis police officer pressed his knee against his neck.

Vittert said he was “extremely grateful” to the Daily Caller for documenting the scene; Galdabini’s camera was smashed. “They were putting themselves at risk,” he said.

“It makes me proud to do my job and to be a journalist,” he said. “I’m proud to be an organization that is unyielding in our coverage. We’re going to keep on telling our story and doing exactly what we’re doing.”

Suzanne Scott, CEO of Fox News Media, said in a memo on Saturday that Fox was taking all necessary security precautions to protect its journalists covering the story.

“We are truly living in unprecedented and transformative times and freedom of the press is a vital element to the foundation of our society,” Scott wrote.

On Friday, CNN correspondent Omar Jimenez and his two-person crew were arrested while covering overnight protests in Minneapolis. They were quickly released, and Minnesota Gov. Tim Walz apologized to CNN.

CNN’s headquarters in Atlanta was damaged later Friday by a group of protesters who also fought with police and set cars afire. While police tried to keep them away from the CNN Center, demonstrators broke windows there and scrawled obscene graffiti on the network’s logo.

Ian Smith, a photographer for KDKA-TV in Pittsburgh, said that he was attacked by protesters who stomped and kicked him at a demonstration there. Smith, who said other protesters jumped in to save him, posted a picture on Twitter showing him with a bruised face and bloody hand.

In Louisville, WAVE-TV was on the air covering a demonstration when video showed a police officer aiming a rifle at reporter Kaitlin Rust and her crew. She was heard yelling, “I’ve been shot! I’ve been shot!” and described them as pepper bullets.

Louisville Police spokeswoman Jesse Halladay apologized for the incident, and said police would review the video for potential discipline.

Two Associated Press photographers have been hit by projectiles while documenting protests, one in Minneapolis on Thursday and another in Los Angeles on Friday. Neither was seriously injured.

Demonstrators surrounded the police department headquarters in Columbia, S.C. on Saturday and a scuffle broke out with someone wearing a “Make America Great Again” hat. Rocks were thrown and Miranda Parnell, a television reporters from WIS-TV, was injured and taken to the hospital, according to a tweet from network anchor Judi Gatson.

It was not clear who threw the rock that hit Parnell.

In Minneapolis on Saturday, a Swedish journalist was shot in the thigh with a rubber bullet, apparently from a police gun, while covering a protest, according to the Norwegian newspaper VG. Later Saturday night, a CNN crew said some of its members were hit with rubber bullets.