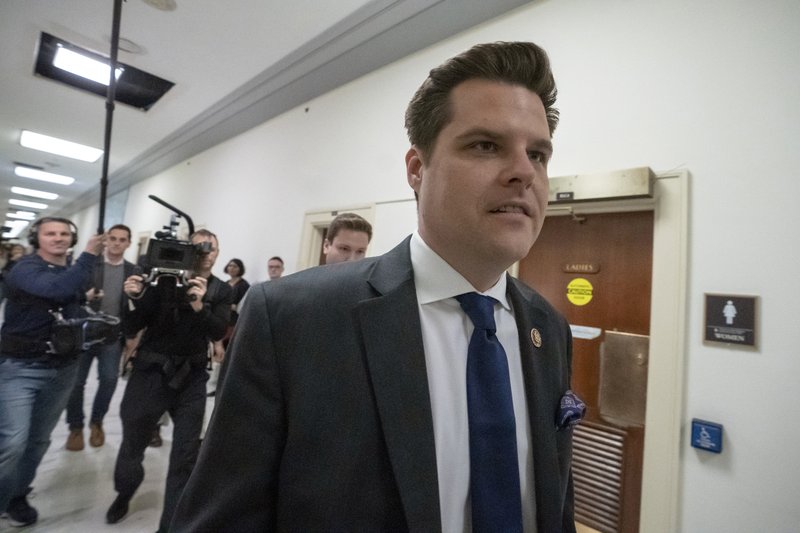 Gaetz challenged Twitter's status as a protected platform and criticized fellow Republicans for not putting Americans and small businesses first.

In a new episode of his daily podcast, U.S. Rep. Matt Gaetz tackled Twitter — and fellow Republicans — over the role they played in the nation’s COVID-19 response.

The Northwest Florida Congressman aimed the majority of his volleys at Twitter, accusing the social media platform of breaking its neutrality as a protected public forum by adding fact-checks to President Donald Trump‘s Tuesday tweets about mail-in ballots. On Friday, Gaetz filed a complaint with the Federal Election Commission over that unprecedented decision by the Silicon Valley giant.

“It’s about time the Federal Election Commission and the FCC (Federal Communications Commission) as well took action against these digital platforms that are trying to engage in election interference and that I think are violating existing law,” he said. “We do need to clean up the laws we have, but I’m always a fan of starting with enforcing existing law.”

Both Gaetz and Missouri Republican Sen. Josh Hawley have filed legislation that would strip social media platforms of their protections making them not liable for users’ posts. Such legislation, Trump’s executive order and Gaetz’s complaint would help reveal Twitter and other platforms as publishers rather than unbiased forums, Gaetz said.

“Twitter has taken upon itself to free ride on one of the President’s tweets as a campaigning activity,” according to the complaint. “The social media platform is overstepping boundaries and setting aside its privileged role as a mere ‘interactive computer service,’ and instead acting as a ‘shadow contributor’ to the Democratic National Committee.”

The Representative also accused an independent director hired by Twitter of having ties to the Chinese Communist Party, citing an article in The National Pulse. Fei-Fei Li was a former Google vice president and artificial intelligence expert before she was pushed out for controversial comments about Google’s partnership with the Pentagon on its drone program.

Twitter also hid a Friday morning tweet by Trump behind a warning saying it glorified violence, but the Representative did not address that tweet on his show. That tweet addressed riots in Minneapolis over the death of George Floyd, a black man who died in police custody.

In the episode’s second half, Gaetz addressed the country’s coronavirus response and started by calling out fellow Republicans for a letter they sent to Trump asking the President not to halt a nonagricultural visa program.

“It’s just not reflective of an America First policy when you’ve got tens of millions of Americans unemployed working to get re-on-boarded onto their jobs to be waving the flag of the America Last crowd that would bring in cheap foreign labor,” he said. “Just to be honest with you, that’s what big business wants a lot of time. They want cheap foreign labor, they want it now, and it doesn’t not inure to our country’s benefit.”

And with concerns about COVID-19 reseeding from Latin America, Gaetz said he would need to see more testing and participation from businesses before backing the H-2B visa program, particularly as meatpacking plants remain some of the country’s hot spots. Trump has been “prophetic” about the impact of travel on the pandemic, the Representative added.

“Latin America’s sort of becoming the new Europe in this virus, and I am not optimistic that some of the tools that were used in Europe are going to be as effective in Latin America,” he said.

And Gaetz explained why he voted with the majority on a bill to make information about beneficiaries of the Paycheck Protection Program public. The 147 no votes against the TRUTH Act, all by Republicans, denied supporters the two-thirds majority needed to pass the bill.

“I know businesses in my district and districts all over this great country where companies did not see one diminution in revenue,” he explained. “Some even saw increases in revenue as a consequence of the changes in our life from coronavirus. But because they deemed themselves eligible, they would go and apply for this program.”

He lauded Treasury Secretary Steven Mnuchin for creating a limited amnesty period for businesses to return funds they didn’t need.

“But in the event that didn’t happen, there needs to be enforcement, and the way to guide that enforcement is transparency, and I think the best disinfectant is always a little bit of sunshine,” Gaetz said.