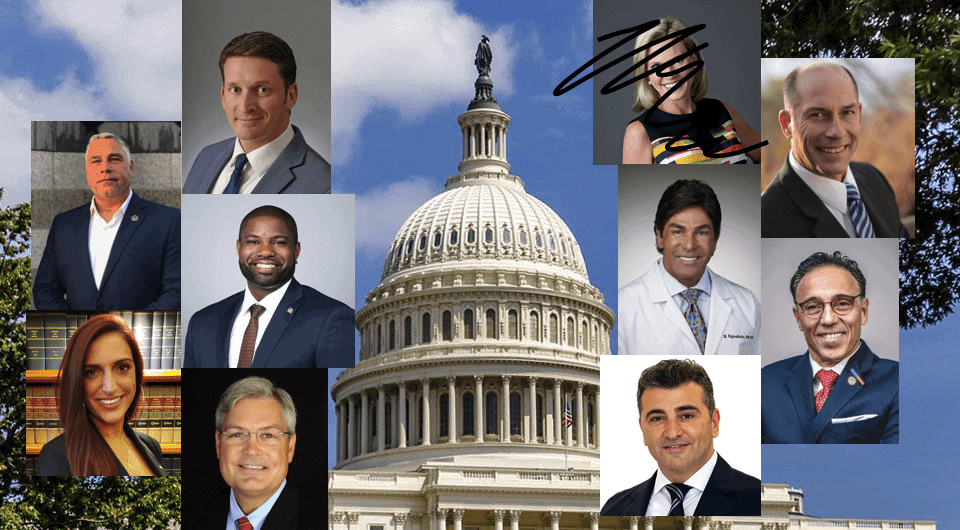 Experts say her departure may be good for other Lee County candidates.

The crowded field of Republicans running for Congress in Southwest Florida winnowed by one on Friday.

State Rep. Heather Fitzenhagen withdrew her federal candidacy and filed instead for state Senate. But what does that mean for the remaining nine Republicans campaigning in Florida’s 19th Congressional District?

Observers and campaign insiders say her departure may have significant impact, but then few believe Fitzenhagen would have left the race if she saw a reliable path to Washington. Republican candidates Casey Askar, William Figlesthaler, Dane Eagle, Byron Donalds and Randy Henderson all outraised and outspent her in the race.

That said, opponents praised Fitzenhagen on the way out of the door and quickly started to explore how to consolidate her support into their own.

“Anytime someone exits the race in a 10-way primary it’s going to help other candidates,” said a campaign spokesman for Henderson’s campaign.

“We wish her the best of luck in the Republican primary for Senate District 27.”

A number of sources suggested Henderson, the Mayor of Fort Myers, may enjoy the greatest benefit from the change in roster.

Peter Begerson, a political science professor at Florida Gulf Coast University, noted the Congressional district spreads over communities in Lee and Collier counties, with Lee boasting the most voters. Fitzenhagen served eight years in the Florida House representing voters in the Fort Myers area, drawing frequently from the same base of voters as Henderson.

But he also saw Eagle, who served with Fitzenhagen over the same eight year span but in neighboring Cape Coral, also earning a boost.

Bergerson said for the moment, he sees two prominent figures from Lee with Eagle and Henderson splitting the vote there, while Rep. Donalds and Naples physician Figlesthaler boast name recognition in Collier.

“But at this stage it’s a toss-up, and I think it comes down to organizational effort of all four candidates,” Bergerson said.

The Donalds team made clear they don’t intend to limit outreach to the Naples area, though.

“We’re going to pick up votes from Republicans across the district who are looking for the proven conservative fighter who will support the President,” said Shawn Frost, a spokesman for Donalds.

Multiple campaigns suggested internal data shows Askar, a Naples businessman blasting the airwaves with advertising, quickly established himself as a top-tier candidate, if not the leader of the race.

“We are focused on our race, feel comfortable where we are no matter who’s in or not,” said Nick Carr, a political consultant for Askar’s campaign.

Askar also hails from Collier. So if geographic proves to be the deciding factor, seeing Lee candidates gain a boost.

Of course, it won’t just be top-tier candidates wrestling for those votes.

Less well-funded candidates like Dan Severson, Darren Aquino and Dan Kowal surely will count on a smaller field giving a greater opportunity to break out.

Most notably, Ave Maria University grad Christy McLaughlin now holds distinction as the only woman running for the Republican nomination.

“In one sense it’s a bit of a bummer because I loved having a packed race and giving voters more opportunity to choose from,” McLaughlin said. “That said, I’m happy to be the only woman running in the race. It’s about expanding the party, and as a 24-year-old Latina woman, I hope to inspire more young people to get involved.”

She also notes Fitzenhagen’s exit leaves her as the only attorney in the race. But asked if this could boost fundraising, McLaughlin demurred. She stopped accepting outside dollars at the beginning of the COVID-19 pandemic, and swore off PAC donations from the launch of her campaign.

Those campaigns with greater resources have in some cases made a direct play for Fitzenhagen supporters seeking a new home. Figlesthaler’s campaign released a video reel celebrating the lawmaker’s career in the House and thanking her for her service, rapid praise that left many wondering if endorsement conversations wer had in advance. Fitzenhagen has made no such announcement so far.

“I sincerely admire Rep. Fitzenhagen and her hard work championing clean water initiatives,” Figlesthaler said in a statement to Florida Politics. “With her departure from the race, I’m simply the only choice for voters who are looking for someone who won’t be bought out by special interests and who understand that clean water is the both the lifeblood of our community and the backbone of our economy.”

And the Askar team also went out of their way to praise Fitzenhagen. Carr with the Askar campaign called the former opponent a “great civil servant for Southwest Florida.”

Few seemed interested in alienating Fitzenhagen, who as a Senate candidate will still share the primary ballot in a large portion of the Congressional district.

And there’s still two months for further developments to shake up the race more. For now, nine different candidates plow ahead toward an Aug. 18 primary that remains one of the hottest elections in Florida this cycle.

nextReopening has begun. Which Florida communities still have lockdown orders in place?