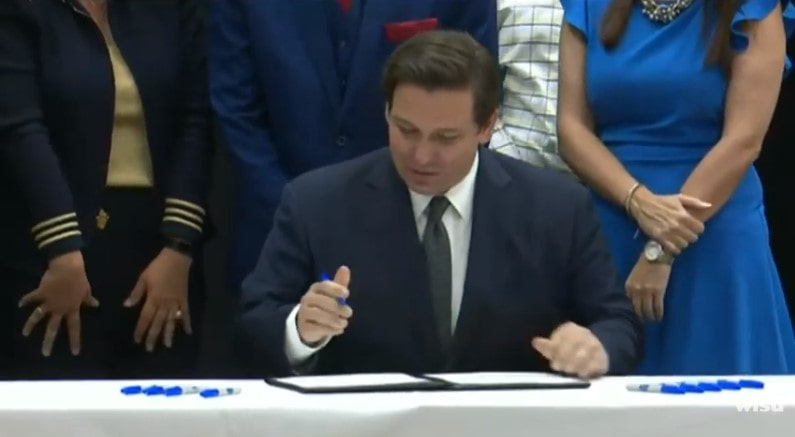 The law expands the program by tens of thousands of students.

Florida will build off improvements made to the Family Empowerment Scholarship Program with legislation signed by Gov. Ron DeSantis Thursday allowing more families to apply for vouchers.

The measure (HB 7067) raises income caps on the voucher program and expands the maximum number of vouchers available.

For the Family Empowerment Scholarship (FES), households making up to 300% of the federal poverty level will be able to apply. Currently, that cap is 185%.

“What we found was there was a lot of support, a lot of interest in utilizing that, so we knew that we needed to make sure that we weren’t going to let wait lists build up again in the future,” DeSantis said.

If there’s still money left and more than 5% of scholarships are available, students whose families earn up to 325% of the federal poverty level would be eligible. The maximum number of students allowed to participate in the scholarship program, started last year, would also increase annually by 1% of the state’s total public school student enrollment, up from the 0.25% currently allowed.

“We wanted to be able to empower parents — many of them are low-income parents, many of them are single mothers, working mothers — to have a meaningful choice and to get their child in the best environment,” DeSantis said of the original plan.

The new legislation, which kicks in Wednesday, is the latest chapter in the battle over school choice in Florida. Debate about the bill during the Legislative Session reflected deep divisions that have surrounded vouchers since former Gov. Jeb Bush and Republican lawmakers began a major school-choice push after Bush took office in 1999.

While the bill makes a series of changes, the key provision expands FES by an estimated 28,902 students.

Unlike most legislation the Governor has signed this spring and summer, this one was not an uncontested battle. The House approved the bill 81-39 in March, and after a failed amendment, the Senate followed suit later that week with a 21-14 vote.

“We’ve worked really hard this year to be able to deliver for students and families when it comes to education in the state of Florida, and it was a tough fight on a lot of this stuff,” DeSantis said.

Scott Morreale, president of Cristo Rey Tampa — the college preparatory school that hosted the signing ceremony — thanked the Governor for his dedication to education and school choice.

“The FES had a very successful first year with every one of the 17,000 scholarships being utilized,” Morreale said. “With his leadership, the Governor came right back and made the expansion of the program a priority again this year.”