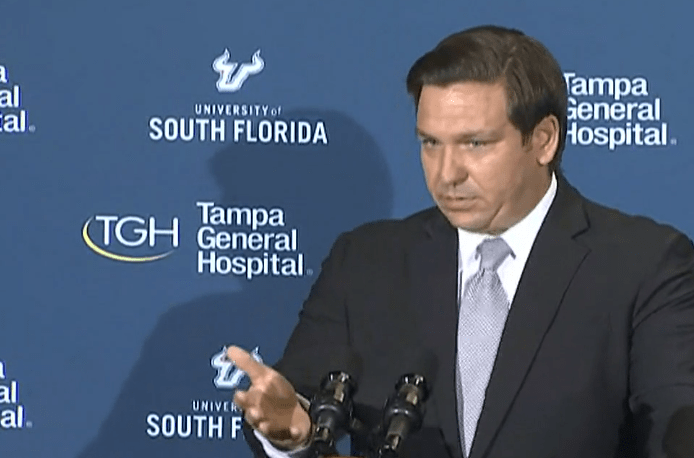 Florida saw more than 10,000 newly documented positive tests for COVID-19 in numbers released Thursday, and the Governor believes media and protesters are to blame.

“The Media was trying to say the numbers were phony,” Gov. Ron DeSantis said Thursday of earlier points in the state’s coronavirus crisis.

“Now they like the numbers because it’s higher,” DeSantis jabbed. “Funny how that works.”

Indeed, the numbers are soaring, with positive tests in terms of daily raw numbers and a percentage of the total higher than ever before.

The Governor revisited a line of argument, honed in recent media conferences, that the media’s failure to cover the state’s struggles with the novel coronavirus led hapless Floridians to forget about the pandemic.

Protests, he said, “took coronavirus off the front pages.”

“Really, for two weeks, you didn’t see much about it,” said the politician-turned-media-critic.

He said, without evidence, that “some of the demonstrations may have played a role in Tampa or Miami.”

In June, the Governor made a similar claim.

He said that perhaps the “social distancing took a back seat to social justice,” but noted then he had nothing to back it up. This time, he didn’t bother with the caveat.

For DeSantis, appearing with Vice President Mike Pence for the first time since a press conference when DeSantis said the state had defied doomsaying about the virus’ ultimate effects, these deflections continue a theme.

DeSantis told a reporter “you’ve got a lot of people in your profession who waxed poetically for weeks and weeks about how Florida was going to be just like New York. “Wait two weeks, Florida is going to be next. Just like Italy, wait two weeks.’ Well hell, we’re eight weeks away from that and it hasn’t happened!”

Some will say those comments didn’t age well.