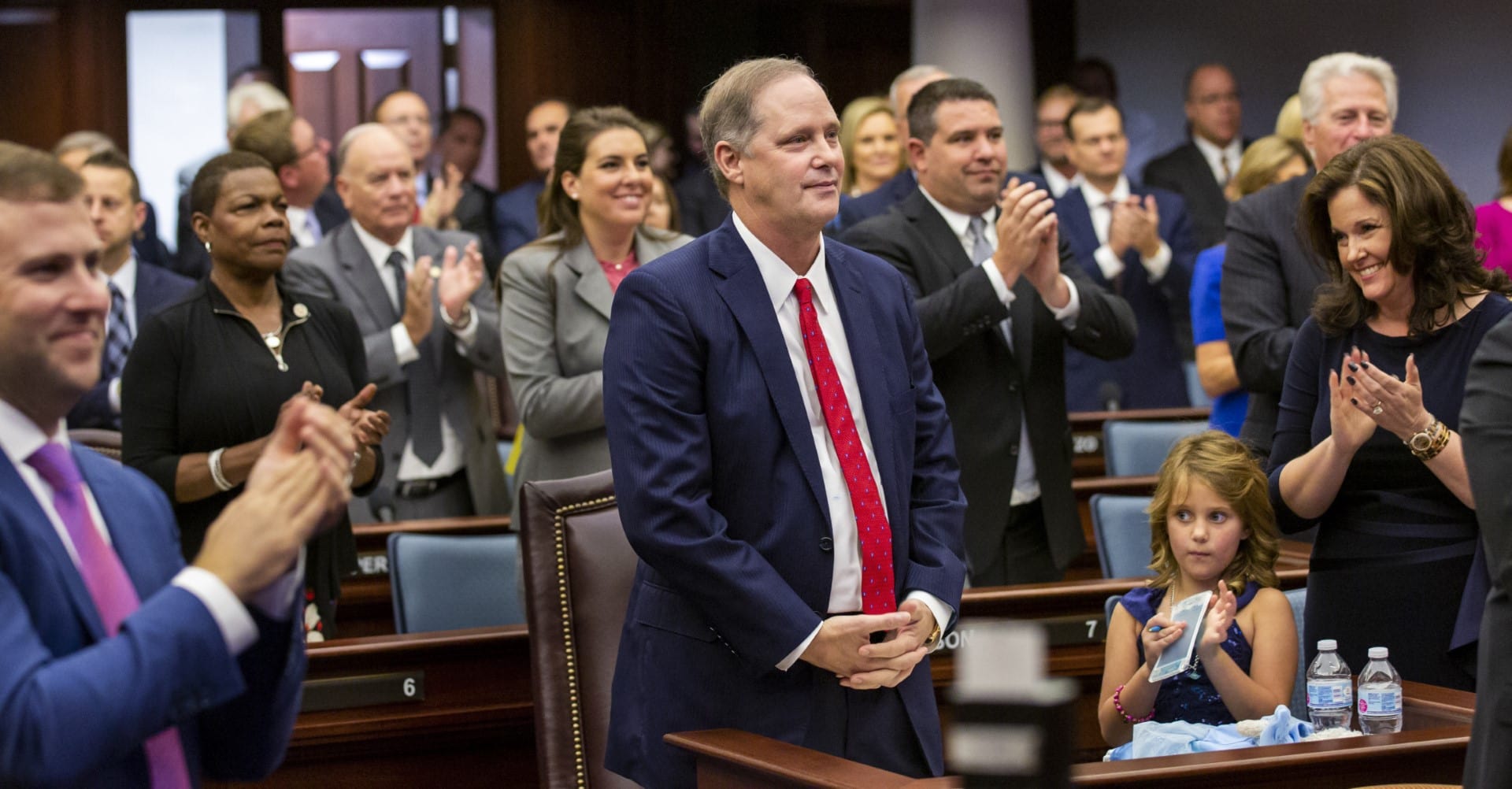 TALLAHASSEE, FLA. 10/15/19-Sen. Wilton Simpson, R-Trilby, center, basks in applause as he is designated to become the Senate President starting in Nov. of 2020 through 2022. COLIN HACKLEY PHOTO

Face masks, temperature checks and alternating committee weeks are among the options state leaders are pondering as they prepare for the 2021 legislative session and meetings that kick off in November.

While the numbers of COVID-19 cases in Florida continue to soar this summer, the future of the pandemic remains unknown.

The uncertainty is forcing incoming Senate President Wilton Simpson, who has decades of professional experience in environmental cleanup, to consider a panoply of mitigation measures to protect visitors, lawmakers and staff members entering the Capitol.

“We’re going to use science to determine ingress and egress from that building. Politics is going to have nothing to do with it, in my book,” Simpson, a Trilby Republican slated to take over as Senate president following the Nov. 3 elections, told The News Service of Florida on Thursday.

The Capitol has been closed to the public since March, when widespread shutdowns aimed at stemming the spread of the novel coronavirus began. Legislative staff members and executive-branch aides have had access to the building, and reporters have been allowed inside to cover Gov. Ron DeSantis’ press briefings.

The Florida Commission on Ethics this month will hold an in-person meeting in the Senate Office Building. The protocols laid out for the July 24 meeting could provide a glimpse of what Capitol denizens might encounter later.

Face coverings will not be mandated but will be available at the ethics commission meeting. Attendees will be asked to sit at least two seats apart from each other. Empty rows will be used to create space between attendees. The meeting is on the first floor of the Senate Office Building, so the use of elevators will not be necessary. The podium will have hand-sanitizing wipes available for use between speakers.

While the meeting room has a capacity of 110 people, attendance will be limited to half that number, according to the plan distributed by the commission on Thursday.

The commission usually meets at the 1st District Court of Appeal in Tallahassee, but decided to hold July’s session in the Senate building because “we can’t properly social distance” at the appeals court, commission spokeswoman Kerrie Stillman said in an interview Thursday.

“Rows will be roped off. People have to sit with three empty chairs between them. There will be sanitizing stuff. All that kind of good stuff to keep people safe,” she said.

The 2021 legislative session will start March 2, but lawmakers will return to the Capitol in November for an organization session after the general election. The House and Senate then are expected to hold a series of weeks of committee meetings leading up the session’s start.

Simpson said he’s relying on his experience with asbestos and mold removal as he considers respiratory protective measures to avert the spread of the highly contagious coronavirus, which causes the respiratory disease known as COVID-19.

The virus is spread through close contact between people and through respiratory droplets produced when infected people cough or sneeze, according to the federal Centers for Disease Control and Prevention.

“My brain immediately always thinks of being risk-averse and safety,” he said. “I have a background in this, and we’re going to do things as best as humans can do to keep everybody in that building safe.”

But incoming House Speaker Chris Sprowls, a Palm Harbor Republican who will become speaker in November, said in a text message Thursday that it is “a little premature right now to discuss plans, and obviously it is not just the decision of the House to decide how to address the health and safety of employees and visitors to the Florida House and the state Capitol.”

Because President Donald Trump shuns their use, face masks — recommended by health officials worldwide — have become a political flashpoint. Trump’s supporters have rebuked state and local officials’ mandates requiring the use of face coverings.

In Leon County, where the Capitol is located, the head of the local Republican Party has filed a lawsuit against a face-mask mandate approved by county commissioners. State Rep. Anthony Sabatini, a Howey-in-the-Hills Republican who is a lawyer, is representing local GOP Chairman Evan Power in the lawsuit.

But Simpson said visitors to the Capitol might be required to wear face coverings if the COVID-19 situation has not improved.

With so much uncertainty about the pandemic’s future, “we’re going to try to create a protocol that has some flexibility,” Simpson said, adding that a coronavirus vaccine could be available by November.

“That would be the best thing that could happen,” he said.

Simpson said he is considering requiring face masks, performing temperature checks when people enter buildings, blocking off seating in committee rooms and alternating committee weeks with the Florida House. The two chambers typically hold meetings in Tallahassee during the same weeks leading up to the legislative session.

“Under current conditions today, I’m not sure why we wouldn’t have all of the above requirements,” he said.

The situation with the pandemic is evolving, noted Simpson, who said he wears a face mask when he leaves home and checks his temperature several times daily. For example, instant COVID-19 tests might be available later this year, he said.

In the meantime, “we are taking this very seriously,” he said.

“We have to prepare for a major potential wave in November. And even though we would have better therapy and medicines, and even though science will be in a much better place four months from now, you still have to be prepared for having to be isolated and having to be protective,” Simpson said.

Leaders have to prepare for “what would be the worst-case scenario, which will mean the most safety protocols in place,” while also considering that protocols could change as medicines become available and technology develops, he said.

“We have to be prepared for all of those,” Simpson added. “If we prepare for it, then we’ll be able to manage that system, if it were to come about.”