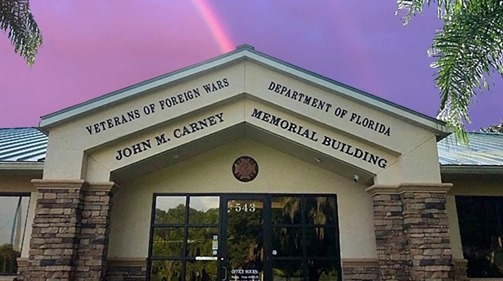 Image via Department of Florida VFW

Among the bars and social clubs shuttered during the pandemic, Florida closed down American Legion and VFW locations statewide.

In what’s still the most significant step back from a phased reopening, the Department of Business and Professional Regulation on June 26 suspended on-premises alcohol consumption at Florida bars.

An amended order issued on July 1 makes clear that it doesn’t just shut down late-night bars popular with college kids. It also impacts veteran-friendly drinking holes around the state, the kind where officials often visit to issue awards for active and retired soldiers living in the state.

The Department of Florida VFW, a nonprofit organization, shared the explanation on its Facebook page last week. The opinion drew an expected level of pushback.

“All of the veterans fought at one time or another for our freedom, yet our state is taking that away from them,” wrote Sandy Kveton, of Sebastian. “It’s a person[al] Choice to enter a VFW or an American Legion when they are open … well, it should be anyway.”

Officials at the agency stress the order only applies to the special licenses for VFW and American Legion locations to sell alcohol on premises. If an organization has a separate license for selling food, that’s still good so long as no one is pairing dishes with drinks.

Department of Business and Professional Regulation Secretary Halsey Beshears wrote on Twitter about the amended order, saying he didn’t want confusion over the state’s direction. The amendment sought “to remove any ambiguity for bar & restaurant owners as well as local law enforcement as to what is temporarily to remain closed.”

Establishments can also serve up sealed drinks to go, even bars that don’t sell food. They just can’t serve up drinks on site.

Notably, the often older clientele toasting at VFWs faces higher risk from the COVID-19 pandemic than young demographics typically. While those aged 65 and older comprise roughly 14% of all COVID-19 cases in Florida, that demographic makes up 83% of deaths of individuals with the disease.

The state started cracking down on drinking establishments shortly after a new surge in COVID-19 cases began within the state of Florida. Health officials since then sounded alarms that South Florida had become the latest epicenter for the pandemic in the U.S.