It was a good week for the people of Duval County. But, what was Ted Yoho thinking?

We start this week with some good news – Major League Baseball is back!

Also, the National Hockey League and National Basketball Association are scheduled to re-start their seasons this week. If that’s not enough, National Football League owners and players agreed on financial parameters and other issues to start their season on Sept. 10 as planned.

Even better, owners agreed to scrap the dreaded preseason games in the interest of player safety.

Sports leagues like to say they help heal the nation in times of stress. Often, that’s just the act of patting your own back, but it feels different this time. Sports are a piece of normal for many people.

No, a family mourning the loss of a loved one to COVID-19 won’t care that Tom Brady will suit up for the Tampa Bay Buccaneers. The same goes for someone in desperate financial straits because their employer went out of business.

But, the resumption of ballgames is a tangible sign that things will get better. This is the first shoots of grass appearing on a devastated landscape.

Now, on with our weekly game of Winners and Losers in Florida politics.

Piccolo is wise in the ways of Tallahassee. He served as chief spokesperson for the last two House Speakers – Richard Corcoran and Jose Oliva. He’s not afraid to mix it up with reporters he believes missed the mark, but he also will engage in back-and-forth with people who hold differing views. 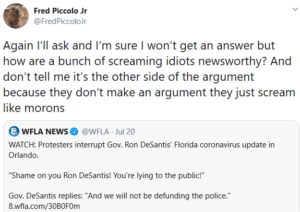 It’s probably no coincidence that Piccolo’s arrival coincided with a change of tone by DeSantis on school re-openings. The Governor sounded willing to bend a little after demanding that schools fully reopen.

“If a school district needs to delay the school year for a few weeks so that everything will be in good shape, have at it,” DeSantis said. “The important thing is that our parents have a meaningful choice when it comes to in-person education.”

The almost (but not quite) biggest winner: Decency. The U.S. House voted overwhelmingly to remove Confederate statues from the Capitol. Not surprisingly, Democrats, of course, supported the measure brought by Speaker Nancy Pelosi.

Most of the Republicans, of course, opposed the idea.

Alas, the exercise may be largely symbolic.

The Senate still has its say, and then President Donald Trump would have to sign the bill. Want to take bets on that?

The biggest winner: The people of Duval County. By a large margin, residents there opposed the idea of the Republican National Convention coming to Jacksonville.

A poll by the University of North Florida’s Public Opinion Research Laboratory showed 58 percent thought that was a bad idea.

Now, they don’t have to worry about that.

Trump canceled the show, where he planned to deliver his acceptance speech, over concerns about COVID-19.

Local businesses looking for an infusion of convention-related cash lost out, but Mayor Lenny Curry said canceling the event is the right call.

The Jacksonville Host Committee agreed, saying it the “absolute right decision for the health and safety of the people of Jacksonville and of the entire state of Florida.”

But now, as someone once said, we move to the rest of the story.

First, he joined a group of fellow House finger-pointers in a confrontation with House Republican Conference Chair Liz Cheney.

Support of Dr. Anthony Fauci. Gaetz and the gang said that showed disloyalty to Trump.

Gaetz, the website said, “privately engaged in several spending practices during his nearly four years in office that appear to be in conflict with the House’s ethics rules.”

Politico detailed Gaetz’s possible misuse of taxpayer dollars on a speech-writing consultant and construction of a TV studio at his father’s home in Niceville.

Gaetz has denied any wrongdoing.

The almost (but not quite) biggest loser: Trump. The part-time Florida man consistently lags behind Democratic challenger Joe Biden in polls. Even so, it was an eyebrow-raiser when the latest Quinnipiac poll put Trump behind 51-38 percent in Florida.

For what it’s worth, a Q-poll at this point in 2016 had Trump leading Hillary Clinton by 3 points in Florida.

Trump’s troubles in our state are linked to COVID-19, school re-openings, and masks. Voters give him a 50-47 edge over Biden on the economy, but they’re on the opposite of him and DeSantis on those other issues.

But there can only be one biggest loser, and this week that choice was a no-brainer.

The biggest loser: Ted Yoho. Consider how hard it is to make Matt Gaetz look like Ghandi. But Yoho, who represents Florida’s CD 3, did just that after engaging in a shouting match with Democrat Alexandria Ocasio-Cortez on the steps of the U.S. Capitol.

“Out of nowhere, Yoho comes up to me and puts his finger in my face and flies off in a rage. He started going off about shootings and bread and nonsense, calling me crazy, shameful, out of my mind, etc.,” AOC told Yahoo News.

“At first, I tried to talk to him, but that just made him yell over me more.”

A reporter from The Hill overheard the confrontation and said Yoho called her a “f—ing bitch.” Yoho has denied that.

Yoho later offered a ham-handed apology-ish on the House floor.

“I rise to apologize for the abrupt manner of the conversation I had with my colleague from New York,” he said.

But then he veered off the rails. He talked about his experience with poverty and noted that he and his wife at one point used food stamps.

OK, but what does that have to do with behaving like a mouth-breathing knuckle-dragger?

“I cannot apologize for my actions or for loving my God, my family, and my country,” Yoho said.

Does loving God include verbally assaulting and denigrating a woman because you disagree with her politically?

“Mr. Yoho mentioned that he has a wife and two daughters,” AOC said on the House floor in response to Yoho.

“I am two years younger than Mr. Yoho’s youngest daughter. I am someone’s daughter too. My father, thankfully, is not alive to see how Mr. Yoho treated his daughter.”

Yoho is not running for re-election.