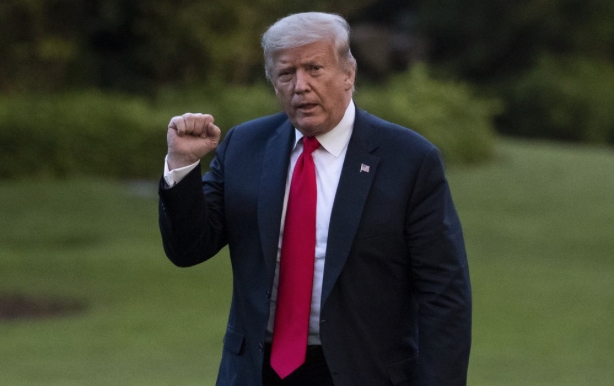 All eyes are on Florida ahead of November.

Today marks 100 days until the General Election on November 3, and it could not be a more important election.

And the candidate is President Donald Trump.

In 2016, Trump made promises to Floridians and after three and a half years in office, he has delivered on those promises. From repealing and replacing an outdated tax code to renegotiating fairer trade deals, to leading us through an unprecedented pandemic, and leading the Great American Comeback, Trump has proved to be the leader America needs.

Trump worked with Republican leaders in Congress to reform our outdated tax code, which resulted in over 82% of middle-income Americans taking home more money in their paychecks. It is estimated that over 12,600 jobs were created in the Sunshine State and that Floridians received an average tax cut of $1,345. Meanwhile, Joe Biden has vowed that the “first thing” he will do in office is to repeal the Tax Cuts and Jobs Act and raise taxes on Floridians. Reverting to the old tax code would cost taxpayers over $3.8 trillion over the next decade.

Earlier this month, Trump’s United States-Mexico-Canada Agreement (USMCA) went into effect, providing a much-needed boost across all industries in Florida, which need relief now more than ever. The USMCA replaced the disastrous NAFTA trade deal that Biden proudly supported, which resulted in 15,000 American jobs lost every year. Thanks to Trump, the USMCA will support over 27,000 agricultural jobs in the Sunshine State.

While Trump has led Floridians through this once-in-a-lifetime pandemic, Biden continues to be a day late and a dollar short. Trump has led a bold, whole-of-government approach to fighting the pandemic, from banning travel from China and Europe at the onset of the virus, to providing lifesaving resources to states like Florida. In order to keep our economy afloat, the Trump administration worked aggressively with Republicans in Congress to negotiate the Paycheck Protection Program — with over 393,000 loans totaling over $32 billion being sent to Floridian small businesses.

Before the coronavirus pandemic hit the United States, Floridians were experiencing record-low unemployment and booming job growth thanks to the Trump economy. While Biden continues to hide in his basement, Trump has been leading our Great American Comeback. In June, we received another uplifting jobs report, where Americans saw over 4.8 million jobs added — smashing all expectations. Trump wants to safely rebuild our economy and reopen our schools, while Joe Biden sees the pandemic as a political opportunity and has sided with unions to keep schools closed.

In addition to Trump’s “Promises Made, Promises Kept” agenda, the Trump campaign and RNC have been investing in Florida since last cycle. Having never left the state in 2016, Florida Trump Victory, the joint operation between the Trump campaign, RNC, and the Republican Party of Florida, has over 180 staffers in all 67 counties of the Sunshine State. We have been building the largest data-driven ground game operation in the history of politics.

Our team is battle-tested, having hit our 10 millionth voter contact in the state. We are ready to help Republicans win up and down the ticket in November.

Meanwhile, Biden’s campaign has just found Florida on a map. Our thousands of volunteers on the ground are extremely enthusiastic for Trump, and no amount of hires at the eleventh hour from Democrats can deliver the White House for Biden.

All eyes are on Florida ahead of November, and we are confident that with Trump’s “Promises Made, Promises Kept” agenda, coupled with our unrivaled ground game, Florida can yet again deliver its 29 electoral votes for Trump and elect Republicans up and down the ticket in November.

Joe Gruters is chair of the Republican Party of Florida.