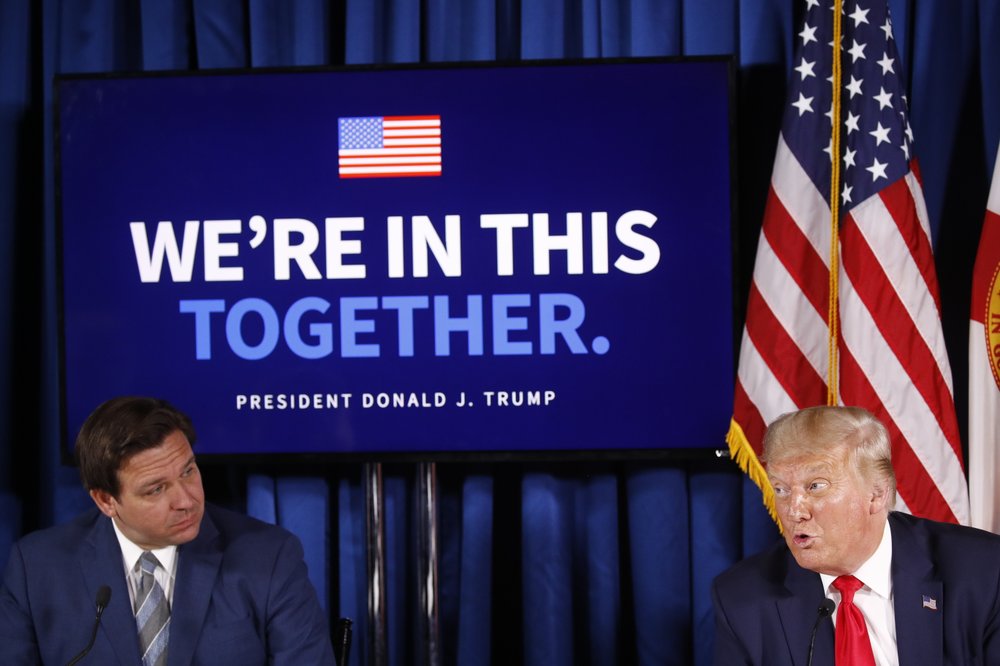 For a roundtable on Hurricane Isaias and COVID-19 preparedness, President Donald Trump wasn’t prepared with all the facts Friday.

In a campaign stop in Tampa earlier in the afternoon, he was unaware of Isaias’ status.

“I don’t know if it’s going to be a hurricane or not,” Trump said.

The storm strengthened into a hurricane overnight, hours before Trump’s visit.

The President wasn’t fully read on the storm by the time he arrived in Belleair for the storm preparedness and COVID-19 roundtable.

“The hurricane is … I’m not sure it’s a hurricane yet. It’s right now, it’s sort of projected as a storm slash hurricane, right? Is that looking like a hurricane to you?”

This time, Gov. Ron DeSantis was there to bail him out.

“I think that it did reach Category 1 status, but it’s kind of right at the border,” he said.

“Let’s keep it there,” Trump interrupted. “Let’s not let it get any bigger.”

Earlier Friday, the Governor declared a state of emergency and warned Floridians that the storm could strengthen to a Category 2 storm. But if the storm strengthened, he added that it would peel farther from the coastline.

Nevertheless, Trump and the Governor both warned the storm could bring lots of water and outages along the Florida coast before it works its way northward.

“My administration will be here for you every single step of the way. We’ve done everything we can do, and now we’re just waiting for the storm,” Trump said before joking that the storm was following him to Florida.

The President  has already approved emergency declarations for Puerto Rico and the U.S. Virgin Islands.

Trump also praised DeSantis for a “fantastic job” on the virus and noted Sen. Rick Scott‘s commitment to the state even after ending his term as Governor. Sen. Marco Rubio, who did not attend, received a nod as well.

But while the President patted DeSantis on the back, the state is seeing just shy of 10,000 new COVID-19 diagnoses per day and four consecutive days of record-breaking death tolls.

“We remain concerned about Florida, about Miami and a certain area of Miami in particular, but local officials are working hard and we think we have that one in the right step also,” Trump said.

He noted that the state has plenty of hospital beds and ICU capacity. DeSantis and health officials have tried to direct conversation away from capacity, insisting hospital systems have the ability to shuffle patients and add ICU beds as necessary.

But the President also noted the importance of personal responsibility to social distance, protect the elderly and wear masks.

“The single best way to defeat the disease is personal responsibility,” he said. “The fact is you have to do the social distancing thing.”

An hour prior, the law enforcement officers and donors who came to watch Trump speak on the tarmac in Tampa were largely seen not wearing masks.

Asked about the record-breaking number of deaths in Florida, Trump acknowledged the mortality, but said the state was doing relatively well.

“I hate it anywhere, but if you look at other countries, other countries are doing terribly. This is a horrible disease. This is a disease that should’ve never happened,” he said before attacking China for letting the virus out of the country.

And he highlighted that Florida is helping countries like France, Italy, Mexico and Russia with ventilators that the country is producing by the thousand per month while claiming that every American who needed a ventilator received one.

“We started off with essentially very little, and we’ve become a ventilator manufacturer, so to speak, and we’re helping a lot of countries.”