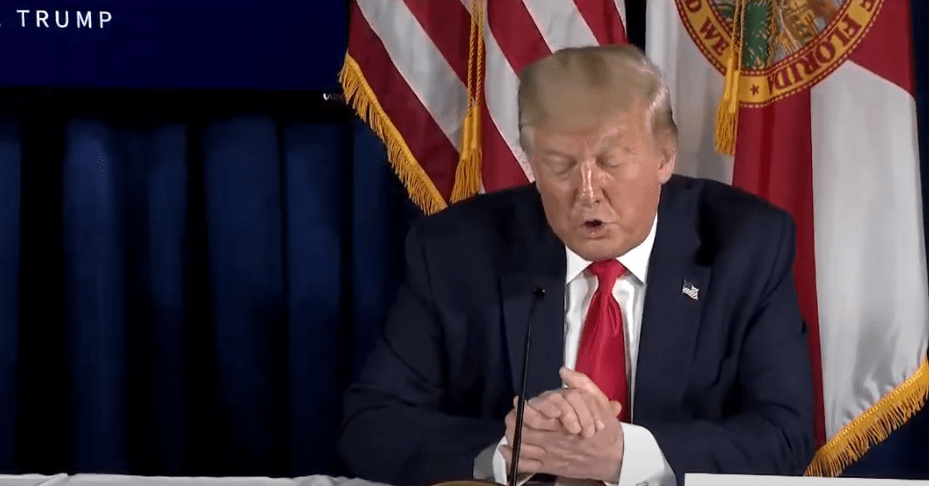 As the 2020 Presidential race heats up, two potential 2024 candidates had to work together Friday in spite of themselves.

Sen. Rick Scott, the former Governor of the state, got to make the trip on Air Force One with President Donald Trump. He was notable exiting the plane because he was wearing a mask. He did not stand behind the President as he made a pro-police speech, leaving that privilege to sheriffs backing the President.

In any event, Scott wouldn’t get the President to himself. At a roundtable Friday afternoon, he had to share focus with his successor in the Governor’s Mansion.

The dynamic between Gov. Ron DeSantis and Scott has been fraught with difficulty since even before the inauguration. If there is any semblance of a functional working relationship between the two, it’s not advertised.

The sniping between the two has been a matter of record. DeSantis, without mentioning Scott by name, has bemoaned the “jalopy” of an unemployment system he inherited. Scott, without mentioning DeSantis’ name, has blasted Florida for messaging the virus crisis badly and for not being accountable regarding how federal coronavirus relief funds have been spent.

The two have made other moves to one up each other, correctly surmising that there’s one ticket out of Florida for 2024. DeSantis has made no secret of bigger aspirations, while Scott is angling to chair the National Republican Senatorial Committee in 2022, giving him a national platform beyond just cable news hits.

While both aspire to be the lead dog, for the President, they are part of the pack. And the Tampa swing showed it.

The President kicked off the event discussing the incoming hurricane, saying DeSantis, who was sitting beside him at the event, is “doing a great job … a fantastic job.”

Scott, who was not directly next to the President, is “representing the state of Florida very well,” Trump said, putting the Senator in the middle of the pack of those introduced.

Trump did not mention the lack of coordination between the two top Republicans, but kept making asides to DeSantis, not Scott, as he recited various things the White House has done to help with virus response.

DeSantis offered remarks after the President wrapped, recapping hurricane advisory language as Trump looked on like he was being briefed for the first time. In previous years, of course, that would have been Scott’s role. But no more.

Scott was able to talk about how Trump had helped in previous storms, before briefing the President on Puerto Rico and lauding Trump for his commitment to vaccines and testing.

“The Governor’s seeing some issues that I’m sure other states are having,” Scott remarked, again making his position clear without violating Ronald Reagan‘s 11th commandment.

But it was DeSantis who had the more relaxed dynamic with the President, recounting the high points of the state’s response to coronavirus, with a focus on long term care facilities.

The Governor started to run the meeting, stacked with familiar players like Senate President Wilton Simpson and Justin Senior of the Safety Net Hospital Alliance, and their testimony made DeSantis look good.

“The key is to keep working together,” Senior said.

He was a supporting player, while the Governor got on the marquee. And sometime during remarks extolling the maskless Governor, he put his covering back on.

While the President, during Q&A, referred to “Ron and Rick,” ultimately only one got the spotlight.

The banter between DeSantis and Trump extended to reporter questions about prescription drug importation legislation passed on the state level and greenlighted by the White House. The Governor even joked about ads he saw with his children while watching Paw Patrol.

“They said Florida’s gonna be bringing in drugs from Djibouti that’s gonna kill everybody,” the Governor quipped, as he and the President went on to discuss the size and strength of the pharmaceutical lobby.