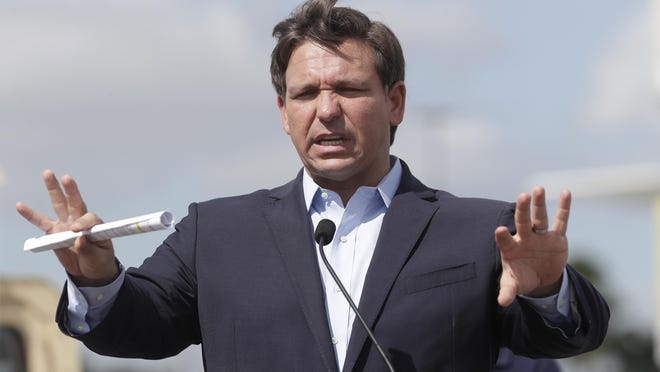 That's a reversal, but the Governor knows it.

After months of pointing to the testing positivity rate as the best tool to track COVID-19 spread, Gov. Ron DeSantis now says emergency department visits for symptoms related to COVID-19 are the best way to track the virus’ spread.

The Governor acknowledged the change when asked about a recommendation by the American Academy of Pediatrics that schools not reopen until there is a 5% positivity rate. Florida’s positivity rate is currently above 10%.

But in recent weeks, some labs or hospitals have reported testing batches with 100% positive results, indicating the labs are not reporting negative results. That has raised questions about the state’s positivity rate, including from DeSantis, who said to use the positivity rate, “you kinda gotta get all the negatives there as well.”

By Tuesday, he seemed committed to the change of course, questioning labs’ commitments to reporting all results in a timely manner.

“I’d be very cautious of tying a child’s future to the efficacy of some private lab dumping the results into a system,” the Governor said.

But while a shift to emergency department visits as a leading metric would be a convenient change, DeSantis acknowledged it was a flip.

“I was religiously hyping positivity in March, April, May, because I was like, you know what, this is an asymptomatic illness largely for most people,” he said.

“That’s a change for me,” he added. “If you go back, I can probably find you examples of me in May talking about positivity is really important. I’m not saying it’s not something you would never consider ever, but I think we’ve understood some of the limitations.”

DeSantis insisted emergency department visits have been the best indicator, picking up rise and fall in infections before the positivity rates did.

“For a state this big, ED visits just flat, flat, flat beginning of June,” he said. “Then as we got into that mid part of June, we started to see the ED visits going up. The testing wasn’t even capturing that at that time, because the testing, these are seven-day turnarounds sometimes by the time they put that into the system.”

Emergency department visits began spiking dramatically around the second or third week of June. But in that third week, the Governor was denying suggestions by the press that daily diagnoses and the percent positivity rates indicated outbreaks were on the rise as he maintained Florida would not reverse its reopening plan.

Florida does not have the raw emergency department data available each day in a forward-facing window in its COVID-19 reporting. However, it does have weekly data, which reduces outlying spikes up or down.

The Department of Health’s COVID-19 dashboard shows the weekly total of visits for symptoms related to COVID-19 and the flu. And the daily pandemic report graphs the share of visits for cough or fever and shortness of breath as a share of total visits each day but without listing the actual percentage.

Schools will reopen later this month, the Governor told reporters. He pointed to results out of Scandinavia that suggested schools have not been outbreak drivers.

“Sweden and Norway put out a joint statement recently saying ‘Norway shut down schools. Sweden didn’t. Guess what? Sweden was right.’ It did not increase the spread in the community.”

Both state and federal reopening guidelines released in April say officials should consider emergency department visits alongside either declining total cases or a declining positivity rate.

previousPoll: Most Floridians think the pandemic's worst is yet to come