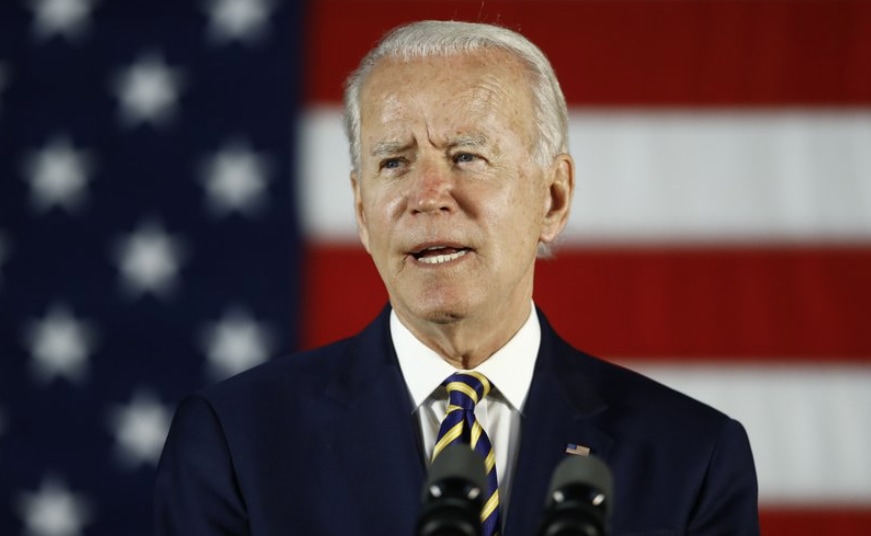 Biden's distinction drawing scrutiny over how he discusses race.

Democratic presidential candidate Joe Biden faces new scrutiny over how he discusses race and ethnicity after drawing distinctions between Black and Hispanic populations in the United States.

“By the way, what you all know but most people don’t know, unlike the African American community, with notable exceptions, the Latino community is an incredibly diverse community with incredibly different attitudes about different things,” Biden said to a Latina reporter from National Public Radio in an interview released Thursday.

“You go to Florida,” Biden continued, “you find a very different attitude about immigration in certain places than you do when you’re in Arizona. So it’s a very different, very diverse community.”

Biden’s observation, part of a series of interviews with Black and Hispanic journalists, came during a back-and-forth over U.S.-Cuba policy. The former vice president was alluding to the dozens of national origins that make up the U.S. Hispanic population, especially in Florida, a presidential battleground. And his campaign noted that he was talking about political differences, not cultural diversity.

But edited snippets of his interview spread quickly and became the latest example of Biden, who is white, drawing a negative spotlight when he’s trying to convince voters he’ll make the nation more equitable.

President Donald Trump, who is favored by many fewer Blacks than Biden in polls, seized on Biden’s remarks, declaring them “very insulting.” He later tweeted that “Joe Biden just lost the entire African American community.”

Symone Sanders, a top Biden adviser said, “The video that is circulating is conveniently cut to make this about racial diversity, but that’s not the case.”

The potential fallout is nonetheless frustrating for Democrats. Trump is already seen by a majority of Americans as racially divisive. But the stakes magnify every Biden slip, real or perceived.

“People are going to use this, particularly Joe Biden’s adversaries. Even those who are not 100% on board with Joe Biden’s candidacy are going to look for reasons not to support him,” said Antjuan Seawright, a Democratic consultant and Biden supporter in South Carolina, an early primary state where strong Black support propelled Biden to the Democratic nomination.

In May, Biden had to walk back a quip that any Black voter who’s “got a problem figuring out whether you’re for me or for Trump … ain’t black.” Within hours he was on a call with U.S. Black Chamber of Commerce members declaring he’d been too cavalier.

“I shouldn’t have been such a wise guy,” Biden said.

In a separate interview this week, Errol Barnett of CBS News pressed Biden on whether he’d take and release a cognitive assessment by a physician, as his fellow septuagenarian Trump has challenged him to do. Biden responded testily to the Black journalist, saying the question was akin to someone demanding that Barnett take a drug test to see if “you’re taking cocaine or not? … Are you a junkie?”

Biden reminded campaign donors last June that he had to work in the 1970s alongside segregationist senators, describing the “civility” of that congressional era even if “we didn’t agree.” He explained later that he wasn’t praising racists but instead highlighting that Congress must get things done even with bad actors involved.

His latest comments came as Biden decides on a running mate, with several women of color among his finalists. The timing increases the likelihood that his choice will be pressured to explain or interpret how Biden talks about race and ethnicity.

To be sure, polling shows Black Americans overwhelmingly support Biden over Trump. Biden has a lead among Latinos, as well. Both trends roughly reflect recent presidential elections, with Democrats drawing more diverse support and Republicans leaning much more heavily on white voters.

Biden regularly condemns Trump for pushing “hate and division,” including the President’s defense of Confederate monuments, the Confederate battle flag and his pledge to keep the names of Confederate officers on some U.S. military bases. Biden talks plainly of systemic inequalities and institutional racism that traces from slavery through Jim Crow segregation and the current criminal justice system and economy, links that Trump plays down or denies.

“I know Joe Biden’s heart, and more importantly, he knows us,” said Seawright, who is Black. “I’m happy with who I think he’ll be as President on the issues that matter to our community.”

For example, in Wayne County, Michigan, where Detroit is located, Clinton fell about 76,000 votes short of what President Barack Obama drew in 2012 from the state’s most concentrated Black population. Trump’s statewide margin: about 10,700 votes.

Trump’s allies are keen on those undercurrents.

“This is no accident,” Dan Murtaugh, spokesman for Trump’s re-election campaign, said of Biden’s latest comments. “Now, he wants them all to agree that we all know that all black people think alike. It’s nuts.”

Some Hispanic voters, meanwhile, are seeing an ad from a Trump-aligned political action committee that uses a false claim to sew division over Biden’s vice-presidential choice.

The Spanish-language ad praises the accomplishments of Latino Americans. “But that’s not good enough for Joe Biden,” a narrator states before adding, falsely, “He’s promised his party an African American vice president. Not a Latino.”

Biden has promised only to select a woman.