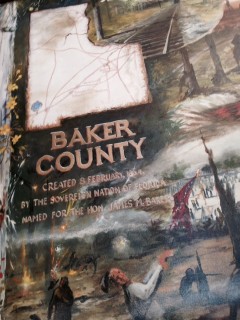 Baker County is one of Northeast Florida’s most rural counties. But it is now seeing an unusual increase in coronavirus cases and inordinately high positive test rates for the illness, due largely in part to correctional facilities in the county.

In the past week, Baker County has more than doubled its total recorded cases of COVID-19 going from 423 cases on Aug. 4 to 932 total infections, according to Florida Department of Health figures released Monday.

Another wild statistic is the extreme increase in the positivity rate for infections which started to pick up Aug. 5 at 27.9% and increased to Saturday’s high of 36.9%. Even Monday’s figure showed a 33.8% positivity rate when 25 new cases were added to the count.

Baker has held steady at four fatalities due to the illness for several weeks.

But Baker County has largely been a footnote in the coronavirus pandemic on the First Coast since the outbreak. The county did gain some state attention when 10 patients at the MacClenny Nursing and Nursing and Rehab Center contracted the illness over a couple-day span in April.

Baker County has only one public COVID-19 testing center at the CVS pharmacy on West MacClenny Ave.

The DOH confirmed Monday afternoon that about 50% of all Baker County infections are centered at the correctional facility.

Croft said while Baker County has dodged any significant influx of COVID-19 infections during most of the pandemic, many of the residents who travel to Jacksonville for their jobs stayed home for weeks on end during the thrust of the outbreak. But they’ve recently returned to those jobs and that might also be contributing to the uptick.

“When the shut down came, 60% of our population worked in other counties, mainly Duval County,” Croft said. “Our people were at home so we didn’t see our numbers jump up.

“I wondered when things began to open up and people started crossing county lines, would we see an increase,” Croft said.

Meanwhile, Baker County’s coronavirus figures are going in the opposite direction of the rest of the five-county First Coast region.

Jacksonville now has a total of 23,530 infections while adding another fatality Monday for a total of 189. Jacksonville’s positivity test rate dropped below 6% for the first time in weeks  coming in at 5.5%.

In other First Coast counties;

Around Florida, there are now 536,961 cases of coronavirus and 8,408 fatalities attributed to the pandemic.