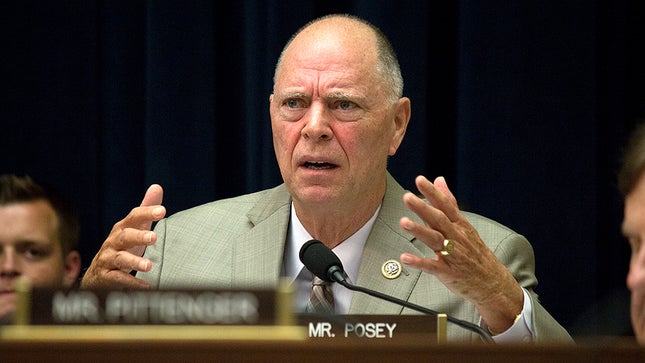 Scott Caine may be getting under Posey's skin. But is it enough for an upset?

It has been a while since Republican Rep. Bill Posey has had a challenger get under his skin.

The last time Posey was seriously challenged in a race was the first time he ran for Congress in 2008, when he won by only 11 points over Democrat Stephen Blythe. Since then, the Space Coast congressional district, now Florida’s 8th Congressional District, has been a place where Democrats really shouldn’t have bothered, as Posey routinely gets reelected by landslides. And Posey hasn’t had a primary challenger since that first year, when he won the Republican primary by 60 points.

Tuesday, however, he’s facing retired Air Force Col. Scott Caine. He has been attacking Posey relentlessly with a campaign funded and organized enough to run TV and digital advertising along with mailers and occasional opposition research hits, though the hits have mostly missed the mark.

While he hardly has been known as a prominent lawmaker, Posey’s six-term run in Congress has marked him as a reliable conservative vote. He’s also played a prominent roll on the House Space Subcommittee, the one committee that can and has rained lots of federal dollars into Brevard County, where most CD 8 voters live. The county also includes a small, mostly rural portion of Orange County and Indian River County.

Caine has been hammering Posey, trying to position himself as the true loyalist to President Donal Trump and, as a decorated military veteran and Air Force pilot who is a natural stalwart of national defense and conservative policies, important issues in CD 8.

But Posey, a former state Senator and a former state Representative, has been representing at least part of the district since 1992,  so he and his record are well-established. He has not conceded anything to Caine on loyalty to Trump (who has endorsed Posey) or conservative values.

Still, Tuesday’s primary may be as serious a challenge as Posey has experienced in decades.

Voters will be deciding if their long familiarity with Posey and his conservative record make them comfortable enough to reject the younger, brasher, more glittery Caine, with his wings and tougher talk about supporting the President.

The winner likely will be elected in November. The district gives Republicans a 13-point advantage in voter registration but has voted for Republicans far more convincingly than that in recent elections. And Democratic candidate Jim Kennedy‘s campaign has been less than dynamic.

Last week, Caine changed direction from attacking Posey for a little bit, putting out a multi-point economic recovery plan he called his “Flight Plan for Relaunching America’s Economy.” The plan includes a number of Republican standards, such as opposing socialism and cutting taxes and regulation.  But it also made some pointed proposals such as busting public employee unions and investing heavily in 5G communications technologies and other emerging technologies.

Posey points to his support for Trump’s agenda over the past three and a half years, including supporting the Republican tax cuts bill and pushing for inexpensive American energy, while vowing to continue to try to dismantle the Affordable Care Act.

previousDanny Kushmer, Michael Owen battle for the chance to reclaim HD 59 for Republicans