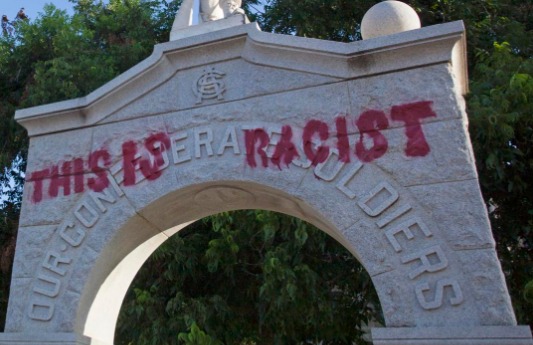 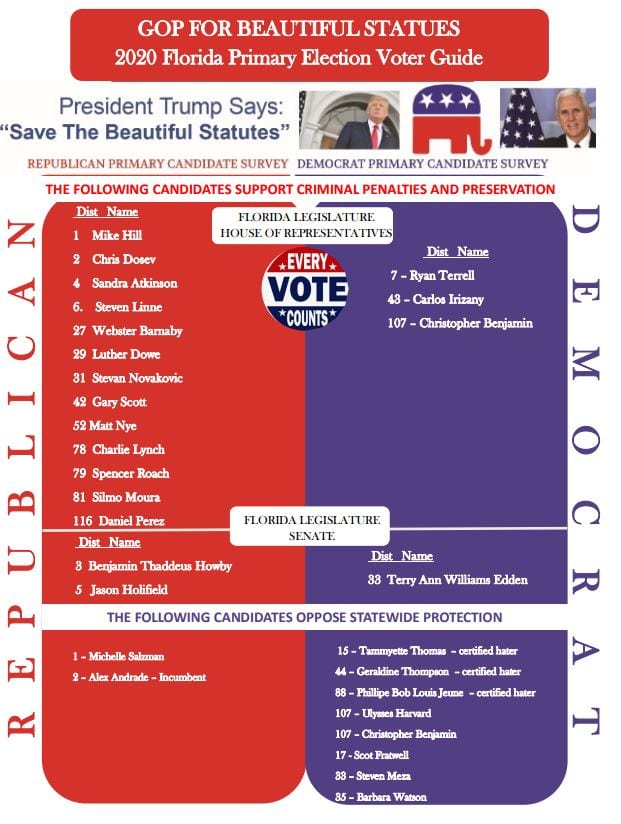 Both Pensacola Republicans are running in contested primaries to represent parts of Escambia County in the House of Representatives. But neither candidate opposes “statewide protection” as the flyer, released the weekend before Tuesday’s Primary Election, suggests.

Andrade, a freshman Representative running for a second term, has never publicly commented on removing Confederate statues and told Florida Politics he doesn’t plan to ahead of Tuesday.

And Salzman, a political newcomer, told WUWF in July she doesn’t personally support removing Confederate monuments. But she indicated she would defer to her constituents and didn’t want to address the removal of one monument in Pensacola that isn’t located in HD 1.

Andrade and Salzman are the only Republicans named as opponents of Confederate Monuments on the flyer. Meanwhile, their opponents, HD 1 Rep. Mike Hill and Andrade’s House District 2 challenger Cris Dosev, are among 15 Republican candidates listed as supporting “criminal penalties and preservation.”

Hill has repeatedly filed legislation prohibiting the damage or removal of monuments to veterans of the Civil War, among other wars and battles. But the establishment is backing Salzman, giving the incumbent his strongest challenge yet in the district.

Dosev has aligned himself with Hill and is also coming into the race as an outsider, but an experienced one.

Both districts are ruby red, making the anti-monument accusations against Andrade and Salzman potentially damaging. It isn’t the first time either race has turned dirty.

The flyer quotes President Donald Trump as saying “save our beautiful statutes,” a misspelling that stems from an August 2017 tweet the week after Unite the Right protesters marched in Charlottesville, Virginia. That march stoked racial tensions nationwide as the President defended the protesters.

Two months later, the Trump Says: Save Our History & Beautiful Statues Facebook page was created. The page has remained active since and maintains 446 followers.

A similar flyer covered statewide and Congressional races in 2018.

“Do you agree with Pres. Trump that we should stand against Debbie Wasserman Schultz, Black Lives Matter & Anti-FA to protect our beautiful statues?” the page’s description reads.

The flyer also endorses Reps. Daniel Perez and Spencer Roach. And the group backs Sandra Atkinson, who is at the bottom of the pack in the crowded primary for House District 4 in Okaloosa County.

But four Democrats get the group’s nod, including Ryan Terrell, who is disqualified in House District 7 and has been arrested twice this year on meth charges. It also endorses Carlos Irizarry in House District 43, but misspells his last name as Irizany.