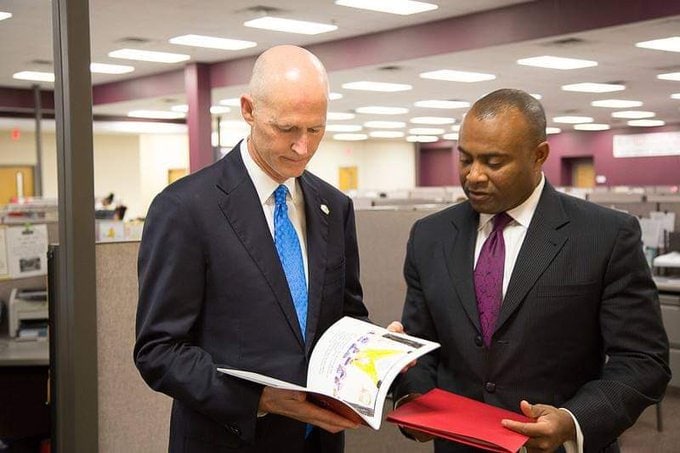 Former Gov. Rick Scott on Tuesday came to the defense of  Ken Lawson, the former head of the Department of Economic Opportunity.

“Ken Lawson is a good friend who has been committed to serving the people of Florida. I wish him all the best in this next phase,” Scott tweeted, just a little more than 24 hours after Lawson’s resignation became public knowledge.

Though Lawson helmed DEO since 2019, he was one of a few high-profile holdovers from the Scott era. Lawson worked in Scott’s administration as CEO of VISIT FLORIDA and Secretary of the Department of Business and Professional Regulation.

But it’s Lawson’s DEO tenure, or the denouement thereof, that will be remembered.

The Governor had been frustrated by a weeks-long inability to get data on claims and their fulfillment status, he said at the time and even after Lawson was headed out the door.

In comments to media Monday, the Governor reminded reporters that Lawson had been rendered redundant, crediting Department of Management Services Secretary Jonathan Satter with “getting it going;” it being the unemployment system.

The Governor has respectively blamed Scott and Lawson for procuring the failed system and being responsible for it more recently, and as struggles to make the system more functional proved profound, DeSantis turned colorful phrases condemning the platform.

“The system broke,” DeSantis said, “In fact, the system was so bad it basically needed to be redesigned,” the Governor said in May.

The Scott/DeSantis sniping continued through the summer.

In an interview with Jim DeFede of CBS 4 in Miami in August, the Governor again reminded Floridians that he inherited the failed CONNECT system from his predecessor.

“I think the goal was for whoever designed, it was, ‘Let’s put as many kind of pointless roadblocks along the way, so people just say, oh, the hell with it, I’m not going to do that’,” DeSantis said.

“I’m not sure if it was his [intention], but I think definitely in terms of how it was internally constructed, you know. It was definitely done in a way to lead to the least number of claims being paid out.”

For his part, Scott seems to have wearied of the repeated canards from DeSantis.

Ken Lawson is a good friend who has been committed to serving the people of Florida.

I wish him all the best in this next phase. pic.twitter.com/lzSbBWjo7D