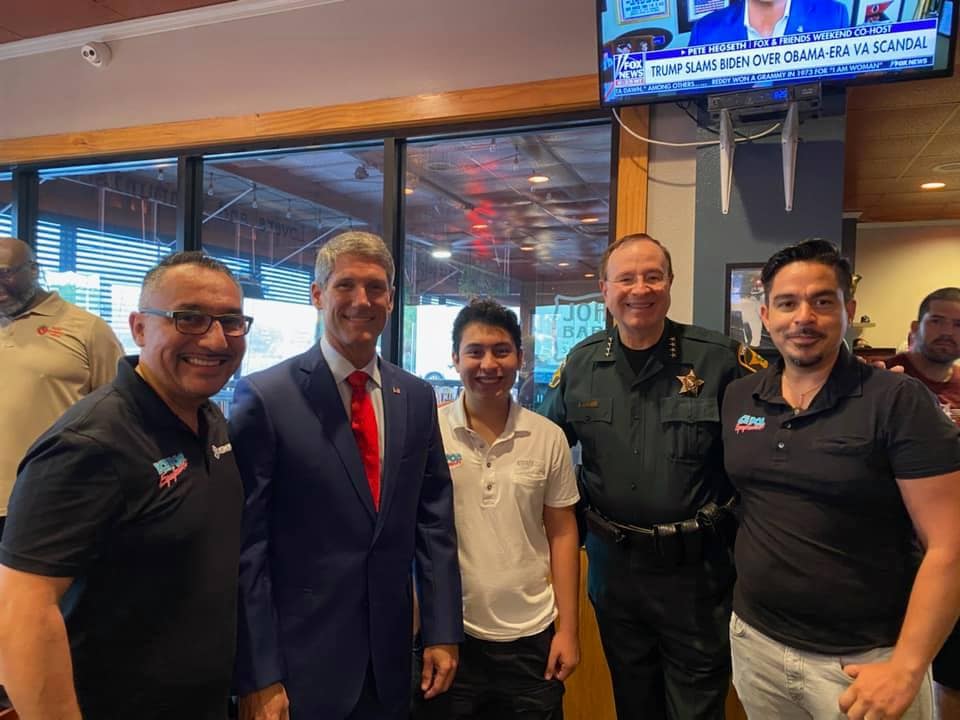 The Florida Democratic Party is going after Republican Scott Franklin, a candidate for Florida’s 15th Congressional District, over campaign events this weekend in which he was indoors in close proximity to voters without wearing a mask.

With President Donald Trump recovering from COVID-19 at the White House after a positive diagnosis last week, the criticism is indicative of a renewed campaign strategy for Democrats that attempts to paint conservatives as dismissive of the virus’ effects and complacent in employing preventative measures.

“Scott Franklin is failing to deliver the leadership Florida needs during this once-in-a-century pandemic — he is disregarding the public health guidance and scientific evidence on what we need to do to stop the spread of the virus,” said FDP Spokeswoman, Alexandra Caffrey “It is the height of recklessness, but it’s not surprising coming from an individual who has dismissed the threat of the Coronavirus from the very beginning. Franklin falsely claimed masks “do more harm than good”, suggested a mask mandate is a slippery slope to establishing Japanese Internment Camps, and said relief funds for families and small businesses were “a waste of money.”

Franklin is in a tough race for a now open seat against Democrat Alan Cohn. He’s not alone in facing scrutiny from Democrats in a contentious and unprecedented election year.

With Trump at the top of the ticket, down ballot Republicans face trickle down effects from presidential sentiment. Right now, that might not be good for the party as a whole.

The most recent Florida survey, conducted by the University of North Florida Public Opinion Research Lab, show Gov. Ron DeSantis and U.S. Sens. Marco Rubio and Rick Scott polling underwater with unfavorable ratings above 50%. While none of them are on this year’s ballot, other results in the poll show bad news for Republicans who are.

DeSantis, for months, has been criticized (or lauded if you ask fellow Republicans) over his allegiance to President Trump. DeSantis recently put the state into Phase 3 of his reopening plan, which removes restrictions on restaurants and businesses and blocks local governments from imposing punitive measures against those who break local coronavirus-related ordinances, including for mask-wearing.

Asked about the Governor’s handling, 52% of voters in the UNF poll said Florida has moved too quickly regarding the lifting of social distancing requirements.

Those leading sentiments, paired with the most recent criticism of Trump immediately removing his mask when he returned to the White House after being hospitalized with COVID-19 for four days, make photos like the ones Franklin shared ripe for Democratic take-downs.

But the GOP may be stuck between a rock and a hard place. It might seem easy to just strap on a mask and avoid the criticism, but doing that risks alienating their own base. It’s also not guaranteed to buck the negative talking points as Democrats will likely still tie Republican candidates to previous actions or comments or to the leader of their party.

It’s a dilemma that shows just how fundamentally different this election is to any other voters have seen.