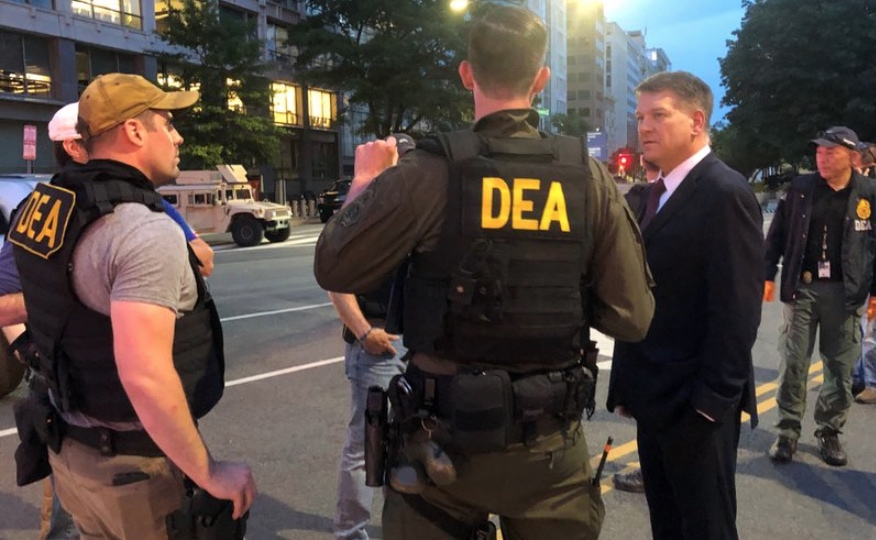 More than 1,500 people have been arrested on state and federal criminal charges in the last three months as part of a Drug Enforcement Administration project focusing on violent crime, the agency’s acting administrator told The Associated Press.

Since the operation launched in August, 1,521 people have been arrested in both state and federal cases in cities across the U.S. — including nearly 40 federal fugitives — and 2,135 firearms have been seized, acting DEA Administrator Tim Shea said in an interview with the AP.

Such operations are common for the federal government, but the issue of law-and-order is a major component of President Donald Trump’s reelection campaign. The initiative, nicknamed Project Safeguard, comes as Trump is touting the federal government’s involvement in other operations as an answer to a spike in crime in cities nationwide, and to showcase what he says is his law-and-order prowess, claiming he’s countering lawlessness in Democrat-run cities.

But spiking crime defies easy explanation, experts say, pointing to a toxic mix of issues facing America in 2020: an unemployment rate not seen in a generation, a pandemic that has killed more than 220,000 people, stay-at-home orders, rising anger over police misconduct, intense stress and even the weather.

The DEA — under the umbrella of the Department of Justice — is responsible for investigating major drug cases and international drug smuggling, along with drug gangs who are often responsible for upticks in violence within communities. The agency has been roiled in recent years by allegations of misconduct, including a number of agents who have been prosecuted for bribery and other offenses, and allegations of racial harassment.

As part of the project, the agency has changed some of the structure of its operations, including assigning specific coordinators in each field office for violent crime and working with the Bureau of Alcohol, Tobacco, Firearms and Explosives to trace guns that are used in drug crimes or by suspected drug traffickers, officials said.

The DEA also seized 162 kilograms of heroin and 158 kilograms of fentanyl, along with about $24 million in assets since the operation launched on Aug. 1, officials said.

The federal government’s resources provide value for local law enforcement officials and agents can use specific government databases and share intelligence to link street-level dealers to larger networks and cartels, Shea said. He said the agents being assigned to the cases also bring “sophisticated organizational investigations,” targeting the leaders of drug-trafficking organizations.

“By going after the violent crime, we’ve been able to investigate the larger regional groups,” Shea said.

The initiative, while similar to the much-touted Operation Legend — a Justice Department partnership with local law enforcement officials in about a dozen cities across the U.S. aimed at reducing crime, working to solve outstanding cases and prioritizing the arrest of violent criminals — is meant to be a longer-term initiative at the DEA and emphasize the importance of going after criminals who are committing violent street crime, Shea said.

In some cases, agents have been able to directly trace drugs being sold by street-level dealers in U.S. cities to cartels in Mexico, allowing DEA to expand its intelligence, he said.

The initiative is being announced at a news conference in Boston, Massachusetts, where officials will also discuss a monthslong investigation targeting street-level cocaine and fentanyl distributors that resulted in 14 arrest warrants and eight search warrants in Massachusetts and Rhode Island.

“It is a different way to look at it, but we’re getting the same result,” Shea said. “Plus, we’re addressing the violent crime problem in these localities.”

Republished with permission from The Associated Press,