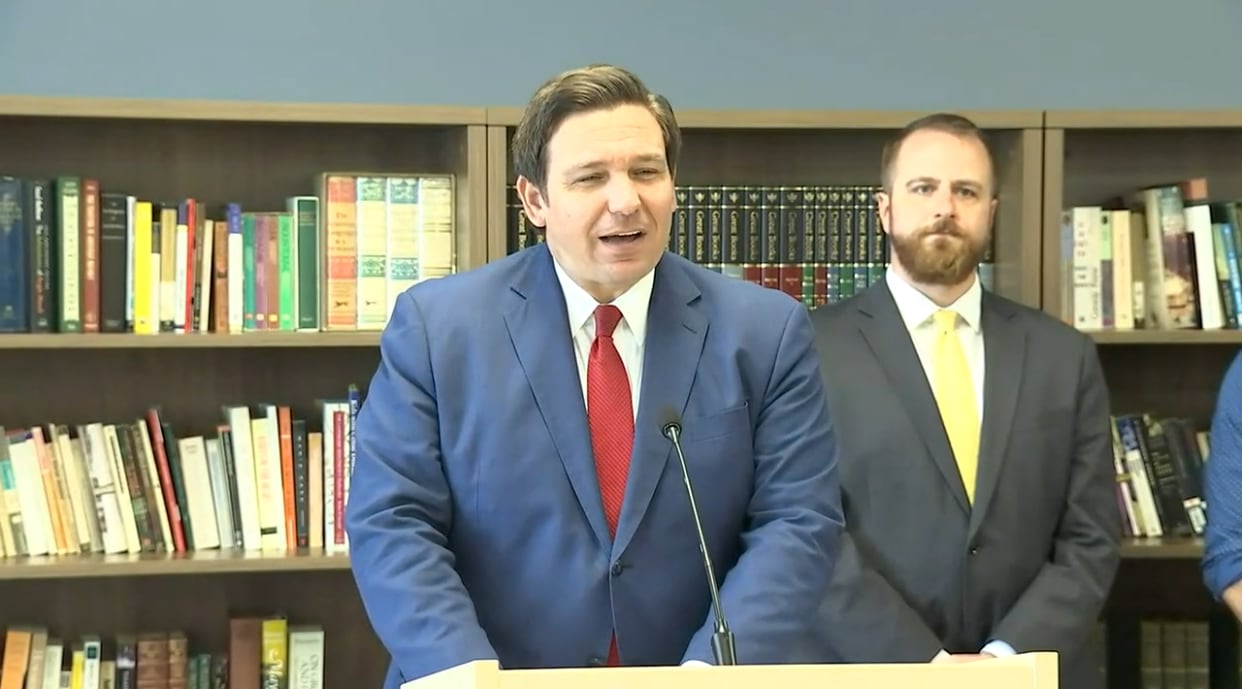 The Governor was not at a district-run public school such as Fletcher or Douglas Anderson High Schools, as both of those schools are closed because of coronavirus clusters. Indeed, reporters’ questions revealed DeSantis didn’t know that Jacksonville schools were dealing with virus shutdowns.

Rather, he was at the Jacksonville Classical Academy, a charter school in Mixon Town that is affiliated with conservative Hillsdale College, an endeavor funded by big-time GOP donor Ambassador John Rood.

The Governor has been undaunted by negative stories on school children and the novel coronavirus, saying that the young are not susceptible like older people and calling opponents of his position “flat earthers.“

Remarks Tuesday did not deviate from those parameters, with DeSantis lauding charter and private schools for leading the way on school reopening, despite objections from the public school teachers union.

“Their goal was to keep kids out of school and they were wrong,” DeSantis said about the Florida Education Association‘s opposition to brick and mortar school openings.

DeSantis said that “when we looked at what went on with our school system, the physical, emotional and social well being of kids” was the first priority.

The “evidence was abundantly clear then and it’s clearer now that schools are not drivers of coronavirus and they need to be open.”

DeSantis said kids have been back in school for two months in most of the state.

“Pretty much everyone acknowledges that having schools open is the right thing to do,” DeSantis said, saying “in-person instruction is vital and needs to continue.”

The FEA, Florida’s largest teachers union, does not fall in that category. The FEA has spent significantly on advertising slamming the DeSantis’ administration’s lack of transparency on campus outbreaks.

The Governor also celebrated sports being back for students, saying he hopes to get to more games as time permits.

“Going forward, whatever the future may hold, school closures should be off the table,” DeSantis said.

“Closing the schools is not the best option,” DeSantis said in response to reporters’ questions about the two shuttered schools, saying “the more surgical approach, the better” rather than taking out a “perfectly healthy” student from school.

“Unless they test positive, why would you want to force them out of school,” DeSantis said, saying that “we’ve got to move beyond closures” and their “devastating” costs.

“There’s 50 governors in the country,” Corcoran said. “Only one Governor went through all the data, all the forensics.”

The Commissioner noted that Florida’s five urban school districts are open, five of the top 20 in the country.

“COVID, when it comes to these school children, is de mininis, or no risk,” Corcoran added, saying that what Florida has done is “absolutely special and great.”

DeSantis has often employed Jacksonville as a backdrop for getting a more unvarnished message across than some other markets might get.

In repeated visits to the city, he blasted the “drive-by smears” of the elite media that derided locals as “Florida morons” for going to the beach and catching some waves amid the pandemic.

Perhaps it was that expectation of a friendly audience that ultimately led the Commissioner and the Governor to the city Tuesday.

It’s not the first time DeSantis has trekked to the Jacksonville school for a press event. He chose the academy as the venue for a victory lap last year on his Bold Vision for High Quality Education agenda, which included an increase in eligibility for school choice programs in Florida. Legislation passed last year will allow about 18,000 more students to elect for private schools through a state-facilitated scholarship program.

previousBarack Obama to campaign for Joe Biden in Miami on Saturday