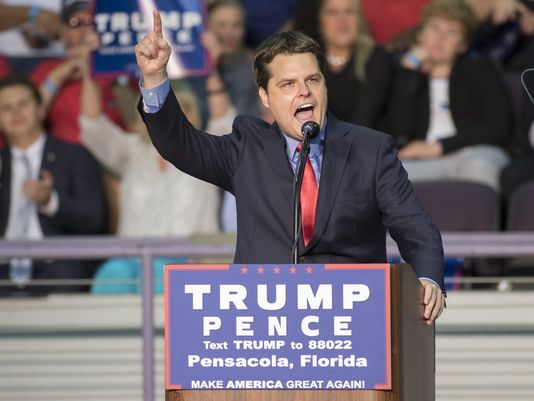 The President and Representative will appear in Pensacola Friday evening.

Ahead of President Donald Trump‘s rally in Pensacola Friday evening, Florida Agriculture Commissioner Nikki Fried and Democratic candidates in the Panhandle targeted Republicans over the coronavirus pandemic and the military.

After rallying supporters in The Villages Friday, the President will fly to Pensacola International Airport for another pair of campaign stops in the Sunshine State with just 11 days until Election Day. But while both parts of the state have been strongholds for the President, Phil Ehr and Karen Butler hope a favorable national environment for Democrats could make the Panhandle interesting on Nov. 3.

“I believe that we are going to see the Central time zone come in with some surprises at the national level and in our race to make sure that we are restoring honor and integrity to Northwest Florida,” Ehr said during a Florida Democratic Party press conference.

Fried, the lone statewide-elected Democrat and state party figurehead, hit Trump as divisive and for bringing “no plan” on the pandemic and economic recovery. The President’s message, she said, is “we’re learning to live with it.”

“When in a time have we seen a President not only lie to the American people but put our safety at risk from not telling us the truth and giving us all of the tools that we need to protect our families, protect our loved ones, protect our communities,” Fried said.

She also attacked Gov. Ron DeSantis and other Republicans at the state level for not convening a Special Session to fix the unemployment system, which crashed early in the pandemic under the weight of thousands of applicants.

Ehr, U.S. Rep. Matt Gaetz‘ challenger in Florida’s First Congressional District, said he would work for unity. He pegged the two-term Representative for peddling “in lies, distractions and distortions.”

And Ehr, a Navy veteran, criticized Gaetz for not focusing on reports that Russia had placed bounties on American troops in Afghanistan despite his role on the Armed Services Committee.

“That needs to be forefront, because that is us,” he said. “That is our blood. Those are our treasured patriots.”

Butler, an Air Force veteran, elevated the issue to the presidency.

“We deserve a commander-in-chief who is there to support our military and not to use them as pawns or to be targets for bounties.”

In veteran-heavy Pensacola and the Panhandle, Ehr hoped his message could draw supporters away from Gaetz based on character. Again, he called the incumbent “entitled,” a label Gaetz appeared to embrace Thursday.

Butler did not mention her opponent, State Sen. Doug Broxson of Senate District 1, but she shared the story of her interaction with Biden years ago. The then-U.S. Senator came to visit Dover Air Force Base, where she showed him a project she was working on.

“I shook his hand and said I need a million dollars,” she recalled. “While everybody was petrified that he asked for it, he continued to shake my hand and he said, ‘I’ll make that happen,’ and he did. He always been there for the military.”

As Fried hit Trump on the national pandemic response and 220,000 American lives lost, Ehr issued a warning to the President and his supporters.

“Please be safe. Wear masks. Think about the virus. The virus is not going to care about anything except finding your bodies,” he said. “If you go spreading it to the rest of us, just think about that.”

previous'Souls to the Polls' in St. Pete Saturday