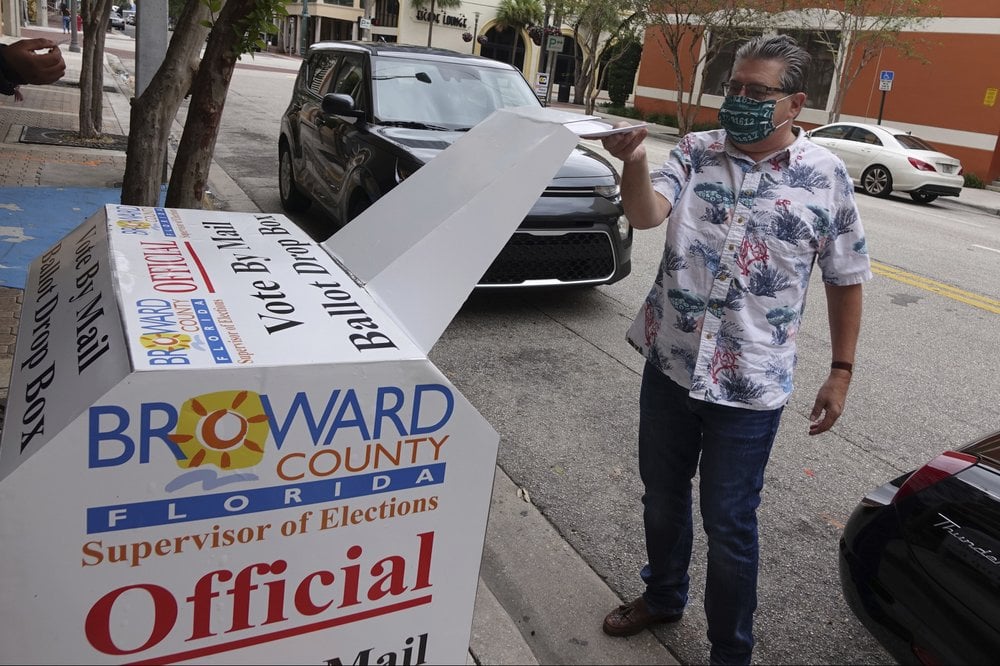 Multiple issues on the Florida ballot have the nation's attention.

After setting records for votes cast before Election Day, Floridians are lining up for in a final day of voting in a state that has 29 Electoral College votes seen as vital for President Donald Trump’s reelection chances.

Once again, Florida is seen as a toss-up. Polls have shown the Republican incumbent and Democratic former Vice President Joe Biden virtually tied. And while Democrats dominated vote-by-mail ballots, Republicans closed the gap with early in-person voting and are expected to turn out in higher numbers Tuesday.

“It’s going to be close,” said Michael Binder, who runs the University of North Florida Public Opinion Research Lab. He said the margin of victory would likely be within 1 percentage point. “Two percent is a blowout of epic proportions in the state of Florida,” he said.

In addition to the presidential election, Florida has a handful of close Congressional races as Democrats hope to outnumber Republicans in the U.S. House for the first time in decades.

Floridians will vote on six proposed constitutional amendments, including one that would gradually raise the minimum wage to $15 an hour, and Republicans will seek to keep their majority in the state House and Senate.

But the contest between Trump and Biden is the main event and the outcome is anything but clear.

In St. Petersburg, attorney Michele Peters said during early voting Friday that she was choosing Biden, in part because of Trump’s response to the COVID-19 pandemic and what she said was his acting “like this doesn’t even exist.”

“We need a person at the helm who is going to lead with our scientists — lead and say we have this under control,” Peters said.

In Tallahassee, elementary school teacher Troy Yeomans, 22, said Biden wouldn’t have done anything differently in response to the pandemic, and that he was supporting Trump.

“We need to be opened back up. I think it would do more harm if we were all shut up for another six months,” Yeomans said Friday. He added that he opposed Biden’s tax plan and what Yeomans called “socialist medicine.″

Florida set the standard for close presidential elections in 2000, when George W. Bush defeated Al Gore by 537 votes out of nearly 6 million cast. It took five weeks and a U.S. Supreme Court order halting a messy recount process before Florida determined who would the next president.

Trump and Vice President Mike Pence and Biden and running mate Sen. Kamala Harris have made multiple campaign stops in Florida in the final weeks of the election, as have Trump’s family and Obama.

In part because of the coronavirus pandemic, Florida already broke a record for ballots cast by mail with more than 4.6 million counted as of Monday morning. That compares with 2.7 million votes by mail in the 2016 election.

Mail-in ballots will be accepted until polls close Tuesday. Members of the military who are deployed outside the United States and citizens who live overseas have an additional 10 days to have their ballots counted as long as they are postmarked by Election Day — which could be a factor in a tight election.

Florida also had more than 4.3 million ballots votes cast at early voting sites. That compares with nearly 3.9 million in 2016.

Florida now has 14 Republicans and 13 Democrats in the U.S. House. The last time Democrats outnumbered Republicans in the state’s congressional delegation was the two years after the 1986 election. That could change if Democrats successfully defend their 13 incumbents and pick up one Republican seat. The best chance to do so might be the central Florida seat Republican U.S. Rep. Ross Spano is losing after being beat in the primary.

The six ballot questions range from property tax breaks to a proposal to overhaul Florida’s primary election system. The one getting the most attention would to raise the minimum wage to $15 an hour by 2026. All the proposed constitutional amendments need 60% approval to pass.

Republished with permission of the Assocated Press.