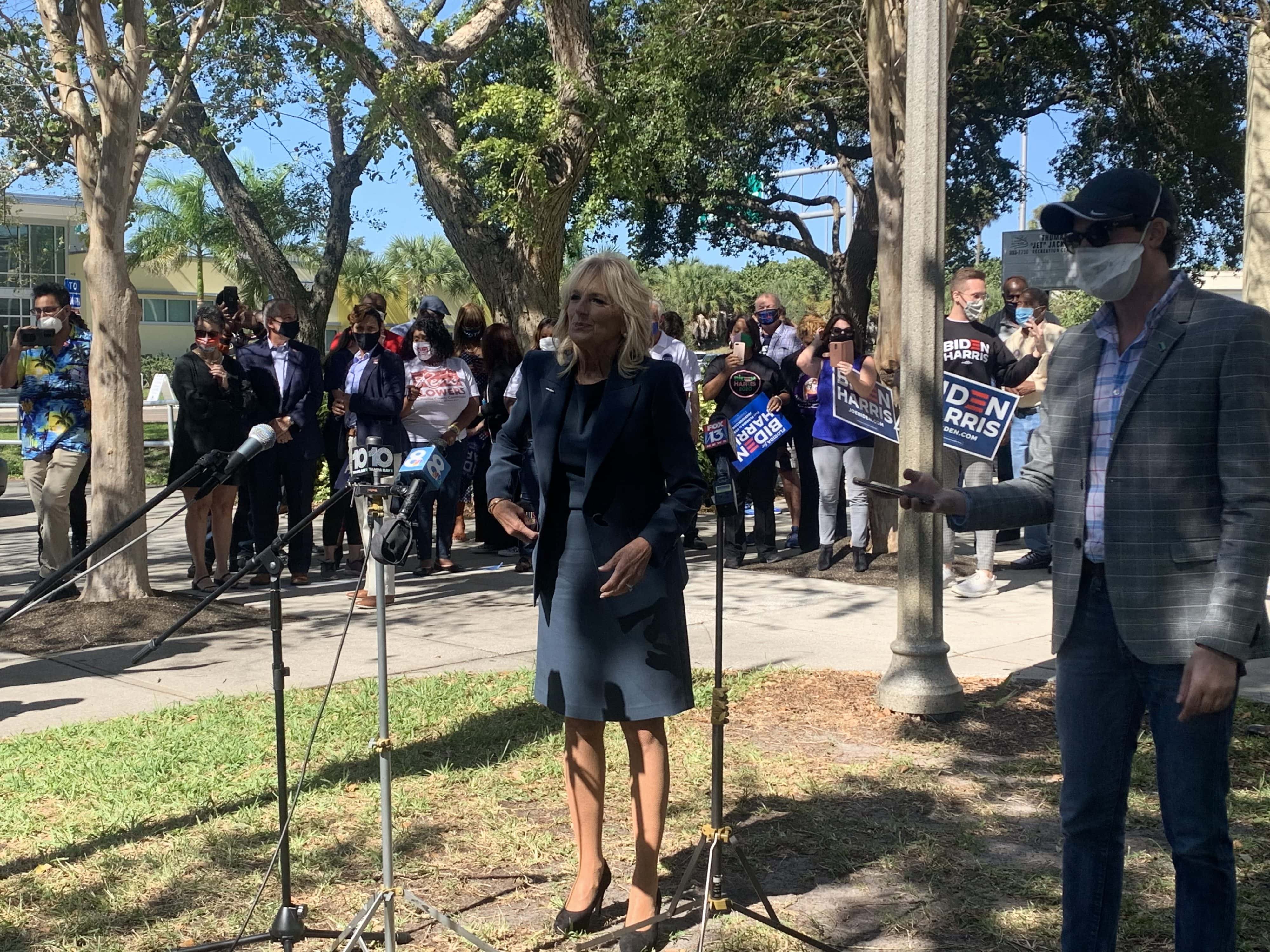 In the waning hours of the election, Jill Biden, wife of former Vice President and Democratic Presidential Nominee Joe Biden, breezed through the Tampa Bay area in one final push to get out the vote.

The prospective FLOTUS first stopped at Thomas Jackson Recreation Center in south St. Pete, where she brought baked goods to volunteers outside the polling place. Speaking to reporters after firing up the dozens gathered to see her, she offered a sunny outlook despite the uncertainty surrounding Florida’s final tally, but said the Biden camp is well aware nothing is a given.

“Florida’s a very important state,” she said. “We are hoping to win it. We are not taking any vote for granted. Joe and I are out here working as hard as we can.”

Her visit took place just before noon. At roughly the same time she spoke, voter turnout in Pinellas and Hillsborough Counties surpassed their respective overall turnout for 2016.

It is likely that Biden appeared in Tampa Bay because of the area’s critical role in the national political landscape. As the western anchor of the I-4 corridor, which many politicos see as a bellwether for national elections, winning here could help drive the narrative nationwide. Tampa Bay is the largest media market in the largest swing state, and is itself a region known to fluctuate between blue and red.

While polling (including a Change Research poll released on Election Day) has generally shown the former Vice President ahead in Florida, his margins have always been narrow – often well within the margin of error. And while Democratic voters blew away registered Republicans in mail-in-ballot voting, the latter caught up during early voting, and many more are expected to come to the polls on Election Day. In Pinellas, turnout data by party updated at around 12:50 p.m. on Election Day showed Republican turnout surpassing that of Democrats by about 1,200 voters (195,667 to 194,431). NPA votes totaled 119,572, while the tally for “other” was just 7,788. Yet polling suggests there might be some crossing of party lines. A St. Pete Polls survey of Pinellas County released on Election Day has Biden leading President Trump by nine points.

Before she arrived, mask-wearing supporters waited in the shade. Among them were local Democratic dignitaries, including Congressman Charlie Crist, Sen. Darryl Rouson, Rep. Jennifer Webb, St. Petersburg Mayor Rick Kriseman and School Board Member Renee Flowers, who is running to represent south St. Pete on the Pinellas County Commission.

As Biden walked up carrying a straw bag filled with the aforementioned sweets, the crowd turned and cheered.

Asked why it’s important for eligible voters to not sit this one out, she cited numerous critical issues.

“There’s so much at stake,” she said. “I don’t care if you’re worried about climate change, education, healthcare, gun control, whatever it is that you really, truly care about. It’s all at stake.”

She added that her husband and the incumbent couldn’t be more different from one another.

“If you’re looking for a President that is strong and resilient, that will be a steady calm leader to get rid of this chaos of Donald Trump’s America, if you’re tired of it all, then you must vote for my husband, Joe Biden,” she said before heading off to a second event in Tampa.

previousCount Every Hero: Never leave a soldier behind — battlefield or ballot box

nextProgress for Florida founder believes 'Florida is blue.' Can she prove it?