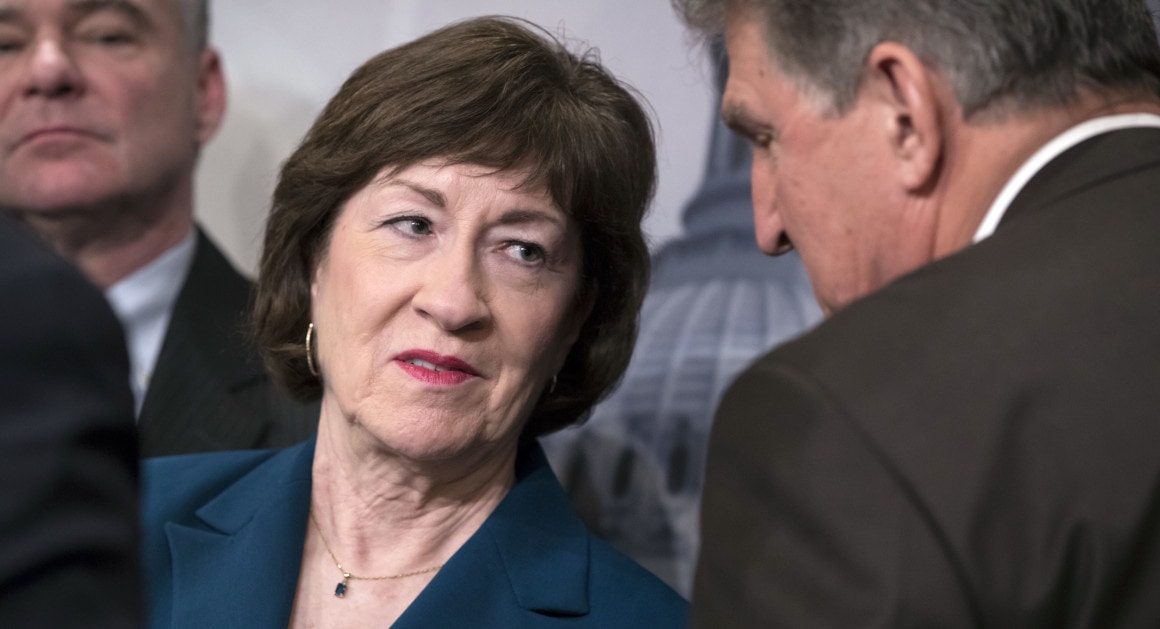 A bipartisan group of lawmakers is putting pressure on Vongressional leaders to accept a split-the-difference solution to the months-long impasse on COVID-19 relief in a last-gasp effort to ship overdue help to a hurting nation before Congress adjourns for the holidays.

The group includes Senate centrists such as Joe Manchin and Susan Collins, who hope to exert greater influence during the incoming Biden administration.

The proposal hit the scales at $908 billion, including $228 billion to extend and upgrade “paycheck protection” subsidies for businesses for a second round of relief to hard-hit businesses like restaurants. It would revive a special jobless benefit, but at a reduced level of $300 per week rather than the $600 benefit enacted in March. State and local governments would receive $160 billion, and there is also money for vaccines.

Earlier, larger versions of the proposal — a framework with only limited detail — were rejected by top leaders such as House Speaker Nancy Pelosi and Senate Majority Leader Mitch McConnell. But pressure is building as lawmakers face the prospect of heading home for Christmas and New Years without delivering aid to people in need.

It comes after a split-decision election delivered the White House to Democrats and gave Republicans down-ballot success. At less than $1 trillion, the plan is less costly than a proposal meshed together by McConnell this summer. He later abandoned that effort for a considerably less costly measure that failed to advance in two attempts this fall.

“It’s not a time for political brinksmanship,” Manchin said. “Emergency relief is needed now more than ever before. The people need to know that we are not going to leave until we get something accomplished.”

The pressure comes as Pelosi and Treasury Secretary Steven Mnuchin are set to reconvene their conversations about COVID relief and other end-of-session items, including a $1.4 trillion catchall government funding bill, as the Trump administration comes to a close. Mnuchin told reporters as he arrived at a Senate Banking Committee hearing to assess earlier COVID rescue efforts that he and Pelosi are focused primarily on the unfinished appropriations bills.

“I will be speaking to the speaker this afternoon. We’re going to talk about where we are on the appropriations issue. Keeping the government running, that is the first priority,” Mnuchin told reporters. “And I’m sure we’ll also be mentioning COVID Relief.”

Pelosi and Mnuchin grappled over a relief bill for weeks before the election, discussing legislation of up to $2 trillion, but Senate GOP conservatives opposed their efforts and Pelosi refused to yield on key points.

The centrist lawmakers, both moderates and conservatives, billed the proposal as a temporary patch to hold things over until next year. It contains $45 billion for transportation, including aid to transit systems and Amtrak, $82 billion to reopen schools and universities, funding for vaccines and health care providers, and money for food stamps, rental assistance, and the Postal Service.

“It would be stupidity on steroids if Congress left for Christmas without doing an interim package as a bridge” to the Biden administration, said Sen. Mark Warner, who was among the Democrats backing the proposal Tuesday.