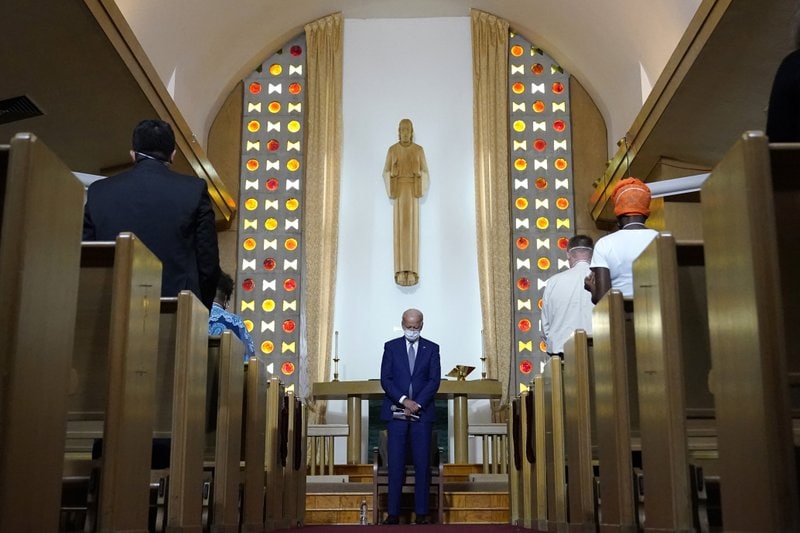 Conservative evangelical Christians have been some of Trump’s staunchest allies during his presidency.

Conservative evangelical Christians have proven some of Donald Trump’s staunchest allies during his presidency. As his administration draws to a close, some of those backers are approaching President-elect Joe Biden with skepticism, but not antagonism.

Christian conservatives who stood by Trump through moments of crisis and success are hardly comfortable with his loss, and several have yet to fully acknowledge Biden as the winner of the election amid ongoing, unfounded fraud claims by the president. But they’re largely not echoing the harsh tone Trump directed toward his Democratic rival during the campaign, when he claimed baselessly that Biden is “against God.”

Texas-based megachurch pastor Robert Jeffress, a stalwart evangelical booster of Trump, said Christians are obliged “to pray for what appears to be President-elect Biden. If he succeeds, all of America succeeds.”

Jeffress described himself as “deeply disappointed” by the apparent loss of a president he considers “a friend,” but added that he would respond to any outreach attempt by Biden, just as he did with Trump. The possibility that Biden could “be pulled away from extremist positions” held by other Democrats, Jeffress said, is “a plus not just for conservative Christians, but for all of America.”

It’s highly unlikely that Christian conservatives could develop a close relationship with Biden, whose support for abortion rights and stances on other issues stand in stark disagreement with the religious right. However, the lack of a combative tone from pro-Trump religious conservatives could create space for some common ground between the Catholic president-elect and other evangelicals who have not tied themselves as directly to Trump.

“If Joe Biden is the president, if that’s what it turns out to be, then we need to do everything we can to support him, where we can,” the Rev. Franklin Graham said in a recent interview.

Graham, who leads the Christian nonprofit founded by his late father, the Rev. Billy Graham, is a Trump supporter who offered prayers at his inauguration and this year’s Republican National Convention. But while he underscored that his opposition to abortion is one of several fronts where there could be no compromise, Graham said “we certainly can work with” Biden on other issues.

During the Obama administration, Graham attended a conversation Biden convened among faith-based advocates about gun legislation. The pastor also visited the White House in 2014 to discuss the Ebola crisis after a doctor at his global relief charity, Samaritan’s Purse, successfully fought the deadly disease.

Family Research Council president Tony Perkins, a longtime Trump partner, said that during Obama’s presidency, “I didn’t go to that end of Pennsylvania Avenue, because I was never invited.”

“If I were invited, certainly I would go, to have a conversation and represent the views our constituents have,” Perkins added in an interview. “But I don’t hold out hope that they’re going to invite those who hold to traditional, biblical views on life, religious freedom and human sexuality.”

Perkins said his socially conservative group would focus on working with the office of Senate Majority Leader Mitch McConnell whose party is poised to keep control of that chamber unless Democrats can win next month’s two runoffs in Georgia.

Conservative Christians have no shortage of potential looming disputes with the incoming administration. Biden is likely to reverse Trump’s ban on U.S. foreign aid for groups that support abortion, among other moves to shore up abortion rights, and he has pledged quick action on an LGBTQ rights measure that has drawn criticism from leading religious conservatives.

Marjorie Dannenfelser, president the Susan B. Anthony List and a Catholic outreach adviser to the Trump reelection campaign, said she saw “almost zero hope” of moving Biden on abortion, her group’s priority issue, and forecast “hand-to-hand combat until we take the presidency back.”

However, some groups such as Perkins’ may find occasional opportunities to work with the Biden administration even while remaining critical of it in their messaging to members and fundraising, according to evangelical writer and analyst Napp Nazworth.

“They’re going to be able to say, ‘Please support us because your religious freedom is in danger,’” said Nazworth, who left the Christian Post last year after it published a pro-Trump editorial.

Meanwhile, evangelicals outside those most closely associated with Trump already are identifying commonalities where they could partner with Biden.

One is his plan to raise the annual refugee admissions ceiling to 125,000, a vow he reiterated recently at an event hosted by Jesuit Refugee Services. The Trump administration had slashed the refugee target to historic lows.

Bult said his group worked with the Trump administration but “we were never shy about criticizing” moves it disagreed with, and “we’ll treat the Biden administration the same way.”

“We have principles that we think should be appealing to all Americans,” Carey said, “and we’d like to be a constructive force for the common good.”

nextAt Georgia Senate rally, Donald Trump can help his party or himself