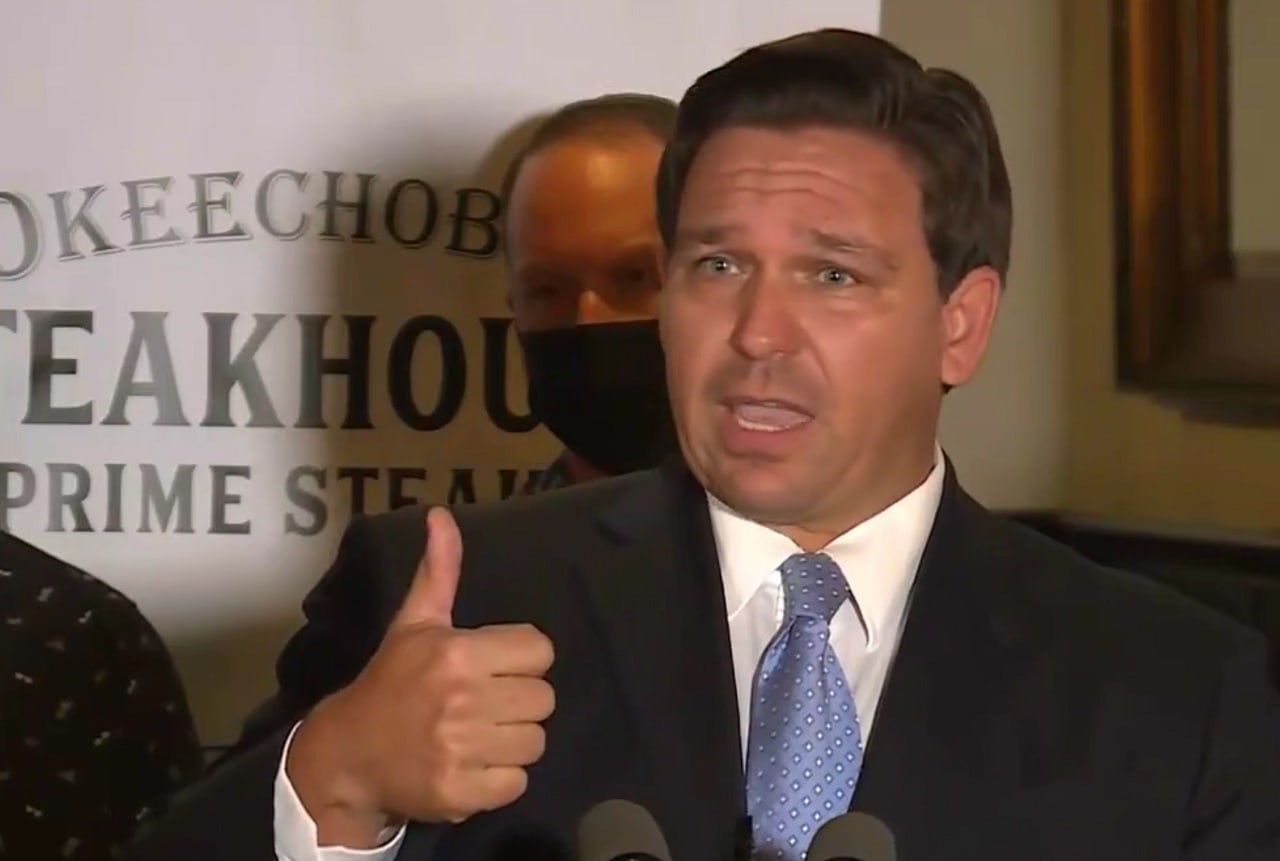 Restaurants have been fully open since September.

Despite facing pressure this month to take a step back on Florida’s pandemic reopening timeline, Gov. Ron DeSantis reassured restaurants Tuesday that he won’t shut them down.

On Sunday, news broke that a White House Coronavirus Task Force report for Florida recommended stricter measures for stopping the virus including mask wearing at all times in public, increased physical distancing by reducing capacity or closing indoor spaces at restaurants and bars and limiting gatherings outside of immediate households. States like California are reimposing restrictions in the face of rising cases, but Florida has waitresses, cooks and family-0wned businesses covered, the Governor said.

“We just want to send the message, some may want to shut you down, we want to pull you up,” he said during a press conference with several restaurant industry workers.

“You’re working folks who are working hard to make a living, and you can take it to the bank in the state of Florida, you’re going to have that right defended by the Governor.”

Since September, Florida has been in reopening Phase Three, which allows all businesses to open. The order lifted all COVID-19 state-level restrictions and preempted local governments’ abilities to close businesses and assess fines on individuals.

“If a local leader wants to put them out of work, you’re damned right I’m hobbling them from doing that,” DeSantis said Tuesday. “If they want to shut down businesses, I’m going to stand in the way. I’m going to stand with these folks here because they have a right to make a living and I don’t think government has a right to put these people out of work and not let them put food on the table for their family.”

Businesses put every effort into protecting customers and their staff, the Governor noted, or guests won’t visit.

State health officials reported 9,411 new cases and 94 deaths in Tuesday’s pandemic update. And with the holiday season, experts expect cases to go on the rise again.

“The vast, vast majority of infections are occurring in people’s homes, particularly if you have people getting together,” DeSantis said. “Closing a restaurant for indoor dining is going to lead to more people doing that in private homes anyways.”

Instead, government should inform people about situations with higher risk and let individuals make their own decisions. Mandates and shutdowns haven’t worked for other states, he noted.

Florida is among 10 states with the lowest new infections per capita, according to the task force report.

“If the mandate was so important, Florida would be higher than all of those states,” DeSantis said.

“Rankings are almost irrelevant as the entire country is surging,” the task force report said.

The Dec. 6 report obtained by the Center for Public Integrity also urged leaders to begin warning about the risks of gathering during the December holiday season.

The White House Coronavirus Task Force is chaired by Vice President Mike Pence, and Dr. Deborah Birx serves as its response coordinator. The task force’s reports are sent to governors across the U.S.

Last week, the Orlando Sentinel and the South Florida Sun Sentinel, based in Palm Beach County, sued DeSantis’ administration for failing to make public the weekly reports about coronavirus conditions in the Sunshine State. The Governor held his Tuesday press conference at Okeechobee Steakhouse in West Palm Beach.

The lawsuit said the DeSantis administration is violating the Public Records Act by refusing to release the reports, which provide recommendations and snapshots of virus conditions state by state. The lawsuit filed last week in state court in Tallahassee seeks the immediate release of requested and future reports.

“The state has given us no explanation as to why this crucial health information should be withheld,” said Julie Anderson, the editor in chief of the Orlando Sentinel and the South Florida Sun Sentinel. “We had no choice but to ask a court to intervene to uphold the public records law.”

The White House has indicated these reports should be “widely” shared, including with the media, according to the newspapers’ lawsuit, as reported by The Associated Press.