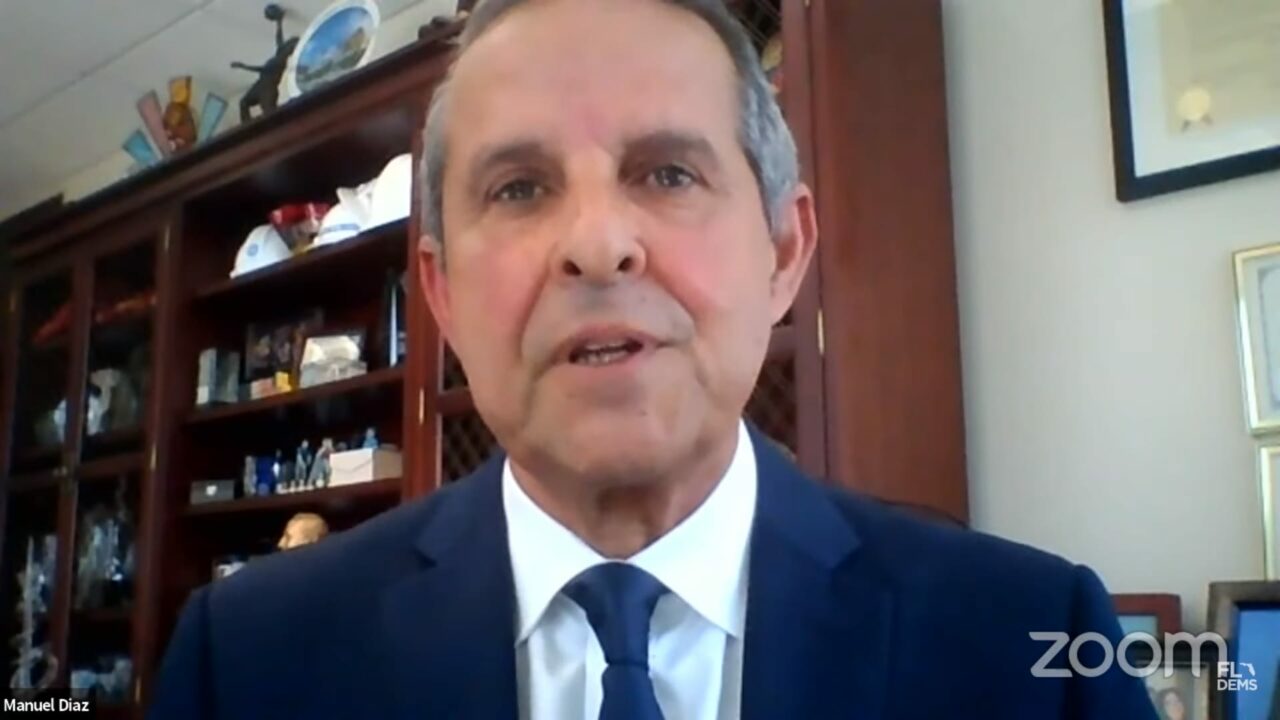 Former Miami Mayor Manny Diaz has been elected the new chair of the Florida Democratic Party.

Diaz, who ran a high-profile, fully staffed campaign and rounded up scores of endorsements from elected Democrats and others, won on the first ballot Saturday afternoon, with 54% of the votes, in the Democrats’ complex system of distributing votes based on the populations of counties.

“Now fellow Democrats, our real work begins. It will not be easy. I pledge to all listening that from this moment forward, I will spend every moment for these next four years working tirelessly together with all of you to focus on our greatest and most important priority, to elect Democrats to office up and down our state and improve the lives of all Floridians,” Diaz said in accepting the office.

Diaz’s candidacy and his overwhelming campaign had drawn some sharp criticisms from within the party, from certain members who were concerned about his record as Mayor, about his brief exodus from the Democratic Party 21 years ago in protest of the Clinton administration, his subsequent support for some Republicans running for office, and concerns that he might not be able to represent the progressive views of many Democrats, or adequately represent its diversity.

Townsend and Chestnut had run in part as alternatives to Diaz and drew support from some Democrats who wanted to stop him. They each took shots at Diaz in their nomination speeches, though not by name.

Townsend reminded Democratic voters that she has always been a Democrat and never supported Republicans; while Chestnut pointed out that she is an African American woman and “our time has come.”

In the end, Diaz’s support proved overwhelming. Townsend quickly congratulated him and offered him her full support.

Cuba-born Diaz, 66, was Mayor of Miami from 2001 to 2009. His son Manuel Alberto “Manny” Diaz II is the head coach of the University of Miami Hurricanes football team.

He takes over a party with numerous problems.

Florida Democrats suffered widespread election disappointments in the November General Election, as Republicans took Florida’s 29 Electoral College Votes for Donald Trump and made gains in both the Florida Senate and the Florida House. That followed a disappointing showing in the 2018 election when the party lost its U.S. Senate seat and saw a gubernatorial election they thought they could win slip away.

The party suffered an embarrassment in the spring when it was revealed it had improperly sought and received a federal Paycheck Protection Program loan of more than $800,000. The party returned the money but did not offer any accounting. Republicans blasted them over it in the fall election campaigns.

In addition, the party’s federal entity, the Democratic Executive Committee of Florida, run by the same leadership, showed financial accounting problems all year and came out of the November election broke and in debt, while the Republican Party of Florida entered the next cycle with millions of dollars in the bank for federal election campaigns.

“Our Florida Democratic Party is at a crossroads,” Diaz said in his nomination speech. “While Democrats all over the nation make gains, we continue to lose ground. We continue to lose elections. And more importantly, when we lose, all Floridians suffer, especially the poor and working people, our Black, Hispanic, Asian, and LGBTQ communities. And our environment suffers. We cannot afford to fail them.”

“Now we must look past what divides us and build on what unites us,” Diaz continued. “Today and in the years to come, the eyes of many in this country will be on us. Let us show them that we will do everything to turn Florida blue. Let us show them that we are proud to be part of this vibrant party. This is the future I need you to help me build, the legacy we must leave for future generations.”

He called for the Democrats to be “one party with one future.”

nextLawmakers who voted against Joe Biden are denounced back home