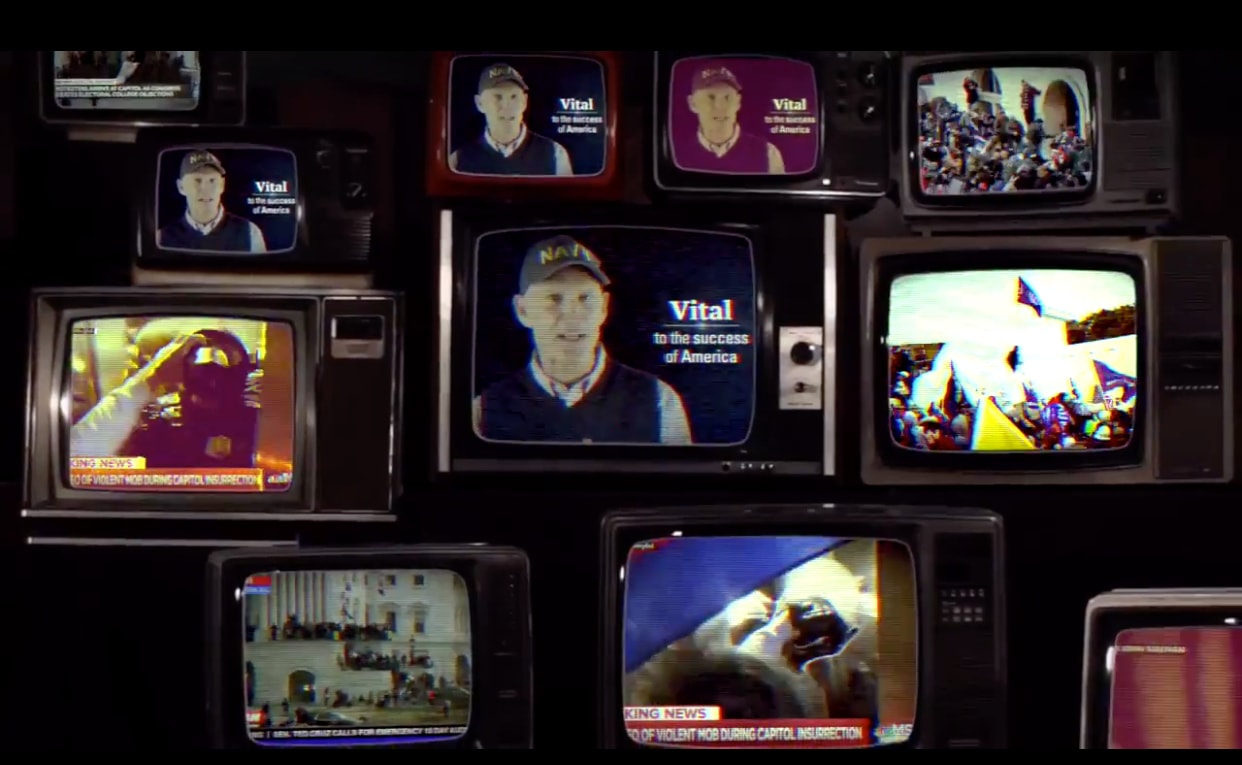 The Lincoln Project, that group of Never Trumpers that has long since broadened its critique into the foibles of the President’s allies and enablers, is targeting a Florida Senator in its latest piece of abrasive creative.

Running just over a minute long, the spot begins with U.S. Sen. Rick Scott appealing to donors in his efforts to raise a “gazillion dollars” in his new role as chairman of the National Republican Senatorial Committee. Scott’s iconic image, complete with the ready-for-anything Navy cap, beams from a bank of old-style tube television sets.

As Scott continues to soldier through well-worn talking points about “stopping the march of socialism,” one by one the television images change. Gone are the repetitions of the Senator’s reassuring countenance, replaced instead by images of Capitol violence and pro-Donald Trump marauders defiling the cathedral of American democracy.

The insurrectionists, described as peaceful protesters in some quarters, wreaked havoc and derailed the process. And their guttural calls drown out the Senator’s polished oratory here, too. Eventually a robust “Bull$h!t” chant emerges in stereo sound, with televisions flashing the Republican elephant and the closing accusation: “This is your coup.”

Sen. Rick Scott, chairman of the @NRSC, is asking for help rebuilding the Republican Party.

Scott, in voting to invalidate Pennsylvania’s electors, has become a lightning rod for criticism, with this ad being the latest reminder.

New York Times reporter Maggie Haberman was first to report of “very real concern” among those involved in Senate campaigns that Scott is toxic because he bucked a strong bipartisan consensus and gave the insurgents what they wanted. He was the only member of leadership to vote against the certification of all duly elected Joe Biden electors.

Scott’s team downplays concern about the Senator’s viability in helping Senate Republicans restore a brand tarnished by the dictatorial denouement of the Trump era, with the Grand Old Party having squandered its majority, leaving Republicans ill-positioned for the next two years.

“Chairman Scott has been having great conversations with donors, activists, and Republican senators over the last few days. Everyone is focused on the challenge ahead and excited to get to work to win back the Senate majority,” spokesman Chris Hartline told The New American.

Scott has urged people to “lower the rhetoric,” meanwhile, but the Lincoln Project shot suggests that the Senator and the GOP will still face blowback from the events of Jan. 6.