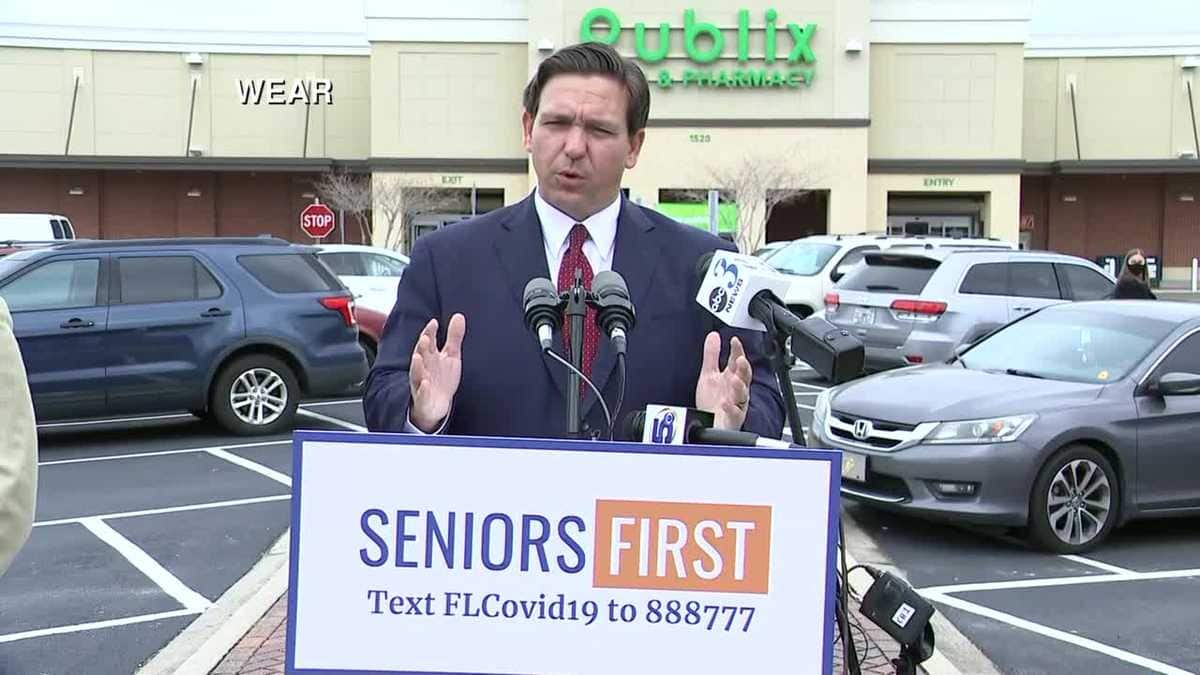 242 of Florida's 750 Publix locations will offer shots by the week's end.

Florida is expanding its vaccine partnership with Publix into South Florida with 76 new partnered locations plus more in Southwest Florida.

Beginning Thursday, Publix pharmacies will offer shots for people at seven sites in Martin County, two in Monroe County and all 67 sites in Palm Beach County. Seven more sites in Charlotte County, 22 in Brevard County plus all 32 Publix locations in Lee County raises the count of partnered sites to 242 overall across 18 counties.

At the new vaccination sites, reservations open Wednesday for appointments that begin Thursday. Signups are available online at www.publix.com/covid-vaccine.

Until the latest round of vaccine sites, the only Publix locations in the immunization effort were in medium-sized counties with high senior populations. Palm Beach will be the first large county to offer vaccines at Publix pharmacies.

Speaking from a Publix parking lot in Jupiter on Tuesday, Gov. Ron DeSantis said the response from seniors has been “uniformly positive.”

An estimated 90% of seniors in Palm Beach County live within a mile of a Publix store.

“It’s convenient,” he told reporters. “Not every senior’s going to drive halfway across town or halfway across a county to go to a drive-thru site. They need something that is more convenient.”

About 750 Publix locations exist in Florida.

“South Florida is going to have a lot of Publixes. Of course, we will do more when we get more vaccine in,” the Governor said.

In addition to convenience, Publix is accustomed to a high volume of web traffic and can throttle access as necessary to keep its signup page online.

More than 654,000 people 65 years old and older have received at least their first dose in Florida as of early Monday, which the Governor later in Cape Coral called the best in the nation “by a country mile.” Fifteen percent of Florida’s seniors have received a vaccine, a distinction DeSantis says is shared only by West Virginia.

Overall, more than 1 million people have received a shot, including 93,258 that have had their booster, too. DeSantis said that’s an underestimate given the lag in reporting.

The public’s frustrations over what many perceive as a slow rollout has plagued officials in Florida and other states. The Governor credited hospitals, county health officials and Publix for the states’ volume of shots given so far, rejecting criticism about the rollout and attributing slowdowns to a lack of access.

Florida has the capacity to offer more shots, DeSantis said, and he has asked the federal government for more doses. He doubled the state’s initial request of 250,000 for this week, but the state received 270,000 first-round shots this week.

Surgeon General Scott Rivkees acquiesced to Democratic Sen. Jason Pizzo‘s estimate Thursday that it could take 9 weeks at the current pace for the state to finish vaccinating its 65 and older population that wants a shot. Quicker production, including with the possibility of new formulae next month from Johnson & Johnson or AstraZeneca could shorten that timeline.

“I think it depends on how much vaccine we get,” DeSantis said Tuesday.

During his third Publix stop of the day, in Rockledge, the Governor hedged on the “ray of hope,” as Rivkees put it Wednesday, more vaccines would bring. Johnson & Johnson, despite being a single-dose vaccine that federal officials could even approve for minors, might not provide the immediate relief Florida needs.

“I think we had really been anticipating really widespread production right off the bat,” DeSantis said. “I’m not sure that that’s necessarily the case. I think that the jury’s still out on that.”

The partnership with Publix began at 22 sites in Citrus, Hernando and Marion counties. That pilot program “went swimmingly,” the Governor said.

Last week, Publix made shots available in the Panhandle, Northeast Florida and Southwest Florida. Each location can offer between 100 and 125 shots per day.

“You go in, they run it like clockwork,” DeSantis added. “You have to be observed for 15 minutes after the shot, but then you’re on your way.”

Florida has also faced scrutiny for reports of “vaccine tourism,” people traveling from out of state or out of the country to get vaccinated in the Sunshine State. DeSantis said there have been examples of hospitals vaccinating people from Latin America or elsewhere.

“We’re not doing vaccine tourism, but I do think it does show that folks understand that when the experts were saying to do the workers first, Florida put seniors first, and now people are starting to follow what we’re doing,” he said.

The Governor may ask the Agency for Health Care Administration to issue a memo discouraging vaccinating non-residents. However, snowbirds who live in Florida half the year, who pay taxes and use hospitals, get a pass.

Publix’s locations are reserved for county residents only.