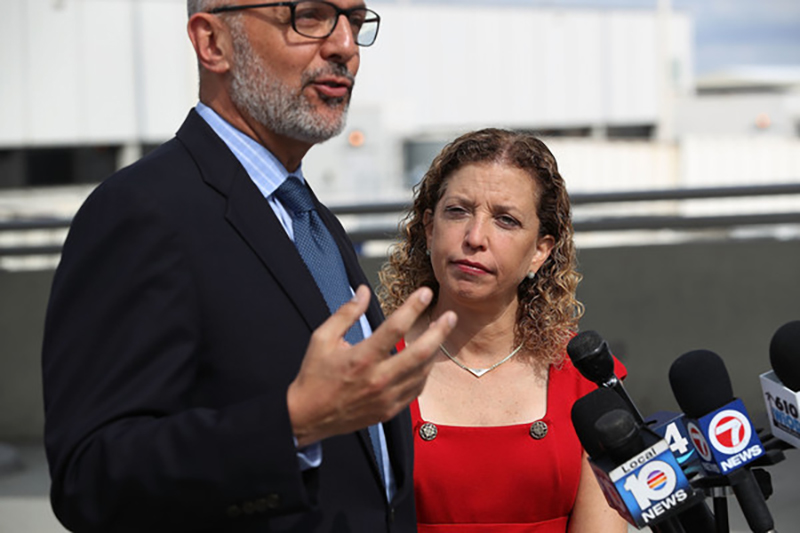 Democratic Reps. Ted Deutch and Debbie Wasserman Schultz say they’ll back efforts in the House to punish or expel Republican Rep. Marjorie Taylor Greene of Georgia over her violent remarks and conspiracy-laden past.

Video uncovered Wednesday shows Greene haranguing Parkland survivor David Hogg over his gun control advocacy, pelting him with questions while following him before calling him a coward. Greene has also backed a lie that the 2018 mass shooting at Marjory Stoneman Douglas High School that killed 17 people was a planned, “false flag” event.

Greene also backs the QAnon theory, supported — before later retracting — the conspiracy theory that 9/11 was an inside job, and voiced support for executing elected Democratic officials.

“Many members are afraid to be in the building with her,” said Democratic Rep. Lois Frankel Thursday, in separate remarks during a Zoom call on Florida’s vaccine rollout.

Though many of those remarks were uncovered recently, they were largely made before Greene ran for her House seat representing Georgia. Still, Democratic Rep. Jimmy Gomez is now seeking to expel Greene from the House for those past comments.

Democrats are also outraged that GOP leadership allowed Greene a committee assignment. On Thursday, Deutch — whose district covers Parkland, the site of the 2018 attack — said he would support removing Greene from that committee and from Congress altogether.

“I don’t believe that she should have the platform of the Education and Labor Committee,” Deutch said, citing her “disgusting” treatment of Parkland families.

“Republican Leader Kevin McCarthy should take her off of the House Education and Labor Committee. And do I also agree that she doesn’t belong in the United States House of Representatives? Absolutely.”

“As soon as possible, which I believe will be [Friday] morning, I’ll be introducing a privileged resolution — just in case Kevin McCarthy, as expected, doesn’t do the right thing — to remove her from her committee assignments,” Wasserman Schultz said.

Deutch said he would support that resolution.

“Think for a moment what it says if the leadership of the Republican Party chooses, as they have, to take a QAnon supporting, conspiracy theory-advancing person, who personally attacked the survivors of the Stoneman Douglas shooting, and rewards that person by giving her a position to the important Education Committee, whose first priority ought to be to help keep our kids safe,” Deutch said.

Frankel didn’t directly comment on the proposal, and Wasserman Schultz didn’t say whether she would back full expulsion. Thursday afternoon, Democratic Rep. Frederica Wilson added on Twitter that she would back a move to revoke Greene’s committee assignment.

“She would not fit into the bipartisan climate that we have worked so hard to establish and would only cause grief to the committee and the constituents we aim to serve,” Wilson said.

Greene has refused to apologize for her remarks, instead blaming media outlets for reporting on her own words.