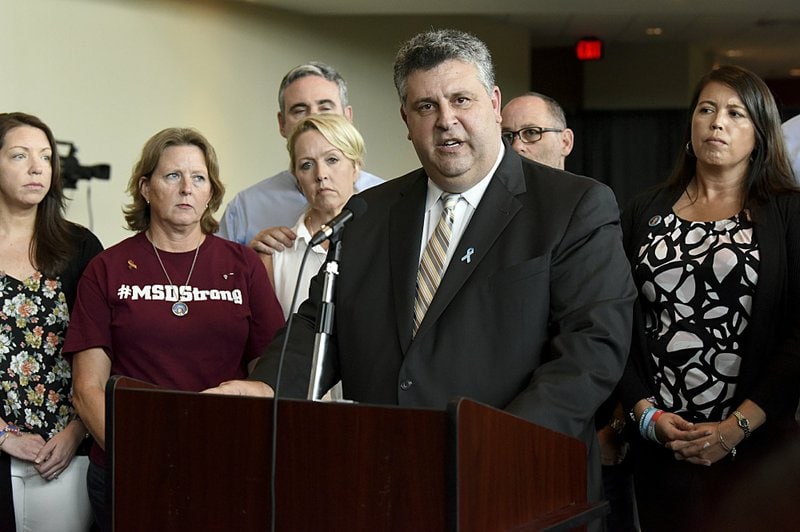 It's been three years since a lone gunman claimed the lives of 17 students and faculty in Parkland.

Sunday marks the three-year anniversary of the attack where Tony Monalto’s daughter, Gina, was killed at Stoneman Douglas High School. But with more than 1,000 days elapsing since that tragic attack, Montalto is still working to fix the problems leading up to that day, as well as look forward to new potential threats.

“We’re seeing more schools throughout the nation begin to open,” Montalto said of the ongoing trek toward normalcy amid the COVID-19 pandemic.

“As they move forward, we need all administrators, teachers, mental health professionals and law enforcement officers on our campuses to be alert for students that are having problems readjusting to going to school. Not every child has been in a favorable environment during much of the COVID quarantine. We need to be on the lookout for kids that are stressed and get them the help they need.”

Montalto is concerned one of those students could add to the nation’s heartbreaking list of school shootings.

The 2018 Parkland attack holds a prominent place on that list — not simply due to the 17 killed and 17 injured, but because of the activism that grew out of the attack.

Stand With Parkland is an organization launched by families affected by that attack. Montalto leads the group, serving as its president. Other survivors have taken on different advocacy roles, more focused on gun regulations. Some parents have even secured positions in state and local government.

The persistent advocacy work by the Parkland families has led to a direct line with the nascent Joe Biden administration. Last week, Fred Guttenberg — whose 14-year-old daughter, Jaime, died in the 2018 attack — thanked U.N. Ambassador Susan Rice for agreeing early on to speak with several Parkland families. Montalto was on that call as well, as were White House Senior Advisor Cedric Richmond and other members of Biden’s team.

“Thank you [Fred Guttenberg] and all the Parkland families for sharing your stories, your heroic activism, and relentless commitment to making our schools and communities safer,” Rice wrote following the meeting. “You will have a partner in the Biden Administration.”

Thank you @fred_guttenberg and all the Parkland families for sharing your stories, your heroic activism, and relentless commitment to making our schools and communities safer. You will have a partner in the Biden Administration. https://t.co/DUxooRv72e

Montalto spoke with Florida Politics about his group’s years-long effort to work with legislators to move his group’s priorities forward. He still sees the 2018 Marjory Stoneman Douglas High School Public Safety Act as the biggest step so far — though just a first step — in improving safety measures throughout the state.

That bill set up the state’s Office of Safe Schools, instituted the Guardian training program to enhance school security and installed a red flag law, allowing officials to confiscate weapons from individuals posing a danger to themselves or others.

But Stand With Parkland and other survivors of that attack have not been content with passing one large piece of legislation and walking away. Ahead of the 2021 Legislative Session, Montalto still has major goals at the state and federal level.

With Florida’s 2021 Legislative Session beginning in March, Montalto is also eyeing additional state reforms. On Friday, Sen. Shevrin Jones and Rep. Dan Daley said they would push legislation to ensure parents are notified of potential school threats in a timely manner. Stand With Parkland is backing that bill, motivated from findings that the Parkland shooter exhibited warning signs for years before attacking Stoneman Douglas High School in 2018.

“Every parent wants to protect their child,” Montalto said. “Every family needs to know the threats their kids are under so that we can make good choices about how best to protect our children.”

Returning to the topic of the pandemic, Montalto pointed to safety protocols installed for on-campus instruction. Florida schools are notifying parents if their child has come into contact with another student who tested positive for the coronavirus.

“It’s similar to what we’re doing now,” Montalto said of his push to inform families about violent threats on campus. “It just adds another metric that must be reported to parents so that parents can make a good decision.”

Montalto also says he wants to see the Alyssa’s Alert system built out properly after lawmakers funded the initiative in 2020. The alert system is named after Alyssa Alhadeff, one of 17 people murdered during mass shooting.

One of his biggest priorities for 2021 is bringing back a major follow-up school safety bill, which failed at the last minute during last year’s Legislative Session. That measure would have included updates to the Guardian program, required schools to establish family reunification policies in the event of an attack, and instituted several other reforms.

“We’re hopeful to see that bigger package be reintroduced this year,” Montalto said.

Montalto also commented on the ongoing delays in the Parkland shooter’s trial, which have been exacerbated due to a court slowdown caused by the COVID-19 outbreak. While the shooter’s attorneys have said he would plead guilty in exchange for a life sentence, prosecutors have pushed for the death penalty.

Montalto said that while he’s understandably frustrated with the slow-moving justice system, he’s willing to wait to see the shooter face a jury.

“This tragedy was certainly terrible for my family and for the other 16 families that lost someone. But we also had 17 wounded. We have an entire community that was traumatized by this attack on a school,” Montalto said.

“I would think everyone would want to look at the broader picture at how bad this could have been and want to see the individual responsible punished to the fullest extent of the law to help prevent and discourage others from attacking our schools.”

Stand With Parkland and other advocates affected by the shooting have often found willing partners at the state and local level during the fight for reform. Though the issue of gun reform remains a lightning rod, that original 2018 measure installed a red flag provision into state law. That shift served as a major win for gun control advocates working with a GOP-controlled state government rarely amenable to such moves.

To honor the victims of the attack, Gov. Ron DeSantis has ordered state flags to be flown at half staff and called for a moment of silence Sunday afternoon. Sen. Lauren Book, who served on the Marjory Stoneman Douglas High School Public Safety Commission set up after the attack, has introduced a resolution making Feb. 14 a permanent day of remembrance.

And U.S. Rep. Ted Deutch, whose district spans Parkland, recently said “not a single day has gone by” without him remembering that attack.

“The MSD flag hanging on my office wall and the list of names I keep in my wallet are my daily reminder of the individuals we lost on that day. Together as a community, and on our own in our own way, we have grieved for each of them and will strive to keep alive the memory of who they were — their hobbies, their passions, their character,” Deutch said in a statement on the attacks’ three-year anniversary.

“Healing is a long process, one that never truly ends but rather evolves. We cannot fully understand the pain felt on this day by the survivors and families of the victims. But we must still uphold our responsibility as members of this community to remember those who died three years ago, to celebrate the lives they lived, and to offer our support to anyone struggling on this day.”

Montalto is one of those affected, still processing a tragedy that shook South Florida and the nation.

“What we try and do is spend time as a family thinking about our daughter and try to not just dwell on how much we miss her — although that is impossible to avoid — but we try to think of the memories and the fun times that we had together,” Montalto said of the harrowing anniversary, which falls on Valentine’s Day.

“I would just encourage everybody this weekend to pause — to hug their loved ones a little longer, a little more often — and dedicate yourself to living your life to the fullest every day. That doesn’t mean being reckless. It just means enjoying what you can.”

previousWinner and Loser of the Week in Florida politics — Week of February 7, 2021