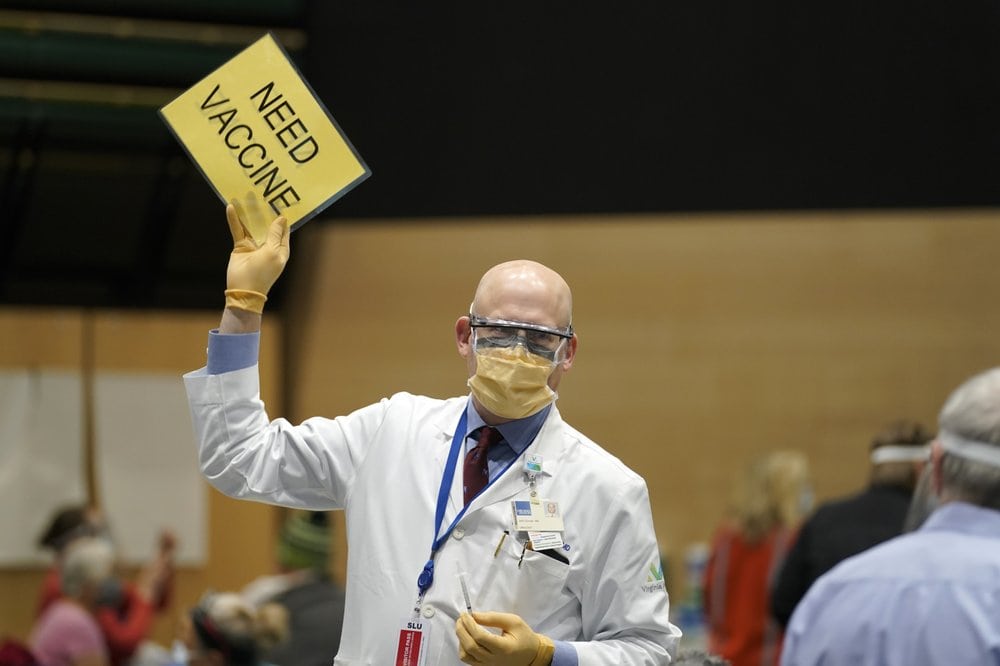 So far, just over 46 million doses have been administered.

The Biden administration’s plan to open 100 vaccination sites by the end of the month was initially embraced by governors and health officials, who considered it a much needed lifeline to get more Americans inoculated against the coronavirus.

But reality has quickly set in: Some are hesitating to take the offer, at least for now, saying they don’t need more places to administer doses. They just need more doses.

Eager to protect more people against the coronavirus, health officials in Oklahoma jumped at the chance to add large, federally supported vaccination sites. They wanted them in Oklahoma City, Tulsa and a third, mid-size city, Lawton, thinking the extra help would allow them to send more doses to smaller communities that had yet to benefit.

“We felt like if we could get them in the metro areas, what that would allow us to do is … free up a lot of our other resources to do more targeted vaccinations in underserved areas,” said state Deputy Health Commissioner Keith Reed.

Those plans are now on hold after the state learned that the sites would not come with additional vaccines. Instead, the doses would have to be pulled from the state’s existing allocation, and the three sites alone might have used more than half of Oklahoma’s vaccine supply.

“We’re not prepared to pull the trigger on it unless it comes with vaccine,” Reed said.

The Biden administration’s virus response plan calls for opening 100 federally supported vaccination sites by the end of February. It is preparing to mobilize thousands of staffers and contractors from the Federal Emergency Management Agency, the Department of Defense and other federal agencies. They already have been providing money, staffing or logistical support for many state and local vaccination efforts, but President Joe Biden’s plan specifically refers to launching new sites to help get vaccines to underserved communities.

White House chief of staff Ron Klain touted the initiative earlier this month after the initial sites were announced in Los Angeles and Oakland. Since then, the administration has announced a handful of others.

“We just opened our first two federal vaccination centers, in California this week,” Klain told NBC News. “We’re on our way to 100 of them by the end of this month.”

The White House told The Associated Press it could not provide a tally showing how many of the 100 new sites had been announced so far, but said it’s confident it will hit its goal by the end of the month.

Getting Americans vaccinated will be key to suppressing the virus and fully reopening the economy. So far, just over 46 million doses have been administered and the administration has pledged to ramp up daily doses to 1.5 million. Since the pandemic began nearly a year ago, more than 27 million Americans have been infected and the country is on the cusp of reaching 500,000 deaths.

Lack of adequate supplies across the country has led to cancelled appointments, shuttered mega sites and the halting of first doses to ensure that people can get their second shots. Governors have said consistently over the past two weeks that their biggest need isn’t a new distribution system, it’s just getting more vaccine.

“It’s not necessary in Florida,” Republican Gov. Ron DeSantis said of the large federally supported sites. “I would take all that energy and I would put that toward more supply of the vaccine.”

Hesitancy over adding more vaccination centers without a significant increase in vaccines is coming from some of Biden’s biggest supporters. That includes some Democratic governors who roundly criticized the Trump administration’s decision to delegate much of the pandemic response to the states.

“Up until now, we’ve been under the impression that these sites do not come with their own supply of vaccine — which is the principal thing we need more of, rather than more ways to distribute what we already have,” said Tara Lee, spokeswoman for Washington Gov. Jay Inslee. “If that changes and allocations are coming with federal sites, that would change our calculations.”

Wisconsin health department spokeswoman Elizabeth Goodsitt said the agency is exploring how it might use the vaccination sites proposed by the White House but added, “Ultimately, we will need more vaccine in the state to support” them.

“The moment that FEMA says we will supply our centers with additional vaccine, we want one,” Beshear said.

Jeff Zients, the White House COVID-19 coordinator, told governors on a conference call this week that the administration is continuing to try to get more vaccines to the states. By next week, states will be sent a total of 11 million doses, an increase of 500,000 compared with this week.

That’s not enough to convince some governors to invite the federal government. The halting effort in part reflects a seismic shift in the way the pandemic is being handled. The Trump administration left many decisions up to the states, but Biden has likened the pandemic response to a war effort requiring a much greater federal role.

While that approach is welcome in some places, governors who are used to calling the shots want to be sure their states don’t lose any flexibility in how they manage vaccine distribution.

Mixed messages also haven’t helped. Officials in New York and Texas said the federal government told them that the vaccines distributed in the federal sites there would not count against the states’ allocations. That’s different from what state officials elsewhere have been told.

An assurance like that would allow Oklahoma to reconsider its decision to halt plans for the three federally supported sites. Tulsa City-County Health Department Director Bruce Dart said the state did the right thing when it learned the sites would rely on the state’s own vaccine allocation.

He said the state continues to discuss the program’s future with the federal government. If it could guarantee the doses would come from a separate federal supply, Dart said, “We’d be the first ones to say, ‘Come on down.’”

previousRick Scott rails that travel ban would be 'attack' on Florida