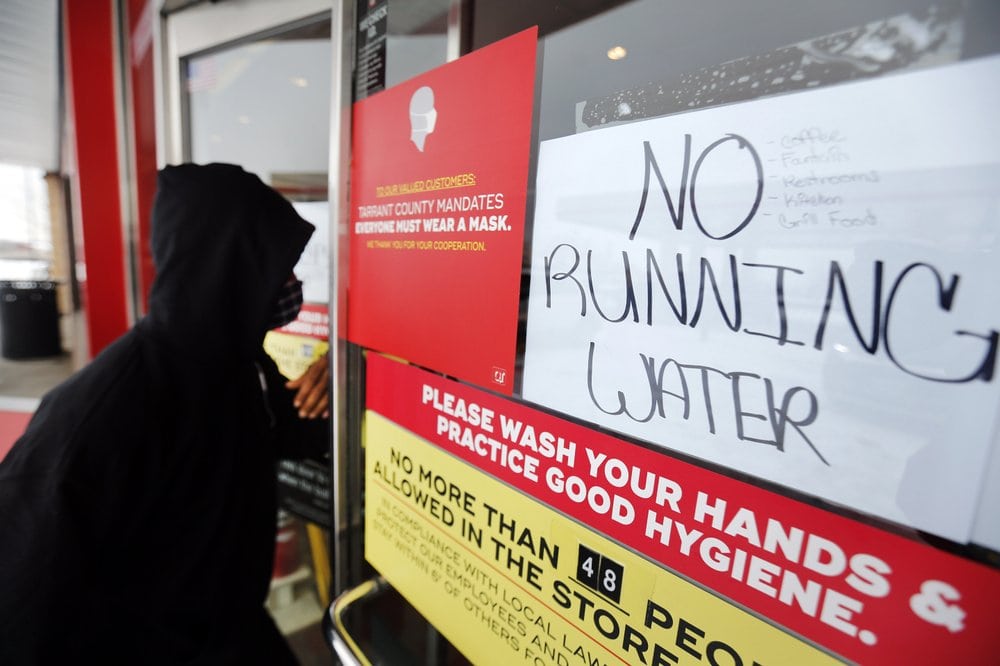 The storms and outages that have hit a big swath of the U.S. over the past several days have added a whole new layer of complexity.

Ashley Archer, a pregnant, 33-year-old Texas financial adviser, and her husband have been cautious about the coronavirus. They work from home, go out mostly just to get groceries and wear masks whenever they are in public.

But when a friend lost power amid the winter storms that have left millions of Texans without heat in freezing temperatures, the couple had to make a decision: Should they take on additional risk to help someone in need?

Archer said they didn’t hesitate. They took her husband’s best friend into their suburban Dallas home.

“He’s like family,” she said. “We weren’t going to let him freeze at his place. We figured, ‘OK, we’re willing to accept a little bit of risk because you’re not in our little pandemic group.’”

Weighing the risks in the pandemic era is fraught enough. But the storms and outages that have hit a big swath of the U.S. over the past several days have added a whole new layer of complexity.

Do we open doors to the neighbors? Should we stay in a hotel or go to a shelter? And what to do about hand-washing, the most basic of precautions, when there is no running water?

The last few months have been challenging enough for Jonathan Callahan. He lost his job cleaning mail trucks in Jackson, Mississippi, and soon found himself homeless, sleeping in an abandoned church at night. Then the storm hit Mississippi this week, bringing bouts of snow and freezing cold.

Callahan, 40, was one of 14 people staying at a warming shelter at a community center in Jackson, with cots spread around the gym. He said the space has been comfortable, meals have been provided, and he and some others played a game of pickup basketball, which “warmed us right up.”

He said he felt comfortable with the coronavirus precautions; he and most everyone else were wearing masks and there was room for distancing.

Public health experts say that crowding people into shelters can contribute to the spread of COVID-19, but that there are ways to lower the risks, through masks and distancing.

“The ethics of the situation are simple enough,” said Dr. Stefan Kertesz, a University of Alabama at Birmingham professor of medicine and a homeless health researcher who runs a clinic for homeless veterans. “We can’t protect people tomorrow if they die today. Warming stations are needed.”

The storms that have disrupted social distancing precautions and thrown people from different households together have also undermined the nation’s vaccination drive, with tens of thousands of vaccine doses stranded and inoculations canceled. Concern is mounting in some places.

Massachusetts Gov. Charlie Baker said Thursday he is thinking of sending the National Guard into the South to bring back held-up shipments of vaccine earmarked for the state. He said the state can’t afford to go a week without getting any new doses.

And North Carolina vaccine providers have yet to receive tens of thousands of doses the federal government was set to deliver this week, state officials said.

Like Archer, Ella Ewart-Pierce, a public health analyst, said her family has been especially cautious about the coronavirus because her husband is in a vulnerable group. The Dallas couple has been working from home, avoiding places where people gather and getting groceries delivered.

But when they lost power, the risk calculation shifted. Ewart-Pierce said they decided to take their young kids to a hotel Monday after their home became so cold they had to shut off the water to keep the pipes from bursting.

“It was 13 degrees outside and our house was 38 degrees inside,” Ewart-Pierce said. “The kids were already crying because they were cold even though they were wearing all their clothes.”

When the family arrived at the hotel they plan to stay at until Sunday, “it was a scene,” said Ewart-Pierce.

“There was one lady trying to figure out where to buy formula for her baby. There are families and a lady in a wheelchair with a blanket. It’s a hotel that has pets, so there were dogs,” she said.

They’re taking precautions while there, she said, including wearing two face masks each and keeping their distance from other people. With the hotel’s restaurant open but dining in prohibited, they’re eating on the floor of their room.

In Austin, Anissa Ryland also was forced to move her family to a hotel. She, her husband and their five children lost power at their 115-year-old home around 2 a.m. Monday and left following a frigid night.

When they returned Tuesday to pick up supplies, the thermostat read just 7 degrees above freezing, and icicles had begun to form.

Under normal circumstances, the family could stay with neighbors or family, but the pandemic has made that harder. For one thing, one of her children has a compromised immune system, she said.

“You have to weigh the risks and say, ‘Danger now versus a theoretical risk,’” Ryland said. “How do you do that? It’s a hard discussion.”

Despite the weather challenges, people still need to try to take precautions amid the coronavirus fatigue they have endured and continue wearing masks while trying to social distance, said Roopa Kalyanaraman Marcello, a New York-based public health expert who has worked in the field for two decades.

“If you have no heat in your home and it’s 40 degrees in your home, in those situations, it is not necessarily safe for you to be in your own home so you may be forced to go to someone else’s home,” she said. “I think it’s challenging, it’s a balance. I think if people are gathering with people they know are vaccinated, there may be less of a risk there.”

previousSuperintendents weigh in on 'missing students'