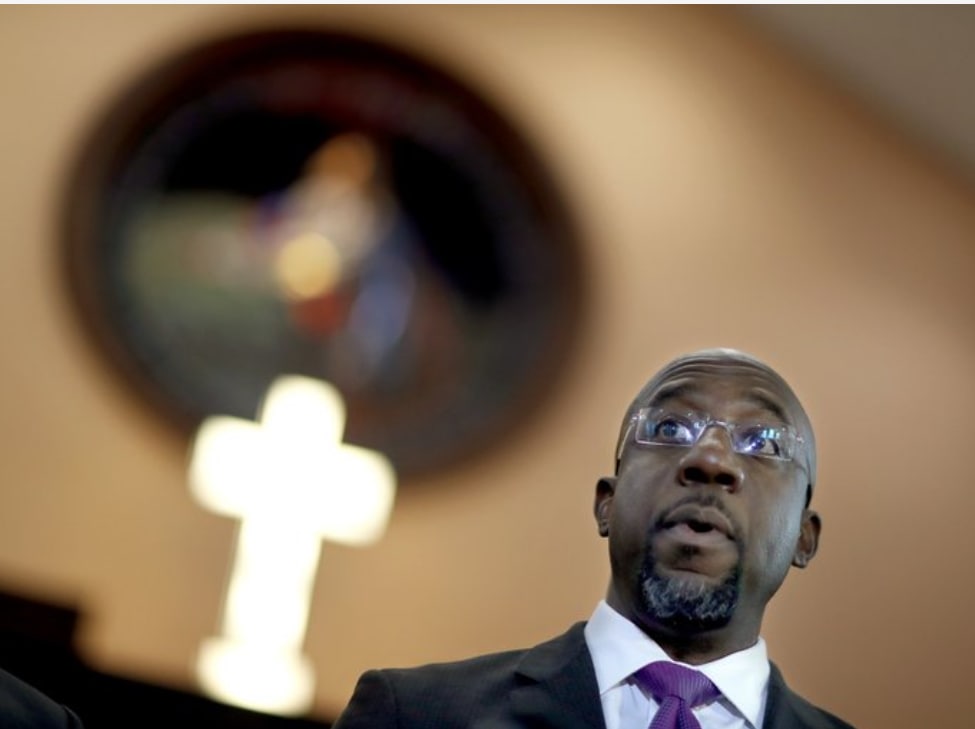 If the predictions hold, Democrats would win a majority in the U.S. Senate.

Democrat Raphael Warnock has defeated Republican U.S. Sen. Kelly Loeffler by a 1.2% margin outside the threshold for automatic recounts, while Democrat Jon Ossoff appears to have defeated David Perdue by just over 16,000 votes.

While the latter race likely will see an automatic recount as prescribed by Georgia law, the end result of the night is that Republicans lost two seats and Senate control along with the Presidency, a stunning reversal and coda of the Donald Trump era.

At about 12:40 a.m. Warnock addressed supporters in what sounded like a victory speech.

“I am going to the Senate to work for all of Georgia,” Warnock said. “Whether you voted for me or not, know this, I hear you, I see you. Everyday I’m in the United States Senate I will fight for you.”

“We were told that we couldn’t win this election, but tonight we proved that with hope, hard work and the people by our side, anything is possible.”

Earlier in the night, as of 10 p.m., Loeffler and Perdue held narrow leads over  Warnock and Ossoff, respectively.

Despite those leads, a handful of people had already declared victory for Warnock and predicted Ossoff would also pull ahead.

Cook Political Reports’ Dave Wasserman tweeted late Tuesday that Warnock had the race in the bag despite a vote deficit at that moment, arguing the math based on votes still left to be counted didn’t show a path to victory for Loeffler. Shortly after, Vox called the race for Warnock.

Just before midnight, Wasserman again tweeted his prediction that Ossoff would win.

Democrats win control of the Senate.

President Donald Trump, who even as Congress prepares to certify President-elect Joe Biden‘s win continues to claim rampant voter fraud and a stolen election without evidence, tweeted just before more votes from liberal counties were expected to drop that another stolen election was on the horizon.

Looks like they are setting up a big “voter dump” against the Republican candidates. Waiting to see how many votes they need?

Just before 11:30 p.m., after DeKalb County dropped a major share of votes, Warnock reclaimed a lead over Loeffler and Ossoff closed his deficit to less than 4,000 votes from more than 100,000. There are still some 20,000 early votes left to count in DeKalb. Those votes favor Democrats and even more so in the overwhelmingly Democratic county.

Officials estimate about 17,000 overseas ballots have yet to be counted as well as some 200,000 more domestic votes. About 98% of votes had been tallied by midnight.

Shortly after, former Democratic presidential candidate Andrew Yang tweeted a photo of him with Warnock welcoming him to the U.S. Senate.

Welcome to the US Senate Reverend Warnock!! 😀 pic.twitter.com/frD7r8esOM

Within minutes of Wasserman’s first call, Twitter began posting disclaimers with those tweets cautioning that many media outlets have yet to call the race for either candidate.

With 83% of votes counted as of shortly after 10 p.m., Warnock trailed Loeffler 51% to 49%. But the largest pool of outstanding votes were in DeKalb County, which borders Atlanta’s Fulton County and is a heavily blue county. About three quarters of votes were still outstanding there, a pool of votes more than large enough for Warnock to earn back his deficit and then some. Likewise, it could be enough to push Ossoff to a narrow victory over Perdue.

Still, no major media outlets had called the race.

The night presented a whiplash of back and forth, particularly in the Warnock/Loeffler matchup. Both Democrats started the evening with large leads showing more than 60% of the vote. But that early total represented largely counts from absentee and early voting, which favors Democrats. As the evening wore on and Election Day votes began dropping, the leads quickly narrowed and, at several points completely evaporated.

Warnock and Loeffler went back and forth in the 9 p.m. hour holding narrow leads. Ossoff, compared to Warnock, underperformed slightly and maintained a deficit throughout the night.

As more votes come in, the picture will become more clear about whether early predictions about a Democratic sweep will come to fruition, an answer that may not be clear until early Wednesday morning or perhaps even later in the week.

The race is a must win for both political parties. If Democrats win both races there will be a 50/50 split in the U.S. Senate, giving Vice President-elect Kamala Harris the tie breaking vote when she’s sworn into office Jan. 20 and Democrats the narrowest possible majority in the Senate. If Republicans win even just one of the races, they will maintain a majority and will have the opportunity to hinder President-elect Biden’s agenda.

As of now, however, it looks like a Democratic sweep.