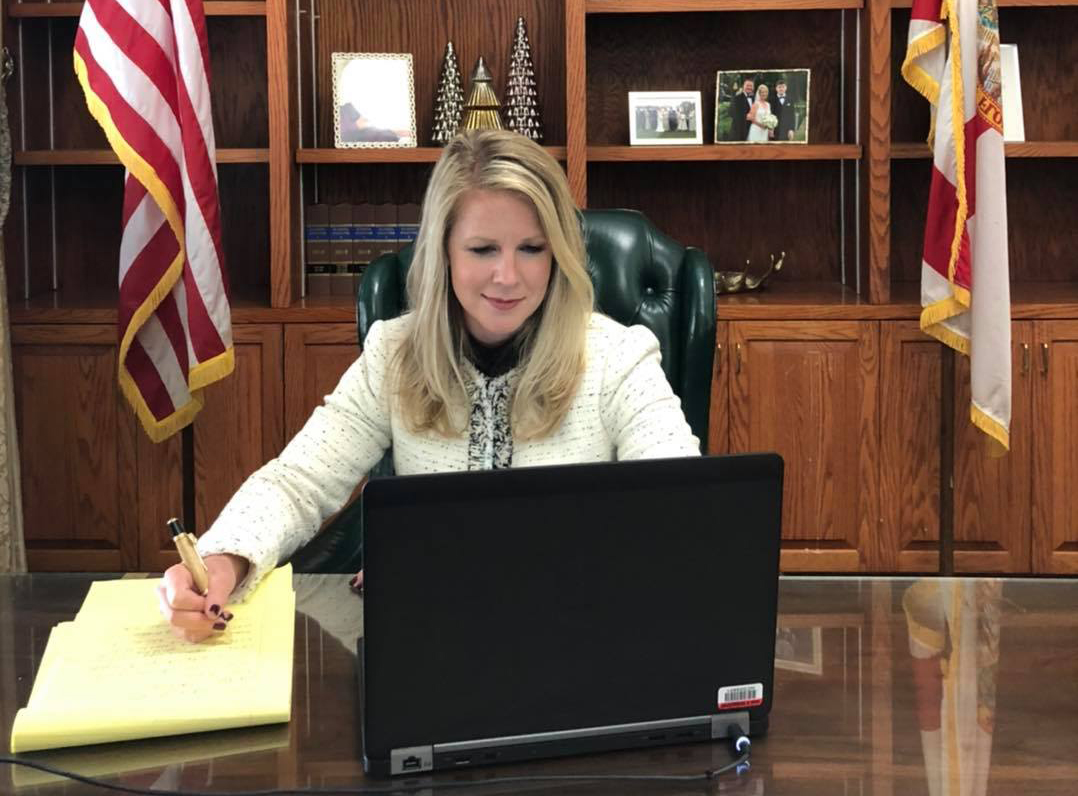 'Environmental issues are extremely critical in terms of our being great stewards of our state ...'

2020 was a busy year for Rep. Jenna Persons-Mulicka.

By May, she gathered enough signatures to get on the ballot to succeed term-limited Rep. Heather Fitzenhagen in House District 78.

Also in May, Super Lawyers named her a Rising Star Super Lawyer for the eighth year in a row. Super Lawyers rates lawyers and recognizes outstanding ones nationwide. Persons-Mulicka, who is a partner in her own firm, Strayhorn & Persons, P.L., in Fort Myers, was included among land use and zoning attorneys.

In June, she married David Mulicka, the CEO of Honc Destruction, a waste management company in Fort Myers, and became the stepmother to his 16-year-old son, Charlie.

On Aug. 18, Persons-Mulicka won the GOP primary with 59% of the vote, over former semipro baseball player and foundation leader Roger Lolly and pharmaceutical consultant Charlie Lynch.

HD 78 is a Republican stronghold, putting most of the action in the election in the primary battle. The race went negative after the candidates battled over Lolly’s accusation that Persons-Mulicka was really a “liberal.” Persons-Mulicka responded by accusing Lolly of paying his own salary with tax money earmarked for children with disabilities.

Peter Bergerson, a political science professor at Florida Gulf Coast University, weighed in on the intraparty mudslinging in the Fort Myers News Press saying, “it looks like you need a bulletproof vest to run in the Republican Party. I’ve seen the vitriolic ads. I haven’t seen it like this in 20 years here. … It’s just flat-out mean-spirited and vicious.”

Persons-Mulicka, who used just her maiden name for the duration of the campaign, immediately set her sights on the next challenge — Democrat Shawn Michael Williams. In all, she raised $328,000 for the race, compared to Williams’ less than $13,000, according to campaign finance records with the Florida Division of Elections.

Persons-Mulicka’s strong fundraising showing paired with the district’s conservative bent catapulted her to a decisive victory with 57.5% of the vote.

Within weeks, Persons-Mulicka hit the ground running in Tallahassee, attending Legislature University online to learn the ropes and then filing her first bills — seven altogether with more to come.

“I was fortunate to have studied the process in the past. It was a passion of mine to follow everything that was happening in the state. So, I was somewhat familiar with the process, but there were some new things I learned as well, and have enjoyed learning and continue to learn each and every day,” Persons-Mulicka said.

Her first legislative vote was one for the memory books.

“What was going through my head was that this is an incredible responsibility that I have. When I take this vote, I’m representing about 200,000 members in my home district. Wow!”

The first legislative bills Persons-Mulicka filed reflect some of her personal commitments. House Bill 3331 seeks $450,000 to support Lee County’s Bob Janes Preserve Restoration Project. The Janes project aims to keep creeks in northeast Lee County from carrying nitrogen into the Caloosahatchee River — thought to be one of the contributing causes to red tide.

“Our environmental issues are extremely critical in terms of our being great stewards of our state and passing on our piece of paradise to the next generation better than we found it,” Persons-Mulicka said.

Another bill she’s particularly proud of is HB 195, Transparency in Government Spending, which strives to make recipients of state or federal funds prove that they have spent the money for what it was intended.

“This is an issue that folks in my community have repeatedly said they care strongly about,” she said. “That funds earmarked for a specific and worthwhile purpose go toward that intended purpose and aren’t used to line the pockets of the executives or directors.”

All three of these bills are still in committee.

Persons-Mulicka is a sixth-generation Floridian, a Fort Myers High School graduate with bachelor’s degrees in both government and journalism from Evangel University in Missouri and a law degree from George Washington University in Washington.

Her new district office is in the old Lee County Courthouse. Down the hall from her new digs hangs a photo of her great-great-great-grandfather, John M. Powell, who served on the first Lee County Board of County Commissioners in 1887.

“I walk that way toward my office, and I see him — and then I go to work to serve the district,” the legislator said.

A lifelong conservative, Persons-Mulicka campaigned on a platform that included a commitment to water quality, anti-abortion policies and gun rights. She boasted in campaign materials her “A” ratings from the National Rifle Association and proclaimed herself a Pro-Donald Trump conservative. She was endorsed by the Florida Right to Life PAC and the NRA, among others.

Meanwhile, Persons-Mulicka — if all the other activities weren’t enough — is still busy changing her last name from Persons to a hyphenated version that reflects her marriage — Persons-Mulicka.

“It’s a process,” she said. “I got my new Social Security card today.”

Jennie L. Phipps is a writer and editor based in Punta Gorda.