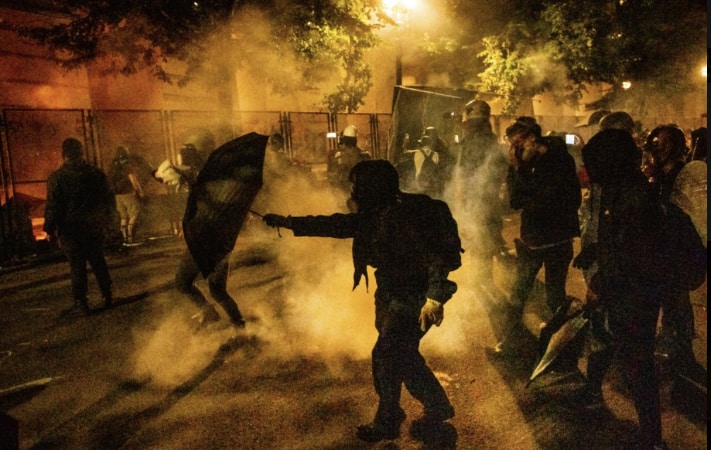 'You must pay the penalty, even if it’s a burden to law-abiding, tax-paying residents.'

Republican lawmakers carried legislation through a House subcommittee on Wednesday that would stiffen penalties against rioters.

The House Justice Appropriations Subcommittee advanced HB 1 by a 10-5 partyline vote, prompting some attendees to shout at lawmakers as they exited the committee room. The bill, sponsored by Republican Rep. Juan Fernandez-Barquin of Miami-Dade, has one committee stop remaining.

Among other pursuits, the proposal looks to enhance legal penalties against rioters, vandals and looters as a means to combat public disorder.

It would elevate consequences for battery, assault, or inciting a riot. It would also require a person arrested for unlawful assembly to remain in custody until their first appearance.

Gottlieb noted that if 1,000 people were arrested and deemed to be “acting in concert” during a riot, hundreds of private attorneys would need to be assigned.

“It is patently unfair to local governments, police agencies, state attorneys, public defenders’ offices, and clerk of courts, who will be forced to bear the burden of the consequences of this bill,” Rayner said. “You say we support law enforcement, but we are willing to saddle them with an undue financial burden.”

Brown shared that she was arrested during a protest outside the Florida Capitol in September.

“I can’t afford to keep paying you to have my freedom of speech,” Brown said. “It’s a right by everybody and every woman, man and child to express themselves because that’s how we got here today.”

Brown was among the roughly 68 speakers who were afforded less than a minute to address the panel.

“As history has shown, Black people will pay the price,” she said in comments that were echoed by many of the other speakers.

Unlike at the bill’s previous committee stop, Chairman Scott Plakon managed to maintain relative decorum throughout the meeting.

Notably, a man who told lawmakers to “f*ck off” was escorted out of the committee room. Plakon threatened the man with trespass.

Throughout the meeting, several sergeants at arms remained in the committee room. A handful of law enforcement officers, meanwhile, stood by outside.

At one point, Plakon reminded attendees that snaps, claps and jeers are not permitted.

Gov. Ron DeSantis unveiled his vision for the bill last summer amid a nationwide spree of riots and protests, spurred by fatal police interactions, including the high-profile police killing of George Floyd in Minneapolis.

Months later, Republican leaders vowed to fast track the bill after rioters breached the U.S. Capitol on Jan. 6. Several died in the siege.

The 60-page bill is expansive and notably broad, critics contend.

Among other provisions, it would allow citizens to challenge reductions to local law-enforcement budgets. Thereafter, the Governor and Cabinet would have authority to overturn the proposed reductions.

Other provisions include stiff penalties for blocking traffic during an unlawful assembly and defacing public monuments. Vandals would be required to cover repair or replacement costs, according to the bill language.

While the legislation is championed by Republicans and highlighted on FOX News, it faces strong opposition from Democrats and progressives.

Rep. Christopher Benjamin, a Miami Gardens Democrat who is Black, said the proposal’s potential costs are too high.

Gotltieb, a Miami Beach Democrat who is a criminal defense lawyer, argued that the enhanced penalties and new crimes in the “oppressive measure” would not prevent wrongdoing.

Speaking to members, Fernandez-Barquin contended the legislation is necessary, even in a state mostly spared from violent demonstrations.

“The first responsibility of government is to make sure our residents are safe,” he said. “The fiscal impact is not lost on me. But if you behave lawfully and peacefully, you have nothing to worry about. But if you participate in violence or commit a crime, you must pay the penalty, even if it’s a burden to law-abiding tax-paying residents.”

The Republican proposal moves next to the House Judiciary Committee.