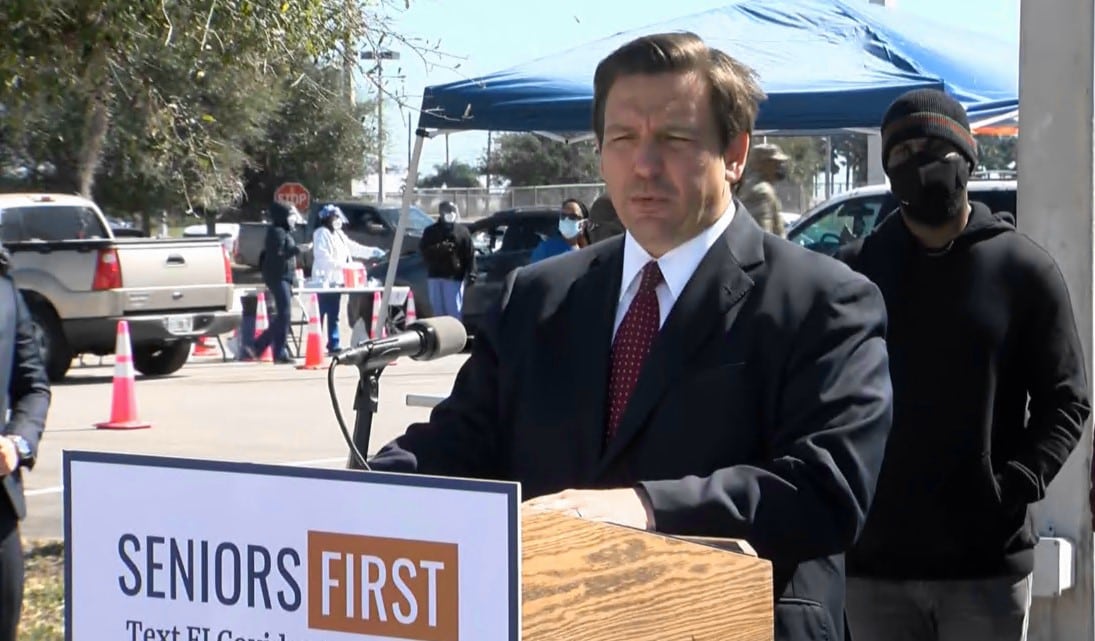 The Governor doesn't expect most young people to get vaccinated.

The general population under the age of 65 should be offered COVID-19 vaccines “relatively soon, certainly this month,” Gov. Ron DeSantis said Thursday.

Speaking at a vaccine site in Citrus County, the Governor stressed his strategy of vaccinating those over age 65 first. He contended that more than 54% of Florida’s seniors already have gotten at least one shot.

DeSantis was in Crystal River pushing to improve those numbers in Citrus and other regions where the state is lagging, and vowing to move to the next phase very soon.

The effort involved adding more retail pharmacies and grocers like Walgreens. And DeSantis said he expects 175,000 Johnson & Johnson vaccines to be delivered in the next couple of weeks.

“We are going to do even more Walgreens in the coming weeks and I think that will be particularly important when we get to the point where we are able to lower the age to below 65, which is going to happen relatively soon, certainly this month,” DeSantis said. “It’s just a matter of looking at how much vaccine we’re getting and how much coverage we’re getting for seniors.”

DeSantis expressed doubt that a majority of Floridians under the age of 50 will chose to get vaccinated.

He said the state will not mandate them to do so. He did not sound particularly concerned about encouraging younger people, and the Governor struggled Thursday to explain why they should get vaccinated.

“The lower you go in the age stratum, the fewer you’re going to have in terms of uptake from there. So I think there will be a much less percentage of 25 year olds that want it than 75 year olds. And I think that’s sensible because the risk is much different,” he said.

“So I don’t think you’re going to get above 50% of people under 50 and I think it may even be less than that,” DeSantis said. “But I think the messaging is important. When you have these people saying, ‘Oh yeah, you get vaccinated, you still can’t do anything. You got to social distance.’ Well, why would someone want to do it at that point if they’re not at serious risk?” DeSantis said. “So I think the messaging should be, ‘You know, the more people that get vaccinated, we’re going to be able to do whatever you want to do.'”

At the moment there are are numerous vaccine programs run by the state, counties, the federal government, and in some cases by hospitals, under myriad rules. The state program, dominant now, started with just seniors, but this week DeSantis opened it to educators, law enforcement officers, and firefighters as young as 50.

Some federal sites and retailers such as CVS that are going under federal guidelines are offering vaccine to all teachers, according to The Associated Press.

DeSantis tried to brush aside those reports, insisting that he applauded any efforts to get vaccines to seniors, but that he would only take responsibility for the state-run programs.

“The federal government is the one sending us the vaccine. If they want it to be for all ages, then they have the ability to do that,” he said.

He blasted the Herald’s story as “a poorly executed hit piece.” He said the programs highlighted by the Herald were not operated by the state. He said they were operated by a hospital that received early vaccine shipments. Yet he also said he supported the effort, because they targeted seniors.

Scott Powers is an Orlando-based political journalist with 30+ years’ experience, mostly at newspapers such as the Orlando Sentinel and the Columbus Dispatch. He covers local, state and federal politics and space news across much of Central Florida. His career earned numerous journalism awards for stories ranging from the Space Shuttle Columbia disaster to presidential elections to misplaced nuclear waste. He and his wife Connie have three grown children. Besides them, he’s into mystery and suspense books and movies, rock, blues, basketball, baseball, writing unpublished novels, and being amused. Email him at scot[email protected]