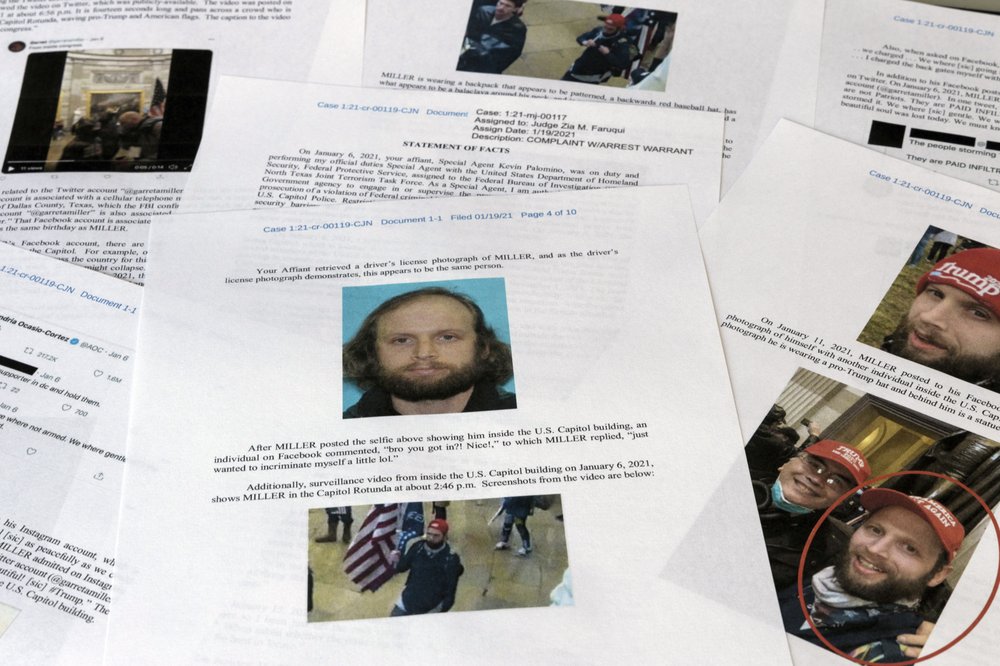 More than 300 people are facing federal charges in connection with the siege.

Garret Miller didn’t speak to the law enforcement officers who arrested him on charges he stormed the U.S. Capitol in January, but the T-shirt he was wearing at his Dallas home that day sent a clear and possibly incriminating message.

Miller’s shirt had a photograph of former President Donald Trump, and it said “Take America Back” and “I Was There, Washington D.C., January 6, 2021,” federal prosecutors noted in a court filing Monday.

Prosecutors are urging a judge to keep Miller jailed while he awaits trial on charges stemming from the Jan. 6 riots in the nation’s capital.

On a recorded call immediately after his arrest, Miller told his mother, “I don’t feel that I’ve done anything wrong and now I’m being locked up,” according to prosecutors.

Like many of the more than 300 people facing federal charges in connection with the siege, Miller thoroughly documented and commented on his actions that day in a flurry of social media posts.

After Miller posted a selfie showing himself inside the Capitol building, another Facebook user wrote, “bro you got in?! Nice!” Miller replied, “just wanted to incriminate myself a little lol,” prosecutors said.

After the Democratic congresswoman tweeted the word “Impeach,” Miller tweeted back to her, “Assassinate AOC,” according to prosecutors.

In a Jan. 10 post on Instagram, Miller said the officer who shot and killed a woman in the crowd of rioters should get a televised execution, according to prosecutors. Miller believed the officer was a Black man and called him a “prize to be taken,” prosecutors said.

“He will swing,” he allegedly wrote. “I had a rope in my bag on that day.”

“By bringing tactical gear, ropes, and potentially, by his own admission, a gun to the Capitol on January 6, 2021, Miller showed that he was not just caught up in the frenzy of the crowd but instead came to D.C. with the intention of disrupting the democratic process of counting and certifying Electoral College votes,” prosecutors wrote.

A federal magistrate judge in Texas ordered Miller detained after his Jan. 20 arrest. On Feb. 12, a grand jury in the District of Columbia indicted Miller on 12 counts, including civil disorder, obstruction of an official proceeding, and assaulting, resisting or impeding officers.

Miller’s attorney is seeking his client’s release from custody, saying he has expressed regret for his actions.

“Nevertheless, he has no history of violence, and he did not engage in any acts of violence in connection with the charged offenses, unlike many others who have previously been released,” defense attorney F. Clinton Broden wrote.

Miller remains jailed in Oklahoma City. His transport to Washington is on hold because he broke his collarbone while playing soccer in the recreation yard at a Dallas jail.