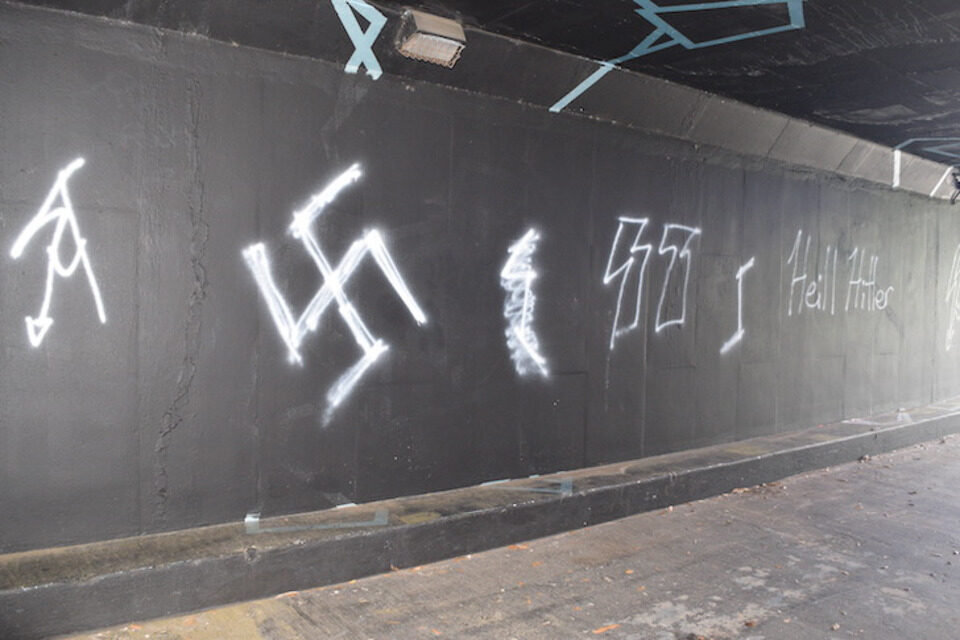 'As of now, it's being investigated as criminal mischief, unless we receive more information.'

A St. Petersburg mural inside the Ray’s Tunnel between Ferg’s Sports Bar and Tropicana Field was vandalized with swastikas and other Nazi symbols last weekend.

According to the police report from the St. Petersburg Police Department, investigators believe the incident happened sometime between March 20 and when the graffiti was first discovered on March 21.

Besides a giant swastika and the phrase “Heil Hitler,” photos requested by Creative Loafing Tampa Bay from SPPD show a variety of Nazi symbols spray-painted on the walls, including “NSDAP,” which is the acronym for the German Nazi Party, the Nazi Secret Service symbol “SS,” and the Sturmabteilung emblem, a symbol commonly used by White supremacists and neo-Nazis that originated from Adolf Hitler’s “brownshirts” paramilitary group.

Also tagged on the walls was “Liberal Ass Town Disgusting,” and a crude depiction of a crossed-out Hammer and Sickle symbol, which is used by the Communist Party of China, among other groups.

The graffiti has since been removed, and investigators say there are no suspects.

Yolanda Fernandez, a spokesperson for SPPD, told CL that while the graffiti is certainly hateful it’s currently being investigated as criminal mischief, and doesn’t yet qualify as a hate crime.

“We can’t call it a hate crime because there isn’t a direct victim, even though it’s something we’ll keep on our radar,” said Fernandez. “As of now, it’s being investigated as criminal mischief, unless we receive more information.”

Created in 2015 as part of the first iteration of the annual SHINE Mural Festival the “Blue Sunnel” mural (stylized “Blue SUNnel”) was produced by local artist Ya La’Ford, who is Jewish and Black.

The artwork covers the entire 85-foot underground space under Central Avenue, and features fragmented geometric lines that are meant to mimic the sun’s rays.

“I feel deep love for St. Pete and know that the reigning spirit here is one of inclusiveness and love. The artwork I create is designed to be a bridge that engages us to recognize our connection to each other and to our shared experiences,” La’Ford told CL. “This piece, in particular, stands out as a nod to the rising and falling of the sun and how each of our diverse paths reflects similar rhythms. We walk through the tunnel as a journey. My hope is that, as a community, we walk together with a loving heart and disavow hate when it rears its shameless head.”

While the incident may not qualify as a hate crime, it certainly falls under the description of a “hate incident,” which the Anti-Defamation League reports and tracks on a daily basis.

Over the past two years St. Pete has experienced 15 incidents related to hate, extremist and anti-Semitic behavior, reports the advocacy organization. Eleven of these incidents involved distribution of White supremacist propaganda, mostly from the extremist group Patriot Front. Four of the incidents involved anti-Semitic actions, and one case from 2019 was label as “extremist murder,” after investigators showed that William Shutt had ties to alt-right groups after he allegedly gunned down two Black men.

By contrast, 23 incidents were documented in Tampa during this same time period, while Clearwater had six incidents, and Sarasota had nine, says the ADL.

Overall, Florida witnessed a dramatic increase in hate incidents over the last two years. From 2019-2020, the state logged 380 incidents, which is a 92% increase from 2017-2018, when the state registered 197 total incidents.

This rapid rise in far-right extremism follows a year of pandemic-fueled racist attacks on Asian Americans, most notably last week’s shooting in Atlanta that killed eight people, six of which were of Asian descent. This incident is also not currently not being investigated as a hate crime.