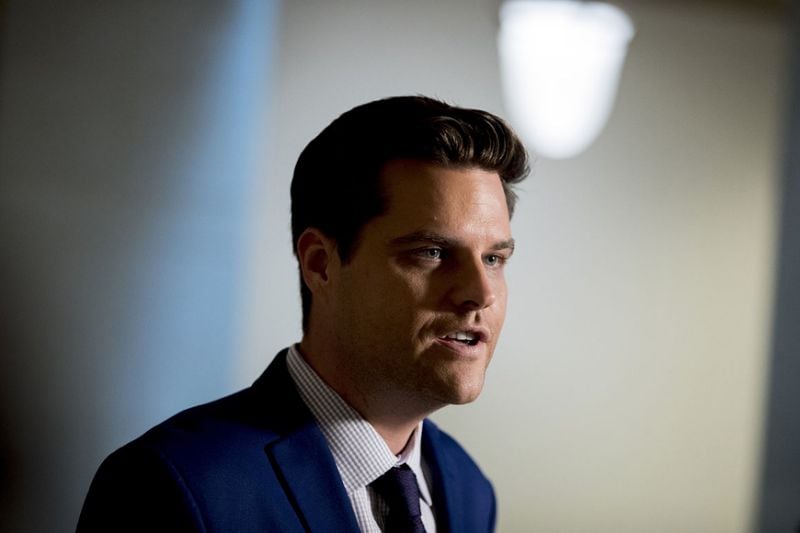 'Women for America First' stands with the embattled Congressman.

U.S. Rep. Matt Gaetz may be under federal scrutiny and the media microscope, but the embattled Congressman is still keynoting events.

The latest to be rolled out: an event for Republican women at the Trump National Doral in April.

The timing of the announcement is interesting, just hours before reports that Gaetz solicited the namesake of said hotel, President Donald Trump, for a preemptive pardon.

Gaetz is slated to be the keynote speaker at the Women for America First’s Save America Summit, alliteratively-titled “BBQ, Boots & Bluegrass” event on Friday April 9.

Women for America First, described by the Associated Press as a “pro-Trump nonprofit group,” is best known for the lengths it went to to object to the results of the 2020 presidential election. They started the “Stop the Steal” group, which was deleted from Facebook, and pushed their activism on the ground as well, reaching out to those who “questioned the integrity of the 2020 election.”

One of those rallies was, of course, on Jan. 6 in Washington, D.C. That “Save America” event would be the final such rally.

Gaetz is the most high-profile Florida speaker, but not the only one. U.S. Reps. Kat Cammack and Byron Donalds, both Florida Republican representatives, and state Rep. Anthony Sabatini, a Republican candidate for Congress, will all bless the mic, along with national notables like Georgia Congresswoman Marjorie Taylor Greene.

The Congressman’s keynote speech is the latest evidence that he will, as he put it in an exclusive opinion editorial for the Washington Examiner, “fight like hell” as his political career and “lifestyle” come under unprecedented scrutiny.

Gaetz, who has not been charged with a crime, is reportedly the subject of a Justice Department investigation for sex trafficking involving a minor. The investigation, multiple media outlets report, it tied to the indictment of former Seminole County Tax Collector Joel Greenberg, who goes to trial later this year on a charge of sex trafficking a minor. The New York Times reports investigators suspect both men were trading gifts and cash for sex with women met through apps including Cash App, and that a 17-year-old girl had sex with both men and another person involved in Florida Republican politics. The same article also contains allegations Gaetz used ecstasy during sexual encounters, and that he and Greenberg may have used access to the Seminole County Tax Collector’s office to obtain fraudulent IDs.

In the Examiner editorial, he said political opponents sought to “sensationalize and criminalize” his “prior sex life.”

“My personal life is and always has been conducted on my own time and my own dime. Consensual adult relationships are not illegal. Although I’m sure some partisan crooks in Merrick Garland’s Justice Department want to pervert the truth and the law to go after me, I will not be intimidated or extorted,” Gaetz asserted.

Although Garland indeed is the current AG, it was actually former President Donald Trump‘s AG, Bill Barr, who initiated the Justice Department probe of the third-term Republican.