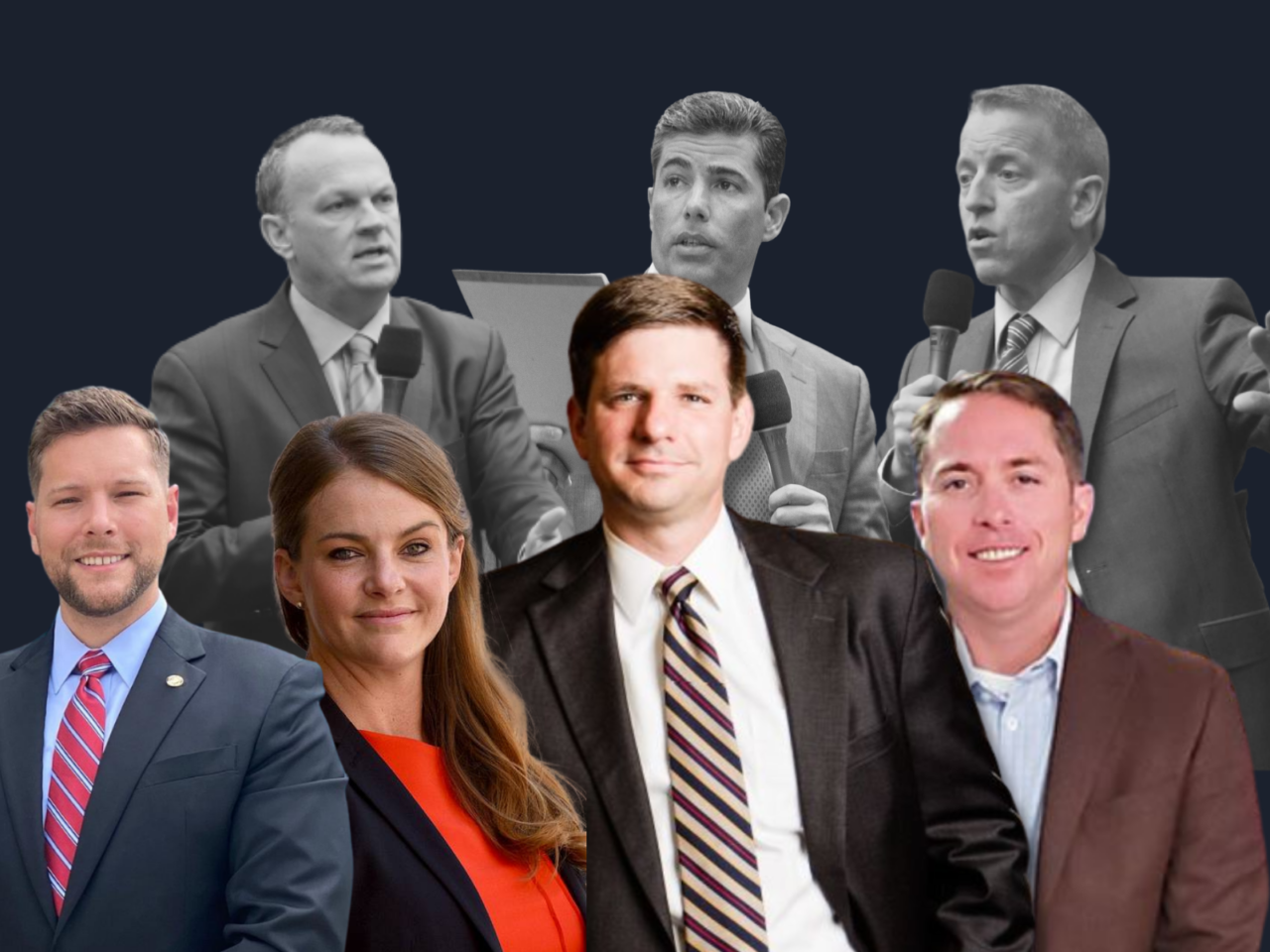 With three weeks left to Session, a handful of members are holding themselves out as possible alternatives.

Had the race for Florida’s House Speaker been decided immediately after the 2016 elections, it’s entirely likely that Hillsborough Republican Jamie Grant, who is no longer even in the Legislature, would be in line to lead the chamber next year.

After all, while he was technically a freshman in that class, he served previously and was a known quantity to many of the other members.

If it wasn’t Grant, the role might have gone to another contender, such as Brevard County Rep. Randy Fine.

However, the race was not decided after the 2016 elections. The House GOP caucus had changed the process at the direction of then-incoming House Speaker Richard Corcoran and his successor, former Speaker José Oliva.

Eventually, Palm Coast Rep. Paul Renner won the race after a single round of secret balloting during a closed-door meeting of freshman colleagues. Renner, unsuccessful in his first bid for the state House (by just two votes), impressed his colleagues with how he carried legislation to limit the use of economic incentives in Florida during the 2017 Session, according to Tia Mitchell, writing for The Florida Times-Union at the time.

“Paul Renner proved himself as a leader in the caucus, and he will be an excellent Speaker,” said Rep. Jason Fischer, one of Renner’s legislative class.

Changes in how the House GOP elects a Speaker came in 2016 after a series of leadership contests that ended messily.

Former Speaker Ray Sansom resigned before his first full Session in 2009 after being hit with criminal charges for his conduct as budget chair, though the case was eventually dismissed. Former Rep. Chris Dorworth, set to be Speaker in the legislative term that just ended, lost a reelection bid in 2012.

Also consuming House members that year was a fight over the leadership for the current term. Rep. Eric Eisnaugle originally appeared to be in line for the spot, but his support eroded, and Chris Sprowls supplanted him as his colleagues’ choice.

The new rules gave members more time to evaluate their colleagues before deciding on a leader.

Current caucus rules bar House members who want to be Speaker from campaigning for support from their colleagues until after they served together. Support couldn’t be rounded up before a full class of lawmakers had gone through their first Session.

Because House members are limited to four two-year terms, a group elected in the same year is generally referred to as a “class.” Each class selects the Republican candidate to serve as Speaker during their final term.

Candidates for Speaker are also barred from raising or spending money to influence GOP primaries in an attempt to decide the leadership race.

“If we’re going to have a 100-yard dash … everybody should start from the starting line at the same time at the same place,” Corcoran explained back then. “There’s nothing fair about having someone start at the 50-yard mark.”

Fast forward to today. Observers of the behind-the-scenes process that decides House speakers say the reforms are working.

Gone is the jockeying that takes place before members are even elected — so much so that next to nothing had been written about the race to lead the House after the 2026 elections.

But just because the water is calm on the surface, that doesn’t mean some members aren’t quietly reciting a mental count of their backers.

That said, here is the latest on the House Speaker’s race, as only Florida Politics can provide. For this story, FP interviewed more than a dozen members of the current class of House Republicans, as well as past legislative leaders and some of the political consultants involved in leadership races.

It’s difficult to say there is a race for Speaker because doing so would violate the Corcoran-Oliva rules, but one contender is quietly emerging as the clear front-runner: Rep. Sam Garrison.

That the Fleming Island Republican is in the pole position is a break with the early handicapping that pegged Rep. Jason Shoaf, with his redshirt freshman advantage, as a shoo-in for the job. But almost everyone we interviewed tells Florida Politics that a Garrison versus Shoaf race never really got off the ground.

That’s not to say Shoaf didn’t throw his hat into the ring.

The Port St. Joe Republican went so far as to host a handful of multicandidate fundraisers that many assumed were his way of campaigning for the position while still respecting the Corcoran-Oliva reforms.

But those events never gained momentum, as some donors and lobbyists close to Shoaf decided against writing checks.

Still, it wasn’t Shoaf’s soft flex that did him in.

Once members showed up in Tallahassee, the Corcoran-Oliva rules apparently worked as intended. As the freshman class got to know each other a bit better during committee weeks, Garrison’s stock soared.

Easily winning a race to succeed former Rep. Travis Cummings, the Clay County Representative deftly shepherded legislation this Session, including a controversial measure (HJR 1461) asking voters to eliminate pay for school board members. His bill to provide a public records exemption to university President applicants is also ready for the House floor — many capable lawmakers sought that change for years, but to no avail.

For a freshman, Garrison also built a successful fundraising operation. His committee, Honest Leadership, pulled in more than $50,000 in February, with more than $180,000 in the bank.

It’s clear — even with the cone of silence in place and no pledge cards circulating — that Garrison is the man to beat. Though there’s no race to concede, those sources close to Shoaf tell Florida Politics he is no longer “actively seeking” the Speakership in 2026, assuming Republicans maintain control of the Florida House.

According to an unofficial vote count of the 24 Republicans, Garrison is currently supported by at least 12 of his colleagues plus (we assume) himself.

So, Garrison is set to be Speaker, right?

Not so fast, say a few other members.

There are still at least three weeks left to Session, and a handful of members are holding themselves as possible alternatives.

Reps. John Snyder and Fiona McFarland have designs, although it’s unclear how deep their support is.

In his first Session, Snyder proved to be a capable sponsor. As a Marine from a law enforcement family — his father is Martin County Sheriff William Snyder — most of the Stuart Republican’s legwork has been on criminal justice bills.

The highlight so far is HB 921, which seeks to expand Florida’s law on written threats to include social media posts. It cleared the House unanimously, and it has legs in the Senate, too.

Like Garrison, Snyder would not even confirm he is a candidate for Speaker and is respectful of the process in places.

“Speaker Sprowls has shown tremendous leadership in setting forth a bold agenda and clearly communicating the rules of the chamber,” Snyder wrote in a text message to Florida Politics. “The rules are working and have helped foster a very collegial and dedicated body. I am hyper-focused on continuing the mission of keeping our businesses open, preserving public safety, and working on policy that allows all Floridians to thrive.”

Florida Politics’ assessment of Snyder: Don’t count him out. While Garrison is firmly in command of this race, one elite-level lobbyist explained that Snyder has about nine or 10 members of the freshman class at least open to the idea of choosing someone other than Garrison.

While respectful of Snyder (or any other member), Garrison backers don’t see that.

“They just don’t have the math,” said one top GOP consultant tracking the intraparty dynamics.

As for McFarland, she makes an interesting, perhaps timely, case.

This year, the Sarasota Republican was selected to carry one of the Governor’s top legislative priorities, a digital privacy bill cracking down on personal information sharing. She also landed a seat this year on the high-profile House Pandemic and Public Emergencies Committee.

A Naval reservist who studied leadership in the U.S. Naval Academy, McFarland holds a solid reputation as a veteran stationed on a warship in the South China Sea. But she also has communication chops from time spent in the Pentagon, where she honed a rapport with media and an easy style with communications that helped develop strong relations quickly within the House. And with an MBA from the University of North Carolina, she also has business acumen.

When it comes to the political side of the job, McFarland is nothing to sneeze at. A prolific fundraiser connected to Trumpworld through her mother, former Deputy National Security Adviser K.T. McFarland, which means she can rally donors during campaign season. That helped McFarland in 2020 when she helped flip one of five blue seats that went red last year, carrying the open House District 72 race with a nearly 10-percentage-point victory over Democrat Drake Buckman. What makes it even more impressive is that Democrat Margaret Good won the last two elections in the district, and the race had been one of the top priorities to hold for Sarasota Democrats.

Of course, if there’s any downside, it’s that Democrats very much want to take this seat back; no Representative for the area has served a full eight years here since lawmakers put term limits into place. But with Republicans controlling the redistricting process, it’s likely the district becomes redder before the next election. McFarland also has close ties to Republican Party of Florida Chair Joe Gruters. His Senate District encompasses all of her House district, which required the two to work hand in hand on local issues. They also share a campaign consultant in Max Goodman.

Like most on the list, McFarland brushed off questions when asked directly about leadership: “This is a really strong class, and this is a member-driven process.”

But as an aside, an act of human goodwill may help her in a strange way. McFarland offered a free T-shirt to resident House gadfly David Serdar, which he started wearing to every House meeting, talking about every bill.

Still, McFarland’s road to Speaker appears to be an uphill affair. A consultant who had worked with House candidates explains that she very well could turn out to be the Erin Grall of this class, a reference to the Republican lawmaker who earned just one vote during her campaign for Speaker (but, as her legislative career has progressed, also proved to be a respected, capable member).

Although House Republicans reformed the process of picking a Speaker-to-be in 2016, there really isn’t a timeline for when that process is supposed to begin. It just can’t start until after members of a class go through one Session together. The 2021 Session is set to end in three weeks. After that, any member of the class can request a meeting of the caucus.

Were that meeting to occur on June 30 (the Caucus rules say that day is the earliest a vote can take place), Garrison will likely be selected by his colleagues to, at one point, serve in the second most powerful position in state government.

If (to paraphrase the famous wedding statement) anyone can show just cause why that shouldn’t happen, let them speak now or forever hold their peace.

nextSunburn — The morning read of what’s hot in Florida politics — 4.12.21