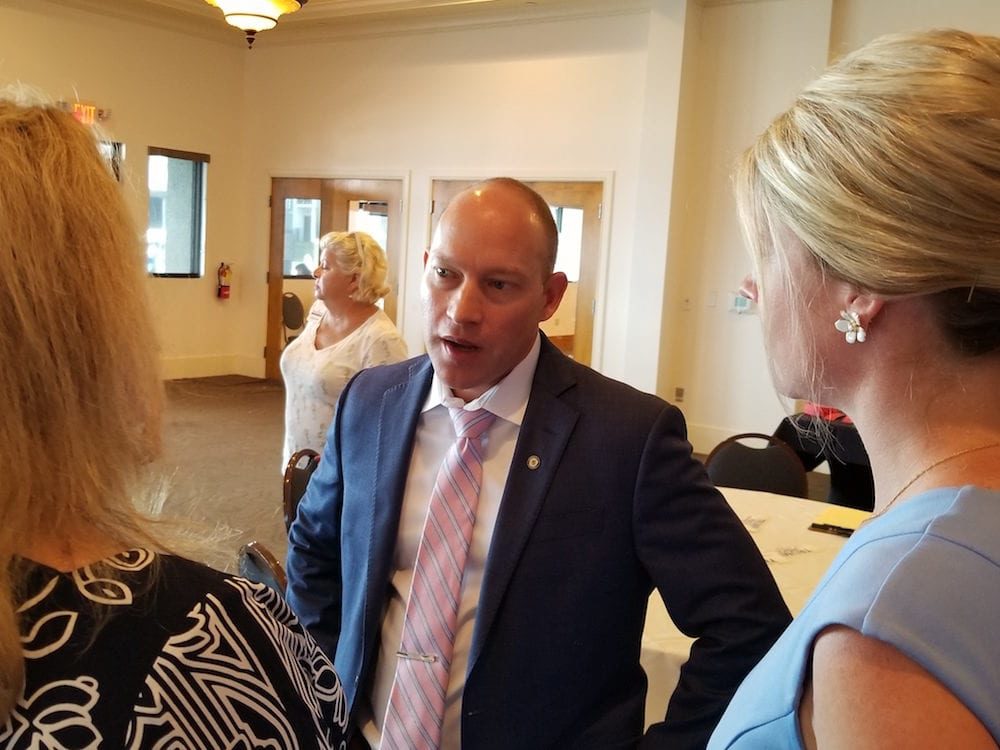 Most of Lee County’s Legislative Delegation signed onto a letter demanding local schools dictate what restroom transgender students use.

“We urge you to immediately discontinue or cancel any policies that allow male students and faculty members to use the girls’ bathrooms and locker rooms in Lee County Schools,” reads a letter from Rep. Spencer Roach, chair of the delegation.

The letter is in response to a local controversy. Hundreds of residents showed up to a recent School Board meeting, according to NBC-2, to object to a poster hanging in county classrooms promoting a tolerant and inclusive environment for LGBTQ students.

Roach sides with those upset parents and wants that policy reversed. He said schools in the U.S. and around the world have long required students to use bathrooms based on the gender with which they were born.

He also noted the Legislature will help as many students as possible enroll in private schools to escape the current policy.

“We are expanding access to school choice and want to make it as easy as possible to get children out of schools embracing these movements,” Roach told Florida Politics.

Equality Florida, which helped develop the best practices in use in Lee County and around Florida, said the district has a legal obligation to protect students from discriminatory policies.

“All school districts in Florida have a legal obligation to ensure every student is provided a safe school environment where they can learn and thrive,” said Jon Harris Maurer, Public Policy Director for the organization. “Equality Florida is proud to be resource to school districts as they craft their own policies to fully meet this obligation. For 25 years we have worked to ensure that LGBTQ students are supported in a manner consistent with established nationally recognized best practices.”

The letter sent by Roach is co-signed by all but one member of the Lee County Legislative Delegation. That includes Sens. Ben Albritton and Ray Rodrigues and Reps. Adam Botana and Jenna Persons-Mulicka.

The only member who did not sign the letter is Sen. Kathleen Passidomo, a Naples Republican in line to be Senate President in two years. She said it’s not the role of state lawmakers to dictate policy to the School Board.

“I don’t believe it is my role as an individual legislator to take positions on local issues,” she told Florida Politics. “If there is an issue that needs legislative action it should be presented to the Legislature in the form of a bill to be considered during a Legislative Session.”

Roach said his office has been contacted by 200 to 400 people objecting to district policies, and none have contacted him voicing support.

His letter referenced a bill passed in the House that would prohibit transgender athletes from competing in girls sports. The bill is nearly identical to a law passed in Idaho that has already been challenged in court. A federal judge blocked enforcement and the case remains on appeal.

Companion legislation, which was different in several facets including allowing transgender athletes, after a medical transition, to play on girls teams, stalled in the Senate after being postponed twice in the Passidomo-chaired Senate Rules committee.

Regardless, Roach said the school district’s policies stand in stark opposition to that bill.

He argued allowing transgender children and staff into restrooms will lead to an increase in on-campus rapes.

He pointed to an incident in which a 15-year-old South Fort Myers student was gang-raped by 25 boys on the high school football team. None of those boys were transgender, nor was the girl, yet they found themselves in the same bathroom.

But Roach insisted that if that’s what can happen even when boys and girls aren’t allowed to use the same bathroom, the situation will surely grow worse if transgender girls have permission to go in the girls’ locker room or restroom.

“I don’t think anything good is going to happen by allowing males in the girls’ bathroom,” he said. “The number of incidents that happen will go up once there is now a legal ruse.”

That’s similar logic was used several years ago for a bathroom bill passed in North Carolina that restricted transgender access to restrooms. That led to an exodus of business, entertainment and sporting events from the state, which in turn prompted a full repeal the law shortly after it was signed.

A number of states, including Florida, around that time considered bathroom bills but abandoned proposals.

But transgender activists already expressed concerns with local school districts, empowered by the sports bill debate and the recent passage of a parental bill of rights, will prompt county districts to implement their own exclusive policies.

Lakey Love of the Florida Coalition for Transgender Liberation, said Lee County may serve as an example.

“Lee County had bigoted constituents showing up at a School Board meeting complaining about objectionable materials,” Love said. “That threatens safe spaces for LGBTQIA students.”

Roach, for his part, maintains it’s the rest of the student body put at risk. He said his concerns are not about the small minority of students who identify as transgender but those who will abuse policy. He stressed his concern also isn’t just about students.

“I object for the kids and for the faculty members,” he said.

He made a comparison to teachers who engage in inappropriate relationships with students. Asked if he had any data showing a correlation between allowing transgender individuals access to locker rooms and both rooms and any increase in molestation, rapes or sexual assaults, he could not.

“I am sure you could Google it,” he said.

Roach dismissed any comparison between his demands for limiting bathroom access to school desegregation or Jim Crow laws.

“To my knowledge, transgender is not a protected category or class,” he said.

But the U.S. Supreme Court last July in an opinion written by Justice Neil Gorsuch ruled sexual orientation and gender identity were protected classes that should be safe from discrimination.

Roach, though, said he’s not arguing students should be denied access to bathrooms and locker rooms, just limit which one is used.

Lee County School Board Letter 04.23 by Jacob Ogles on Scribd

previousHouse signs off on tax ‘holidays’