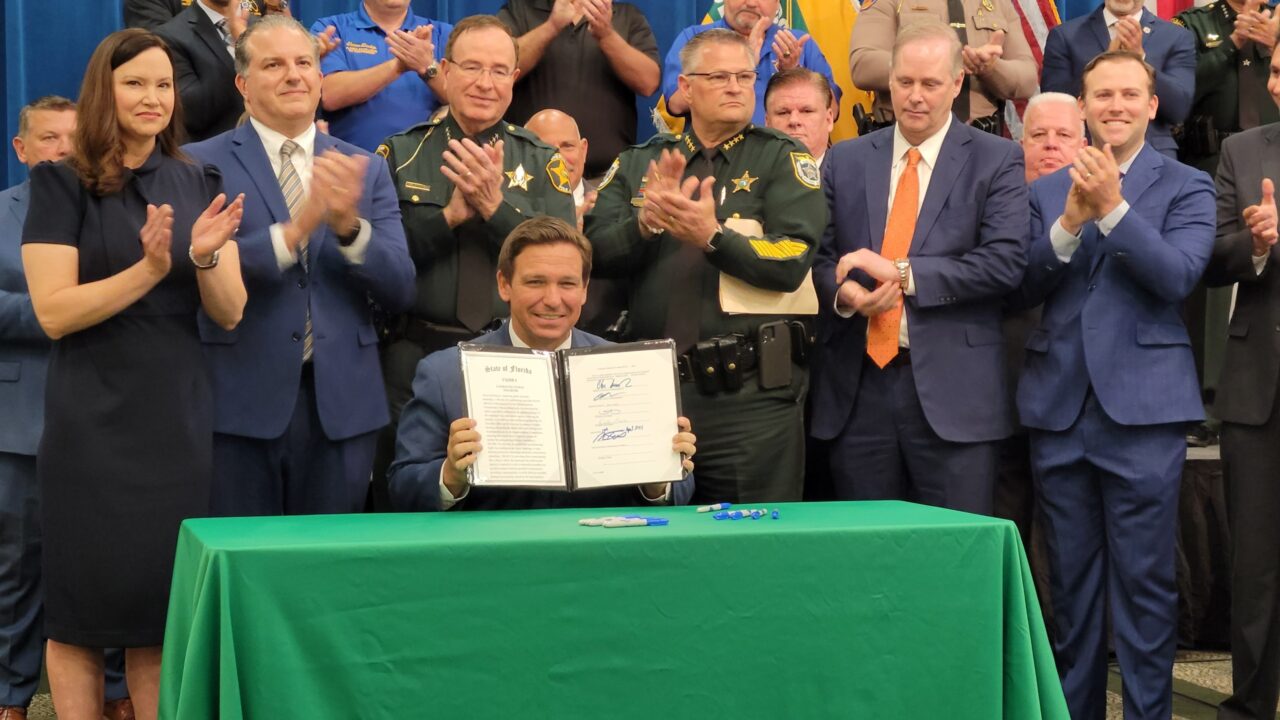 The checks will become official when he signs the budget.

Gov. Ron DeSantis hasn’t signed the bonus into law yet, but he is touring the state to tout $1,000 bonus checks on the way to first responders.

DeSantis named those bonus checks one of his priorities for federal relief spending under the American Rescue Plan. On Friday, lawmakers passed a spending plan through the end of the next fiscal year, including $208 million to make those bonus checks possible.

“Some want to defund the police,” DeSantis said. “We’re funding the police and then some.”

While DeSantis spoke on the steps of the Satellite Beach Police Department Wednesday, his lectern had a sign that read “Defund the Police” with a red slash through the “De” part of “Defund.”

He highlighted the state’s new anti-riot law he signed last month, which includes a provision against local governments disproportionately slashing funding for law enforcement agencies. That bill and the provision against “defunding the police,” a slogan among the far-left, followed nationwide Black Lives Matter protests last summer.

The checks are one way DeSantis wants to recognize the service and sacrifice first responders made to fight the virus. Many people across the country were able to work from home during the height of the pandemic.

“The people who wear the uniform, they didn’t have that luxury,” he said. “They were out there every single day — our police, our fire, our EMTs — and they had to work more than they ever have, not just to deal with protecting us when the pandemic hit, but then obviously how police were treated last year in many parts of the country was a total disgrace.”

Those checks will become official when DeSantis signs the budget, which he said would “hopefully be relatively soon.”

“In a year like no other, law enforcement remains steadfast to serve and protect, sometimes at the risk of their own family’s well-being,” Pearson said.

“You’re right. It’s not going to change their day or their month, but it certainly makes them know that they’re appreciated and loved by their Governor, CFO and their senators and their state legislators,” Kemp said.

During a third stop of the day at the Lee County Sheriff’s Office, DeSantis fielded questions on whether the anti-riot bill is directed at peaceful protesters, which he denied.

“It’s so good to have good economy, schools, all these great things that we always fight for. All of that collapses if you don’t have public order and public safety,” DeSantis said.

“It tells people, hey, if you’re in Portland, you think you can come down to Florida and do this? Stay out of our state. We don’t want you coming down here and causing problems.”

previousCOVID-19’s U.S. toll projected to drop sharply by the end of July