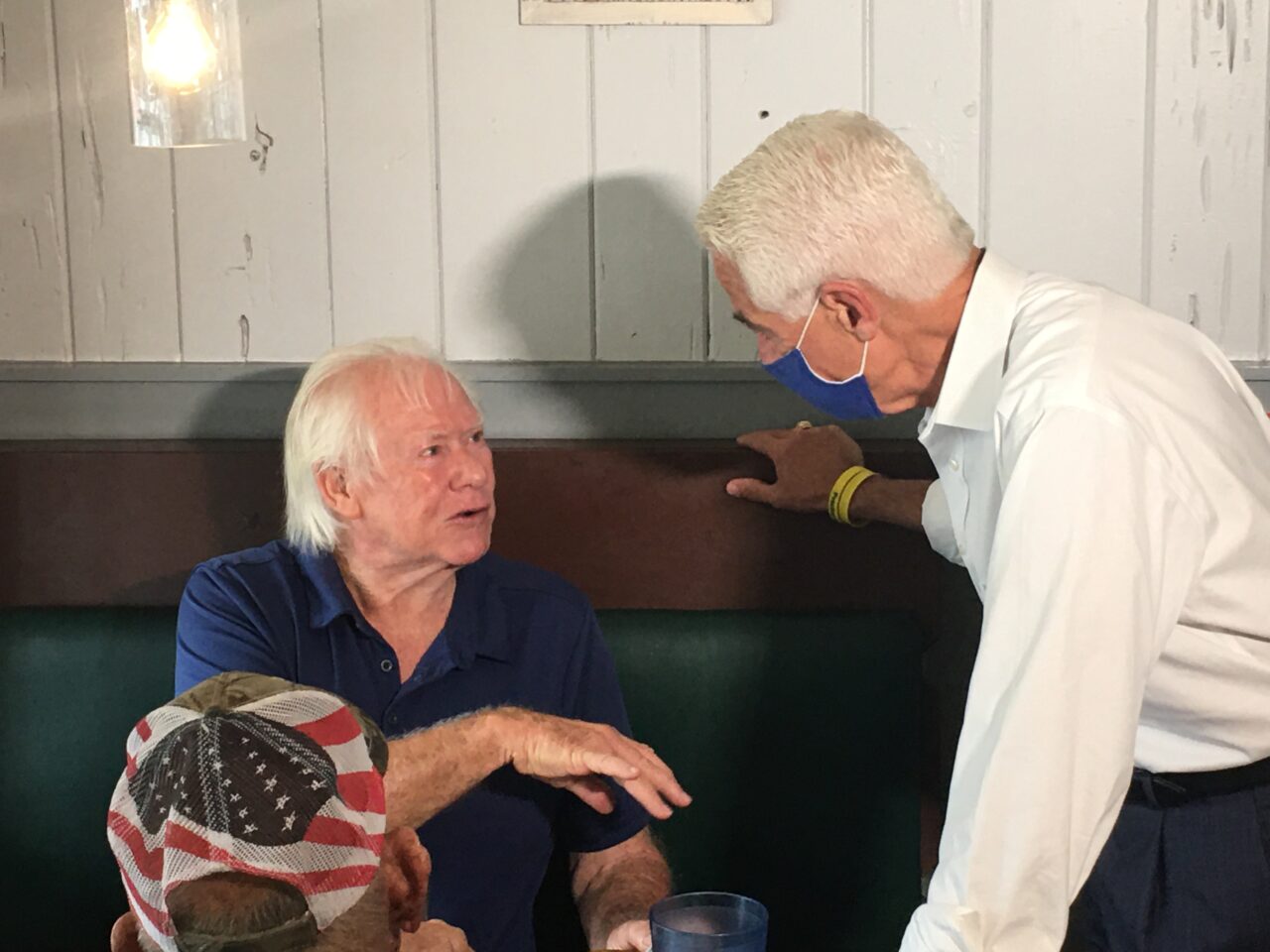 Day three of the 2022 campaign started in Duval.

The smell of pork hung in the air Thursday as former Gov. Charlie Crist addressed a crowd at his first of three campaign events in Jacksonville.

Democrat Crist started Day 3 of his current campaign for Governor with a distinct throwback flavor in Jacksonville’s Northside.

The former Governor and current Congressman visited the Pig restaurant on Lem Turner Road, a building and neighborhood largely unchanged in decades. And the supporters on hand had a timeless feel as well, showing that Crist’s path to the nomination runs through familiar ground.

The advertised event started just at the beginning of what would be a persistent rain, which followed Crist from Pensacola. The gathering was off the record; a television crew and reporters were advised to leave. Though, the campaign allowed the press to observe an event later.

Among the political names supporting Crist’s reboot: Jacksonville City Council member Reggie Gaffney, a Democrat who was (like Crist) a Republican before running for office in 2015. Gaffney is likely to be a state Senate candidate next year, and his family built a durable political brand in Jacksonville.

Crist was in top form, asking probing questions, engaging the crowd as “children of God,” and embracing the infamous Barack Obama hug that led to his excommunication from the GOP.

“Somebody took a picture, and I lived with it ever since,” Crist quipped, in a speech that touched on a range of subjects from voting rights to Crist’s “Day One” commitment to a $15 minimum wage for the state.

Despite being the best-known Democrat in the state, questions remain, given past performance and party trends.

In the 2014 General Election, Crist lost Duval County to Rick Scott by nearly 13% but defeated Nan Rich by more than a two-to-one margin in the Primary. With the county trending blue since, Democrats Joe Biden, Bill Nelson, Andrew Gillum, and Nikki Fried have carried it in recent elections.

In 2018, Fried performed well in Duval. And she has put in the work since the election.

Crist addressed the state of the embryonic gubernatorial race, including potential opponent Fried, in comments exclusive to Florida Politics after the first event Thursday. He described himself as an “underdog.”

“I think we need good Democrats everywhere to run, I really do. I would encourage any Democrat who wants to run for Governor to do so,” Crist said. “I would encourage them to just search their heart and decide what they want to do.”

Unlike the 2018 race, which got nasty, Crist said “of course” he expects a positive campaign.

“Listen, I think we all have the same goal,” he said. “We want to un-elect Gov. Ron DeSantis and give the people their voices back. That’s what this is all about.”

About outreach to younger voters: “You’ve got to go to colleges, go to universities, go where the people are. Young people, old people, middle-aged people. Go to all of them.”

As he said during the event, Crist vowed to go everywhere in the state, noting a visit Wednesday to Pensacola, which is not a historically Democratic hotbed.

One poll already puts the Congressman as a front-runner in the race, a fact he noted in wide-ranging comments to breakfast attendees. And he also made a point to mention a recent meeting with President Joe Biden about Florida’s infrastructure needs, a move the current Governor likely won’t make.

The Congressman closed the Duval swing with a lunch at the Soul Food Bistro on the Westside of town, where he listened to the concerns of activists and organizers at a lunch event.

Empathy went a long way, but toward the end, one wanted an assurance that Crist could win.

The Congressman will head next to Lake County, where he will talk to Democrats in Mount Dora Thursday evening.