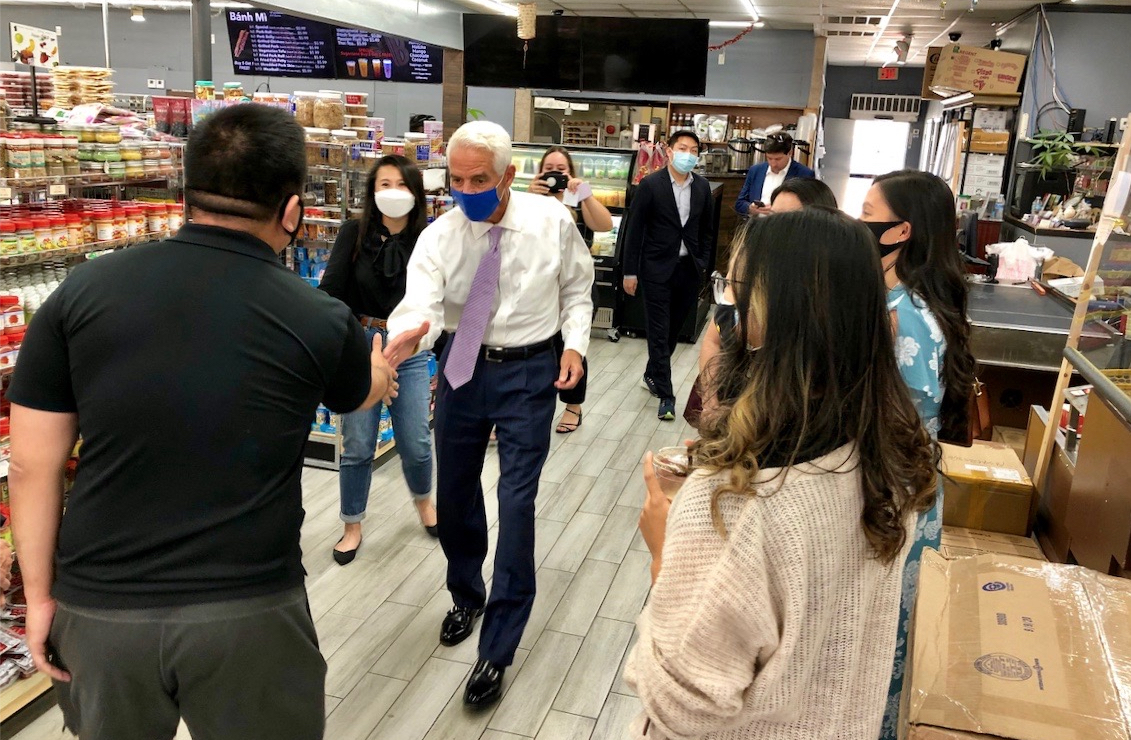 'It's all about Trumpism,' Crist said of DeSantis' efforts.

Crist, in Orlando to meet with Hispanic and Asian and Pacific Islander community leaders, also slammed the incumbent Republican, charging that DeSantis’ recent agenda, actions, and rhetoric are aimed at a national Republican audience, and further his effort to win a 2024 presidential nomination, not the 2022 Governor’s race.

“I think it’s to be able to be the Republican nominee for President,” Crist said. “I think he’s taking his eye off the ball a little bit. Everything I see him do lately is hard-right oriented, rather than doing what’s great for one of the most diverse states in the country.

“That’s what it looks like to me. I think it looks like that to everybody,” Crist said. “It’s all about ‘Trumpism.’ What happened to Florida, commonsense Florida values?”

Crist, a Congressman from St. Petersburg and former Governor, is in only his fourth day of his third campaign for Governor, for a 2022 election that’s 18 months away.

On Friday he joined fellow Democratic Rep. Darren Soto for a talking lunch with a small gathering of Puerto Rican community leaders in eastern Orange County, home to a large Hispanic community. They discussed education, health care, and small business needs in the community.

After lunch he met with several groups of Asian Americans and Pacific Islanders in Orlando’s Mills 50 district on the East Side, which features a large business district of Asian restaurants, stores, and services. They discussed the rapidly growing AAPI community in Orlando and Florida, the rising anti-Asian wave of hatred and violence, and efforts to counter that with positive messages about the community.

At the Hispanic lunch, also attended by Orange County School Board Member Johanna López, who also is executive director of the Alianza Center, Crist told the gathering that SB 90, the voting law signed Thursday by DeSantis, is clearly a voter suppression act, aimed at discouraging voting.

In particular, he criticized the measure’s new limits on mail-in ballots, saying it will make it more difficult for many Floridians like his parents, who are in their late 80s, to vote.

“It makes no sense unless it is politically motivated, which I’m sure it is,” Crist said. “It’s to suppress the vote of people who they don’t think are going to be voting for them.”

He contrasted that with an executive order he signed in 2008 to make voting easier, before the General Election, because of concerns about long lines at voting stations. He said he did so while he was still a Republican, at the behest of Democratic then-House Minority Leader Dan Gelber, now the Mayor of Miami Beach.

“Big difference between the current Governor and me. I signed the executive order to let more people vote,” Crist said. “And it led to (President Barack) Obama‘s victory. A lot of my now former Republican friends were not happy about it. And my response to them was, ‘well, when you get to be Governor, you get to suppress the voters.’ I won’t do that. I work for the people. I want to give them the right to exercise their right to vote.”

He then belittled DeSantis’ show-signing of SB 90 on Fox News, while barring Florida media from attending. Crist said it “adds insult to injury.”

“They allow one news outlet, Fox News, at his bill signing. And the rest of the free press in the state of Florida is not allowed to attend. That’s anti-freedom. It’s remarkable,” Crist said.